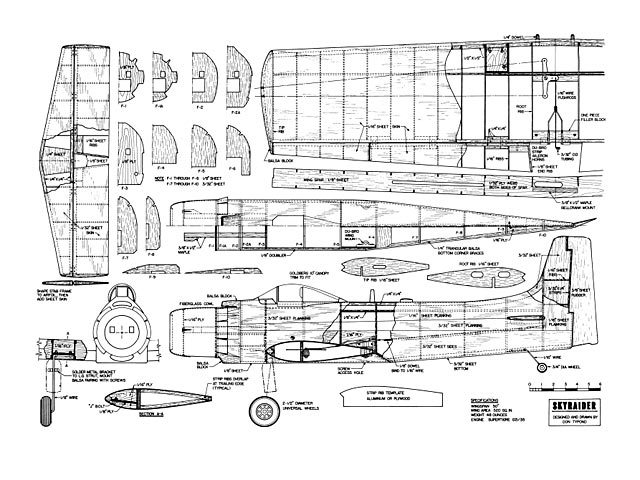 Quote: "What do you do if you're a Scale nut but also enjoy flying Controline Stunt? Well, there have been 'Semi-Scale' stunters from time to time, but frankly most of them weren't much more realistic than Nobler's with camouflage paint jobs. Then along came Al Rabe with his now well-known Mustang (oz6372) and Bearcat (oz5171) models, and recently there's been a rash of very realistic Stunt ships.

When I admitted that I could resist the temptation no longer, the next question was what airplane to use as a subject? I have this thing against putting propellers on distorted jet fighters - which seems to be the trend right now - so it had to be a prop job. Moreover, because I wanted the model to be as close to scale as possible, the prototype had to have near-stunt proportions to begin with.

The Douglas Skyraider is just about perfect. It has a big wing, huge tail surfaces, the right force moments, conventional landing gear - and besides, I like it. A bit of slide rule work showed that the wingspan could be scaled 1 in to the foot for a 50in span, while 15/16in to the foot would proportion the fuselage properly. An increase in wing chord was necessary of course, and the flap span was increased as well, but in general it worked out to be an Almost Scale model at, for all practical purposes, 1in to the foot. Another reason for the choice was that I'd always had this strange notion that not only should a scale pilot be installed in a Scale or Semi-Scale model, but that he should be as scale as the airplane.

What I mean is this; many builders detail their models to duplicate a specific airplane flown by a specific pilot, but no attempt is made to make the dummy pilot resemble the real guy. There's good reason for this, of course. Many times there aren't any photographs of the pilot to use as a guide, and in most cases even if you did make your dummy pilot look like the real person, no-body would recognize him anyway. However, Vietnamese General Nguyen Cao Ky is well-known, and many of us have seen him in newspaper photos and on television. He happens to have flown an AD, and the markings of his personal aircraft are shown in the Profile publication on the Skyraider.

So, with a Williams military pilot and a tube of plastic model customizing putty, I managed to get a reasonable likeness of General Ky to put in the cockpit of his Vietnamese Air Force Skyraider.

Because of the massiveness of the fuselage, and the fact that the wing is fully sheeted, the model must be built of the lightest balsa you can get. Balsa weight is expressed in terms of pounds per cubic foot, and ranges from approximately 4 pounds to over 12 pounds. Commonly avail-able balsa usually found in hobby shop racks is usually between 7 and 10 pounds.

Unless your local shop caters to contest Free-Flight builders, it probably doesn't stock light wood, but should be able to get it on special order. Almost all the balsa used in the Skyraider, with the exception of fuselage stringers and wing spar, was approximately 5 pound stock. It was ordered from Sig, and is marked; "Contest Balsa, Very Light 4-6 lb. Stock." Experience has shown that most of it is between 5 and 5.5 pounds. " 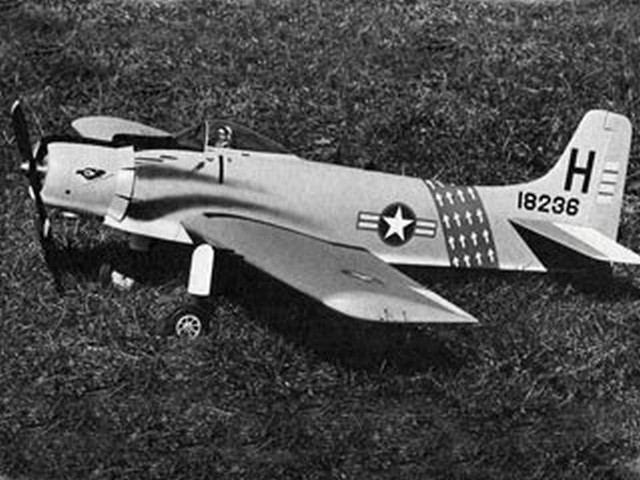