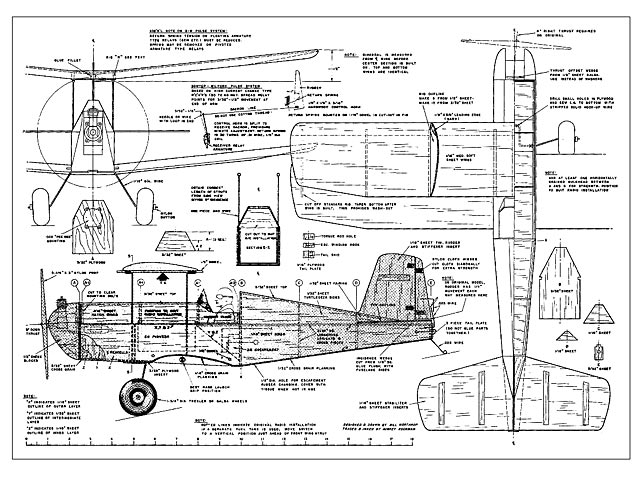 So you come home from a long, tiring day at work, shower, change clothes, and eat dinner. Then you step out the front door and observe a clear evening sky, just a touch of a breeze, the air has lost its heat, and you think to yourself - What terrific R/C weather! Why can't it be like this on the weekend? Darned field is so far away it's not worth the trouble packing all the gear - wish that bomb of mine wasn't so big, noisy, and wild; I could go down to the school football held, or that vacant lot back of the farmers' market - oh, well, what's the use? Guess I might as well stay home and try to do something useful around the house. Phooey!

Did your thoughts ever run along this pattern? And does that seven pound, 200 dollar monster have to sit idle between weekends? Tell you what we're going to glue, er, do. We'd like to introduce Li'l Beau Bipe - Mark II, yet. (Jaguar really started something.)

This little one-square-footer was designed around the Cox .020 Pee Wee engine and any of the latest calling card sized, single channel, all transistor, tone receivers. Our ship, while awaiting delivery of a CG Pioneer, was test flown with Jack Port's SM-1 operating on 45 or 60 volts B with an early Bonner SN escapement powered by two miniature pencells. 'A' voltage was tapped off of one escapement battery. Total radio and equipment weight was a heavy (for this size) 5-1/4 ounces. The total weight of the Pioneer set-up, including two pencells and the escapement is only 2-7/8 ounces. The ship, less R/C equipment, weighs in at around 5-1/2 to 6 ounces, and since the wing area is one square foot, it's easy to see that the wing loading is equal to the actual weight, somewhere around 9 ounces per square foot.

If a pulse system is preferred, refer back to the articles by Howard McEntee in the July and August 1958 issues of American Modeler. The pulse rudder arrangement shown in the accompanying sketch was developed by Tony Wilford and Kern Bowyer, fellow members of the Delaware R/C Club. Tony and Kern run a Dacron thread directly from the rudder to an extension arm on the receiver relay. A small coil spring mounted vertically in the fin pushes the rudder to one side, the relay pulls it to the other. Tony and Kern have successfully flown Pee Wee powered miniature (24 in span) deBolt LW Trainers this way for almost a year, using Ace's TR 4.5 and Babcock's Magic Carpet receivers.

While you send your son, daughter, or hired hand, down to the hobby shop for a few materials we'd like to - what? send your wife? man, you've got it made! - we'd like to give you a brief background on LBB Mark II. The first LBB was designed and built over a year ago. It was of 24 in span and weighed 15 to 16 ounces. In addition to the original, three others were turned out by fellow club members. All four were remarkably consistent - overweight. Two main reasons for this: 1) it's difficult to think small after building big clunkers that have reinforced 'reinforcement,' and 2) the scarcity of sub-lightweight equipment. The only one that did better than making powered landings was a % sized version spanning 18 inches. This bomb led its owner, Bob Scott, many a merry chase across the field as he attempted to keep the hand-held transmitter within the limited range of the troubled radio. This ship has been demoted to what it obviously preferred - free flight.

Not until early this spring did we begin to see the real potential in LBB when our past club president, Graham Lomax, installed a Deltron receiver in our prototype ship and started pylon flying around the fruit trees in his back yard. Coincident with this, Bill Davis ('nother member) installed a TR 4.5 in his using the pulse system previously mentioned and having knocked off about 3 ounces found he had a spare airplane to fly when his Multi-Bug was in the shop. Incidentally, anyone who was at the Sellersville 'Getogther' in 1959 can testify that a stiff breeze doesn't ground LBB.

Just recently it has been found that LBB Mark I flies just a little better (this old biplane lover hates to admit it) without the bottom wing. Several more have been built as parasol jobs with the notch for the bottom wing left out entirely. By staying on the key the owners are able to keep their ships within twenty feet of the ground throughout the flight. You're tempted to take a swat at them as they go by..." 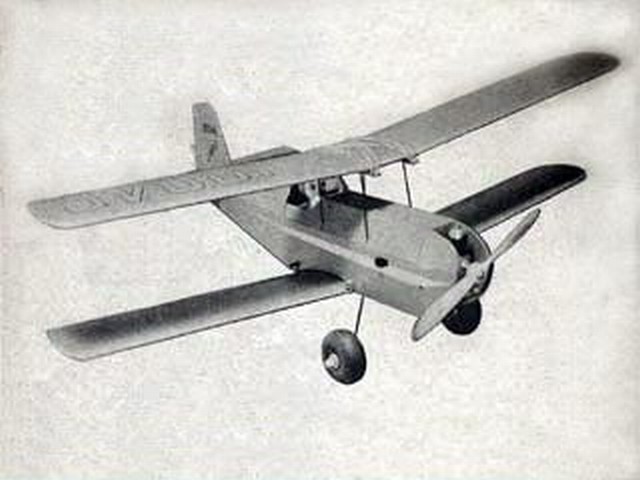