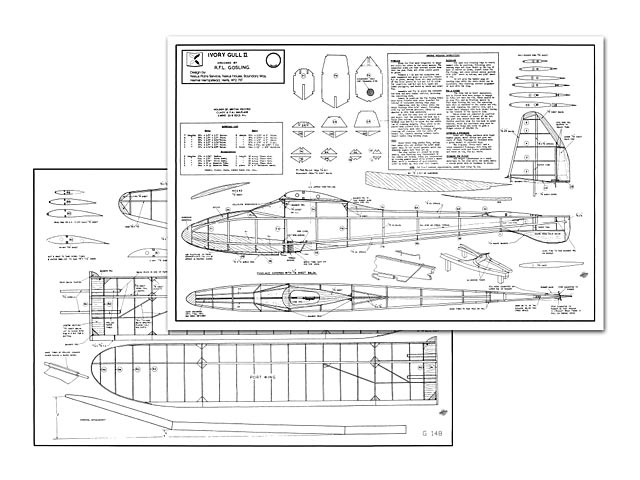 A particularly attractive glider model, designed and built by a well-known aeromodeller of many years' standing.

THIS glider is a development of the Ivory Gull from which it only differs in minor details, which have been incorporated as the result of a great deal of flying with the original and which culminated in a flight of 5 min 21 sec out of sight in the ME Cup Competition in 1939, when it was lost. Automatic rudder control was used on this flight and was found to be very effective when tow-launching. The original model was also flown HL with considerable success when slope soaring, in this case with the auto rudder control out of action and the rudder set central.

Fuselage: The two sides are built in the usual way on the side elevation of the full-size plans. The longerons are first steamed to the correct shape before the uprights are cemented into position. This is specially necessary if hardwood is used. The two sides are then placed upside down on the plan and the cross pieces cemented into position, starting at the centre. When these have set, triangular pieces of 1/16 sheet are cut and cemented on to these cross pieces, except where formers F.1, F.4 and F.6 are due to be inserted.

The covering of the fuselage is done with 1/16 sheet, the sides being cemented on first, then the bottom and top, the cabin being covered with sheet celluloid. A small piece of the upper deck between the nose block and former F.1 is cut out afterwards so that weight can be added in this bay in the form of plasticise and /or lead shot. Two small lengths of aluminium tube are cemented to the fuselage in front of the tail position to engage the pegs of the tail plane, also a paper tube to take the dowel to hold the rudder in position. Two 1/16 round lengths of bamboo to act as pegs are then cemented into position under the wing mount and strengthened by 1/8 in gussets; these are for the rubber bands which hold the main plane in position.

The fuselage is now carefully sanded, the corners being slightly rounded off. When smooth it is given two coats of banana oil with a light sanding between each coat, then the whole fuselage is finished with a coat of cream enamel.

Wing: The construction of this is quite straightforward and should present no difficulties. There are two breaks for dihedral in each panel and these are well gusseted. There are two spars one above the other and it will be noted that these spars are lighter in the outer panel than in the rest of the wing. The two halves of the wing are joined in the usual way by two loose birch dowels fitted into paper tubes with plugged ends, so that the dowels can be replaced if they should be broken.

Tail: This again is quite orthodox and should not present any difficulties. The two bamboo pegs for holding the leading-edge on to the fuselage should be left till last and when cementing into position see that the tail is in true alignment with the main plane when the latter is in position on the wing mount.

Rudder: This is built as usual, the trimming tab being built separately and fitted with wire prongs to engage the aluminium tubes which are let into the rudder. See that it is an easy fit and there is no friction when turning the tab. A piece of wire, bent as shown on the drawing, is cemented on to the lower rib of the rudder tab. When in position on the fuselage this will engage the wire from the towing hook, the opposite side having a small rubber band hooked over it and thence to a small hook on the side of the fuselage. The tension on this should only be sufficient to just bring the tab over to the right. A stop of balsa is cemented to the rudder on this side and will have to be adjusted by trial and error to find the correct amount of rudder required to give a circle of 200/300 ft. A stop on the opposite side prevents the tab from going past the central position while the glider is going up on the tow line.

Covering: The wings and tail are covered with light bamboo paper, red on the lower surface and white on top, the rudder being all white. After spraying with water and shrinking they are given two coats of dope. See that the wings are perfectly true while the -dope is drying. It is best to leave the wing in some sort of jig for 24 hours afterwards to prevent any warping.

Weight: Weight is now added to the nose after the model is assembled until the CG is approximately 50 percent along the wing chord.

Flying: First test the model by hand-launching on level ground on a day when there is just a very gentle breeze, launching into wind and throwing the model downwards in its natural gliding angle and judging the power of the throw so that it is just airborne when leaving the hand. The rudder tab is of course disconnected and left in the neutral position. Weight is now added or taken from the nose bay until the best gliding angle is found, and the model makes a steady glide with no tendency to stall and lands gently on its skid."

This was not published as a full sized plan. This was a 1/3 scale drawing, with full-size ribs and formers, as printed in the magazine in 1943.

Quote: "As the model has undergone various modifications during the season, it was thought that some notes on these would interest readers, especially those who have built this model from the Aeromodeller plan ...the original wing has a tendancy to flex a little under load, especially while tow-launching. I advise builders to plate with 1/16 sheet between the spars... "

Update 23/01/2019: Replaced this plan with a clearer copy, scanned from fullsize, thanks to KaoruKiyose. 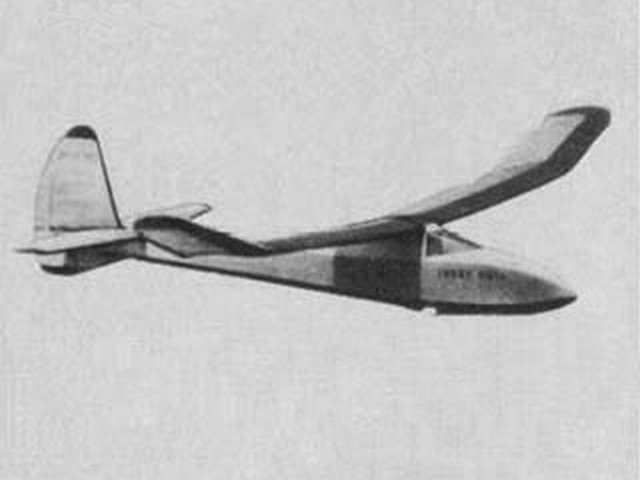