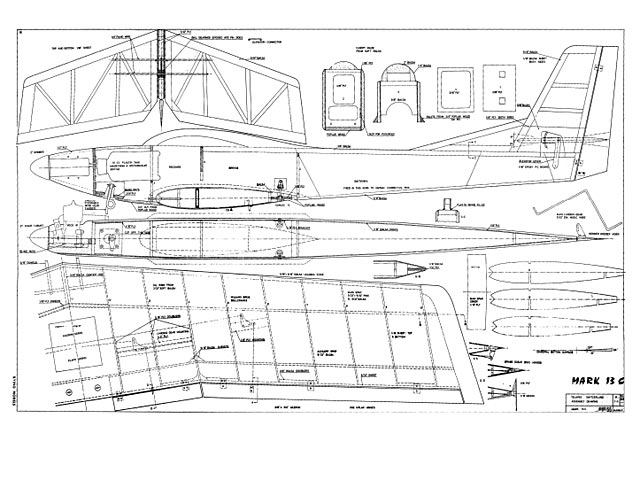 Quote: "The 'Mark 13C', from a large family of 'Mark' designs constructed for FAI competition, was the first to use a swept leading edge wing with flaps. This design, completed in late 1965, was the cumulative effort of building and flying fifty seven R/C models over six year period. A good many hundreds of hours flying time was gained during this testing period, carried out in all kinds of weather, and mostly with muffler-equipped engines.

The 'grandfather' and beginning of this series of designs was Chris Olsen's Uproar (oz2220) constructed in 1959. A good design in its day, which was flown through the year 1960 and retired in early 1961. While flying the Uproar extensively during this period, no less than six differently configured R/C models were built. These were designated 'The N series'. All used tricycle landing gear and progressed through such airfoils as NACA 0015, NACA 2415 and NACA 642A015. A considerable amount of experience, both in design requirements and in flight characteristics, resulted from flying these models in the Swiss Alps near Zurich. Concurrently two Orions were built along with three more "N" series models.

During the winter of 1961/62 a new approach to the ideal FAI competition model was made by constructing three models alike, designated BH 2-62 and a revised BH 7-62 model created. They faintly resembled the Senior Falcon. With the advent of this shoulder wing design, several different airfoils different wing shapes, wing tips and moment arms were used, in an effort to develop a highly maneuverable model capable of all FAI maneuvers in the thin mountain air of the Swiss Alps. A total of six Mark Is and five Mark Its were built - each with a wingspan of 1580 mm (60"), using a .45 engine, which were flown on Kraft reed systems. An article in MAN by Hal deBolt describing CAMLOC fasteners and their use influenced the Hubers to use them for the wing. Next off the assembly line were eight Mark IVs. Careful attention was paid to the placement of the components to provide adequate ground steering and correct CG location.

These eight Mark IVs flew more than 107 flights and considerable data was obtained by this type of model. Again, these Mark IV models were flown with muffler equipped engines, mostly K&B, Lee and Merco. During the same period a series of seven R/C models (named Kyros) each with a slight change in design were built and flown, using smaller engines, around the .29 size. They were primarily for the purpose of testing certain theories of aerodynamics in thin air. The final version (Kyros VII) was a 'T' tailed low wing with mock tip tanks using a Lee .45 Custom Engine..." 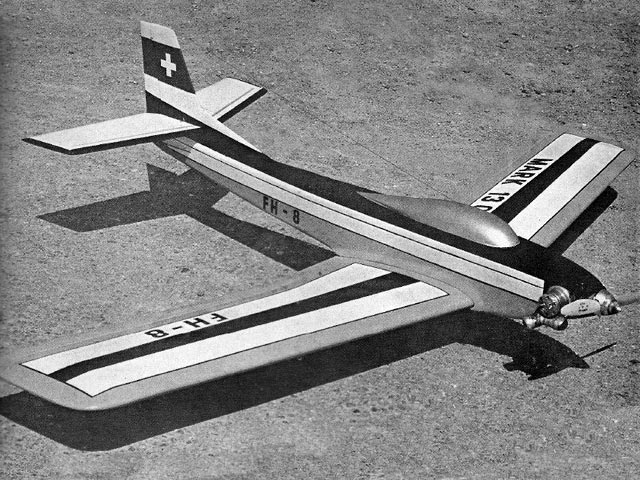