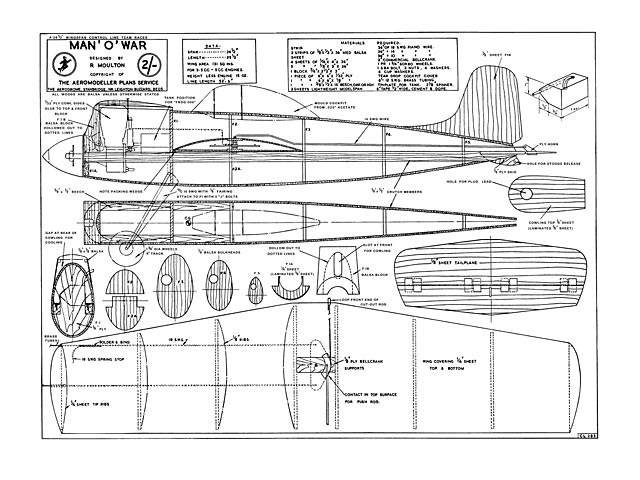 Quote: "NAMED after the famous race-horse reputed never to have lost a race, Man-o-War has been designed from experience gained in three previous team-racers.

The prototype was built around a DeLong '30' 5cc petrol motor, after an analysis of fuel consumption on all the suitable British motors, and the few American motors available to the designer. With a possible duration of 45-50 laps per tank, when run with coil ignition and petrol fuel, the 5 c.c. petrol motor compares very well with the average glow-plug motor of the same capacity which usually manages 30 laps.

If you wish to install an ignition motor, the coil should be mounted between F1 and F2 above the wing, the condenser mounted in the engine compartment and a hatch cut for access to the four half-pencell batteries which are mounted between F2a and F3. This will add up to 7 ounces of the total weight and will reduce the speed of the model because of the increased wing loading ; but it also saves at least one refueling stop in a ten-mile race and provides easy starting.

While the original held a steady 65 mph throughout its flights it is possible that glow-plug powered versions will increase this speed by up to 10 mph. The DeLong passed its peak long ago and is now a well-used and aged motor.

By departing from any attempt to provide a semi-scale version of a Goodyear racer, this model offers features found essential in the previous designs. Firstly, the alarming tendency to tumble tail over nose when landing, requires an undercarriage that is reasonably wide in track and very much in front of the centre of gravity. Secondly, the wise SMAE decision to make the minimum wing area large enough for manoeuvrability, also requires a free and generous elevator. Thirdly, to facilitate ease of starting, the upright motor is best, if one wishes to avoid the hazard of flooding. Fourthly, it has a new wing section, almost a segment of a circle, which combines the assets of fast power flying and good controllable glide qualities.

For the 1950 All-Herts Rally, the organizing St Albans club stipulates that a motor cut-out mechanism should be fitted. This is simply done by attaching a cut-out unit to the tank and passing a piece of 18 swg piano wire from it, through the bulkhead, to the bellcrank, so that, on sudden application of 'up,' the cut-out is jerked 'off.' To make this operation more positive, solder a spring stop to the 'up' lead out as shown on the drawing. This prevents accidental cut-outs when jockeying for position in a race. For 'Stooge' release, drill a hole in the ply tailskid.

BUILDING INSTRUCTIONS. Wing. Begin by butting the 1/16 sheet to make two sheets 1/16 x 8 x 36 in. Sandpaper each to the final finish desired on the wing surface. Cut one perfect plan view of the wing from one sheet and duplicate it with the addition of 3/16 along the TE. This will allow for the rib camber. Bevel the lower surface and add the ribs, making sure to allow for the lead out wires in the port wing..."

Update 31/12/2013: Replaced this plan with a cleaner version on white background, thanks to stormin. 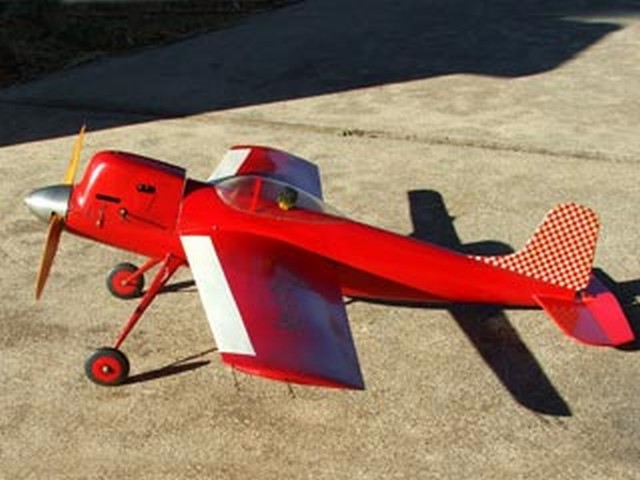