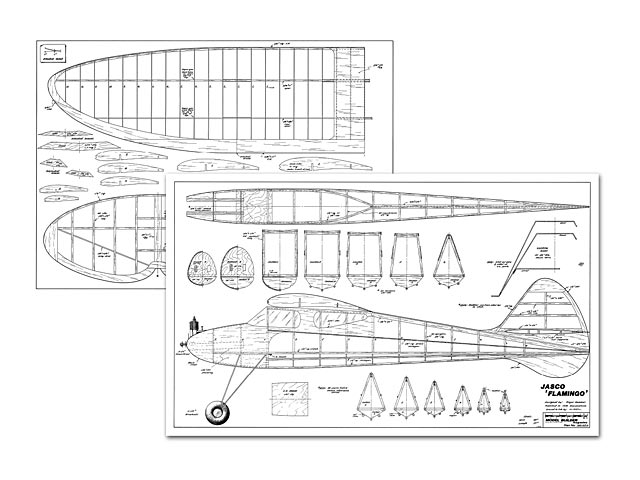 Originally from 1938 and designed by Roger Hammer. This here is a modern redrawn plan, printed in MB 1980.

Update 11/01/2014: Replaced this plan with a re-sized copy at correct wingspan, thanks to HarryD.

We had no sooner decided to feature the Jasco Flamingo as the Old Timer of the month, when here comes an issue of the SCIFS newsletter, the 'Flightplug,' and therein was a copy of the original Flamingo mini-drawing by Frank Zaic that first (and only) appeared in the 1938 Jasco catalog. It was originally designed by Roger Hammer in September 1937 and has remained virtually unknown to most OT enthusiasts ever since - at least up until about four years ago, when John Pond showed up at a contest with one.

It was the first time I had seen one of these rare birds, and while I thought it was a neat looking airplane it also struck me as having a 'different' look about, something hard to put into words. You'd have to see one in person to know what I mean.

This airplane is an excellent performer both as a free flight and as an RiC model. The original drawing includes these notes: Has excellent spiral stability. Flight characteristics: tight circle, very steep climb, tight circling glide and ballooning tendencies. That pretty much tells it like it is. More than once I've seen John flying his Flamingo - it's R/C - in his usual manner, ie stretched out in a lawn chair, beer in hand, transmitter sitting on the ground and the model way up there, methodically going round and round all by itself for several minutes at a time. No doubt about it, the Flamingo flies darn well as a free flight.

Let's take a close look at this airplane. The wing spans 89 inches and has approx, 1,122 sq in (maximum size glow or converted ignition engine under present SAM R/C rules is a .49). Other than the whopping 15-inch root chord, the only unusual feature is the 3/8 x 2-inch-wide solid balsa trailing edge. Choose this board carefully to avoid excess weight. For an R/C version, spruce spars, at least on the inboard panels, would be something to consider. The tail surfaces are conventional except that they make use of cap strips bent over a spar in lieu of regular sheet balsa ribs. Also, the plans call for a 1/4 sq stab leading edge, but that tight curve makes laminating this piece a necessity.

The fuselage is a curvaceous structure that has hardly a straight line anywhere. Construction is very light, and there are only a few formers to make. The Flamingo fuselage is notorious for being quite weak in the nose, and builders should see that this area receives some extra beefing up. A reinforced crutch would help, but what is really needed is some diagonal bracing or plywood carrythrough members to absorb the loads properly. This is especially important if you are building the model for free flight and plan on using a pop-up tail DT.

Up at the top left-hand corner of the original Frank Zaic drawing was this note: Kit for this design ready soon - watch for announcement. Hmmm, let's see that was only 42 years ago. Shouldn't be long now!" 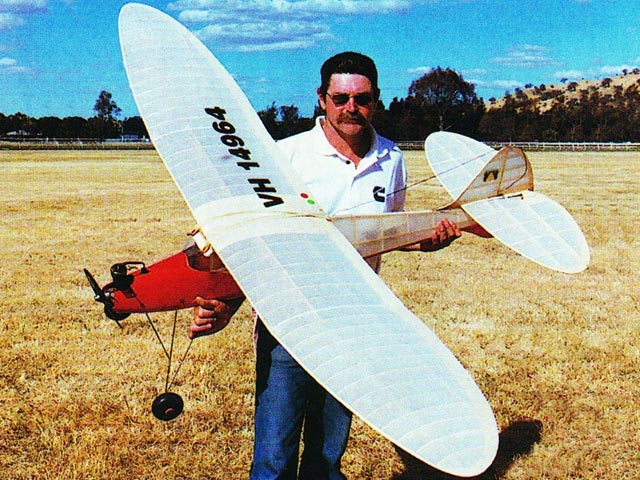 Hi Steve, the scaling on this plan as shown is way out! The fuselage needs to be enlarged by 12% to fit the wing as per plan and the tailplane needs to be reduced by about 3% As you state it pays to check the scale. Best regards,
ColinTheobald - 21/06/2013
Fixed, thanks. Actually it was fixed by HarryD 7 years ago, but fixed again now :)
SteveWMD - 25/08/2021
Add a comment