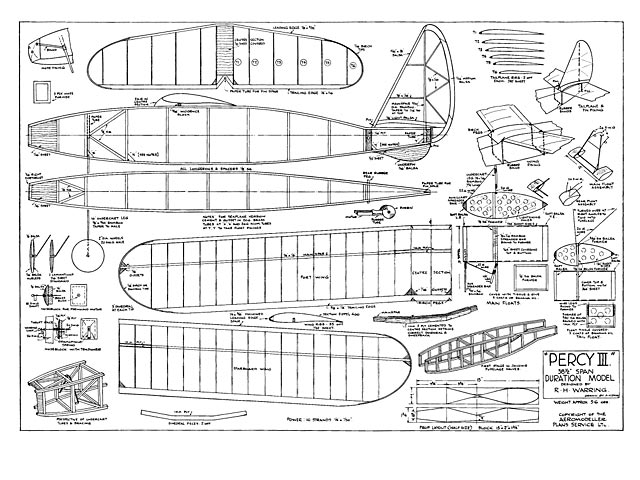 Quote: "This month we present a straightforward yet highly efficient contest model designed to FAI regulations and with a very fine performance. It may be flown equally well as a landplane or seaplane, full details for both versions being given on the plan, and should prove the ideal machine for the average flier. PERCY, by RH WARRING.

The original model from which the line of 'Percies' was developed first flew in early 1937 and was a rather unusual departure from the other models of that day on account of the high power weight ratio employed. The overall dimensions were quite small, wing span 35 in., with a parallel chord, swept-back wing, Clark Y wing and tailplane and a fuselage with a 'belly.'

This model has been duplicated by some of the junior members of the West Sussex Model Aircraft Society and holds the junior club record. Its climb is typically American - one terrific burst of power carrying the model upwards in a corkscrew climb, giving a 2 min duration on a 50 sec motor run.

It was felt that this model was too small and so, at the end of 1937, a further type was developed with increased span, altered fuselage shape and other minor modifications. Percy I, as this new model was christened, flew away on its second flight in the 1938 Gamage Cup and was eventually found six miles away, although the official time was only 3 min 46 sec OOS. It flew again shortly afterwards and this time was not returned.

Due acknowledgement must be made at this point to the influence of Bob Copland's famous 'Northern Star' upon the general design.

Percy II followed with a modified fin and larger prop. It was so successful that jigs were made for the model and six were built by different club members, the best four of which made up our 1938 National Cup Team. At Faireys, one of these models broke its prop. during test flying and also its rubber before its first competition flight. Despite this handicap the other models flew well enough to place the team seventh on the final results. All machines were coloured black and white with the word 'Littlehampton' in block letters on each wing. The effect was quite pleasing and many complimentary remarks were passed about them.

A further modification was made soon after to bring Percy up to more modern standards and so mark III was produced fitted with a fully cantilever, plug-in under-carriage. A pleasing increase in performance was noticed with this, the average duration being in the neighbourhood of 2-1/2 to 3 mins, with the same prop and power as before.

Various structural alterations were also tried at this stage and a sparless wing was standard for Percy III for a considerable time, see photos. What appears to be a spar in this photograph is really a thin strip of 1/32 in sheet balsa, 1/8 in wide recessed into the bottom of the ribs and was used only as an aid to covering. The tissue was secured to this and to the undersides of the ribs between this and the trailing edge, giving a true under-camber. Towards the tips the large leading edge was cut away slightly for lightness.

Percy IV was another step forward, but now became a specialist's model. A single leg undercarriage retracting forwards was employed with twin fins to give the necessary 'tricycle' for take offs. The tailplane was now placed below the fuselage at the rear (actually resting against the bottom longerons), in order to get a more robust fin construction as the depth of the latter did not then need to be so great.

The life of this Percy was not very long. After one preliminary hop, in which a slight stall was apparent, the next flight, made after the necessary adjustments, was 2-1/2 min on 400 turns. On 800 turns Percy took off smoothly, undercarriage retracted perfectly, and then disappeared straight up after 6-1/2 min. This flight was carried out in a large field near the sea coast and since the drift was towards the water there is little doubt of the fate of that model!

The model designed to replace this, mark V, had the same features with the addition of a two-bladed folding prop. However, it is still waiting to be finished, for at this time I was concentrating mainly on Wakefields and now, since the outbreak of war, I have had little time for even those. A sketch will be given next month of the main features of this model, but it is recommended that the standard Percy be built first and the mark V produced later as a 'special' model.

The seaplane version of Percy was produced by fitting floats to the mark II. In the accompanying plans, however, the necessary modifications to the mark III are shown. The performance of either of these as a seaplane is excellent..." 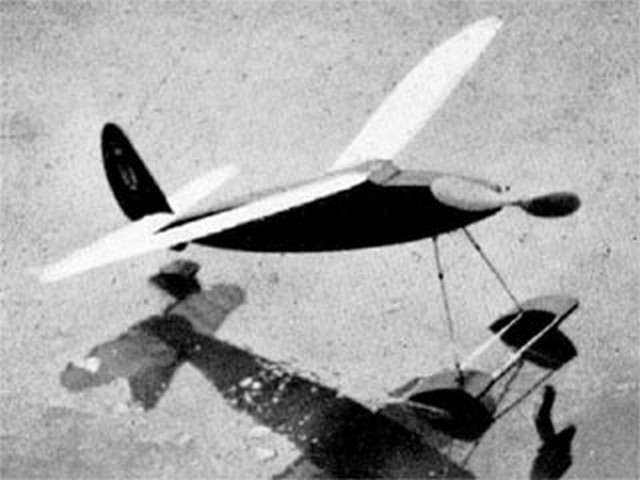