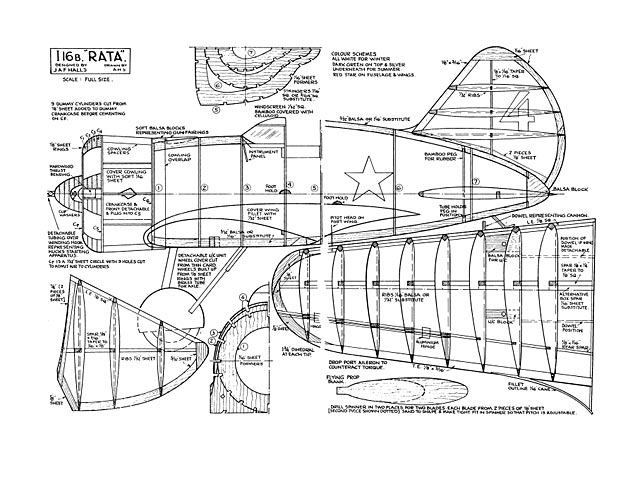 DETAILS of the Rata were given in the November, 1941 Aeromodeller, and readers who would like to try a model a little out of the ordinary should build this one. It is a very fast flier, fairly heavy (the original weighed about 3 oz), and thus balsa is not essential. Approximately 75 per cent substitutes were used in the original model which, however, was too nose heavy with the undercarriage attached. This was removed for flying and, using a hardwood propeller, the model was strong enough to take the strain of belly landings although it would be better to it over long grass. By careful choice of materials, this unbalance could be remedied, and an undercarriage permanently fitted.

Fuselage. Cut out the keels from 3/32 in balsa or 1/16 in sheet substitute. As shown in the plan, the bottom keel is made from two parts which should be stuck together and allowed to set on the plan.

The formers are cut from 1/16 in sheet and slotted to accommodate the 1/16 in square balsa stringers. A large diameter dowel is ustd as a building jig - a broom stick will do the job nicely - and the formers are mounted on this in their respective positions. Add the keels and stringers, taking care to get the line-up accurate. For hardwoods, a rather slower drying glue is better than balsa cement.

Wings. Rib A is cemented to formers 1, 2, 3, 4 and 5 on the fuselage. Build up the rest of the wings on the plan, firstly pinning the spars in their correct positions. Notch the ribs as shown and cement in position on the plan. Finally, add the leading and trailing edges which should be raised slightly by inserting small pieces of balsa between them and the plan. The wing tip is added after the wing has been removed, but be sure to get this true.

Tai/lUnit. Layout and cement together the fin outline on the plarl and while this is setting, cut out R1, R2, R3, and cement them in position on R4. When the outline has set, remove from the plan and cement in this other framework..." 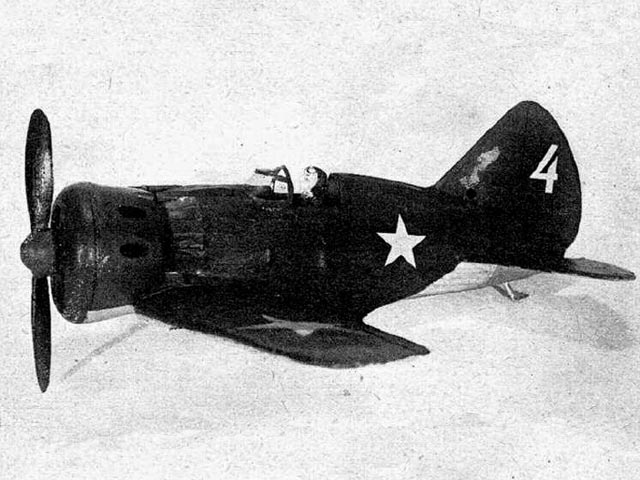 Are the cowling formers CsubF through Csub6 missing from this I-16 Rata plan? I know it’s probably possible to extrapolate forward from former # 1.
DonTilley - 28/07/2014
I think they are all circular, so are not drawn out in full, the assumption being we have all we need with just this drawing and some compasses to draw them out for ourselves. Probably. Certainly the plan says: 'CF is a 1/32" sheet circle with 9 holes cut to admit air to cylinders'
SteveWMD - 28/07/2014
....of course they are circular! Best way is to make up a jig as two interlocking rectangles to get the circular formers centred , fit 8 no, 1/16 x 1/4 stringers ,wrap with 1/32 sheet, then add copier paper with cut outs for exhausts and for the gills. Laminate up the front of the cowl from balsa and thin ply with the 9 cooling cut outs. Hot tips : omit every other rib behind the main spar to save weight and balsa (authentic war time shortage). Press the bottom of the cowl into some modelling clay, pour molton lead into the depression (take care but this is still legal in the Uk I think) cut off the equivalent section of the cowl, epoxy on your lead and you'll have ballast just where you need it. This model actually flies rather well. But why on earth was the wartime Aeromodeller bothering with this obsolescent Russian fighter when thy hadn't even managed a Spitfire ? And why would you bother when Richard Crossleys peanut from half a century later is infinitely superior. I will now admit that the reason mine [see more pics 003, 004] flew so well was that he trimmed it for me when we met at Old Warden... Yours
RichardFalconer - 30/07/2014
Add a comment