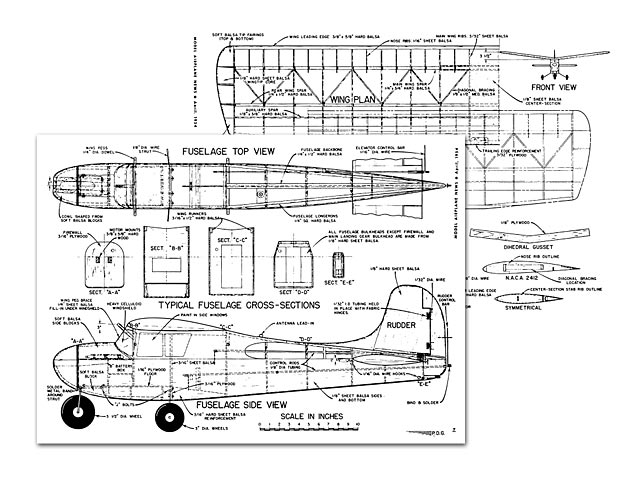 Quote: "After deBolt's experiments with the full symmetrical airfoil and short coupling, a la the U-control stunt, the High Diver was begun as a more moderate experiment, using convex undercamber (NACA 2412 airfoil) in combination with both rudder and elevator. Not only did results warrant this plan, but a number of interesting possibilities were revealed.

The elimination of ballooning is, perhaps, the most important. The minimum airplane that would incorporate sufficient structural strength to survive anticipated air loads imposed, by violent pull-outs, and, perhaps, inverted maneuvers, carrying two escapements and a really reliable complement of batteries, appeared to be approximately 3-3/4 lb gross (spun in on dirt, it broke a prop), which, at about 18 oz per square foot of area, works out to a little under 5-ft. span. To gain area without excessive span, an aspect ratio of about 5-3/4 to 1 was employed. The combination of airfoil selected and rather high weight meant a fast moving ship during elevator maneuvers, so moderate power, a K&B .15, was called for. A .19 would be murder on a small fast ship using flippers that really react, but will go nicely in a rudder-only version where high performance is desired. A 9 x 6 Power Prop allowed the .15 to rev up; despite the high pitch, the engine would over-rev in inverted dives, sounding like a speed ignition engine with floating points. Although a wedge tank, point down, will run off during any normal rudder-only maneuver, abrupt pull-outs impose G-loads chat compel a Walker pressure tank.

Flight characteristics, generally more like full scale than model, were different from any seen in 12 previous, more orthodox, layouts, so much so, in fact, that we misinterpreted hand glide symptoms and put the ship away for two months, thinking it a failure..." 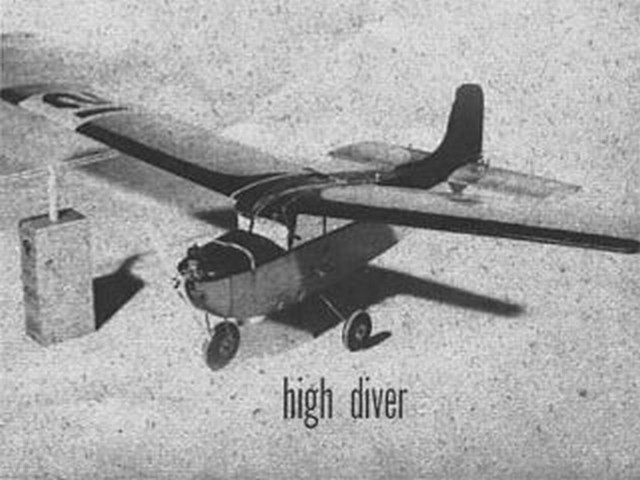