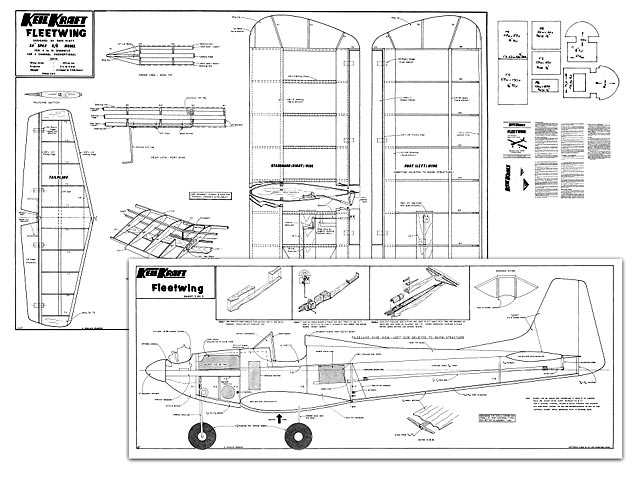 INTRODUCTION: The FLEETWING has been designed for those modellers who have progressed beyond single channel radio-control and have now become interested in the greater degree of control obtainable from multi-channel equipment. The FLEETWING is an intermediate step between the simplest forms of R/C and the complex, large and expensive full competition multi-channel models.

Using six channels, the performance of this model falls very little short of ten channel operation and, in fact. all but three of the manoeuvres possible with the large model can be performed by the FLEETWING. These three manoeuvres are: (1) the spin; (2) stall turn; which need rudder control and (3) inverted flight - which needs elevator trim.

The three controls chosen for the FLEETWING are: (1) Aileron - which is essential for the low wing type ; (2) Elevator - similarly essential and (3) Motor speed control. In no circumstances should the builder substitute a different control, eg rudder, for any of these three. However, rudder and/or elevator trim control may be added to the system if the builder possesses more channels of operation.

The most modem form of radio control - proportional, is very suitable for the FLEETWING and will greatly enhance the performance.

BUILDING SEQUENCE:
I. Start by joining the main spars and leading edges of the wing together in the middle using the braces D1 and D2. Ensure all angles are equal by pinning the parts next to each other while they set.
2. Pin the tailplane leading and trailing edges over the plan. with 1/2 in packings under each to hold the parts above the plan. Thread all the tail ribs on to the 1/4 sq tail spar but DO NOT CEMENT. Glue T9 in place on the tailplane leading edge.
3. Cement all tail ribs to the leading and trailing edges and tlin whilst setting. The joints between the ribs and the spar may now be cemented.
4. Select one of the wing mainspars, previously jollied and after cementing two W1 ribs together to form one thick rib, glue this rib to the mainspar in the centre, carefully holding the rib to bisect the dehedral angle of the spar.
5. When firm, pin the mainspar down over the plan in the correct position on the PORT plan. Now add the rest of the ribs in the port wing, packing up the trailing edges of all the ribs the same amount to align them properly.
6. Glue on to this assembly the 1/2 x 1/8 in TE strip, followed by the upper spar and the leading edge. Leave to set firmly.
7. Meanwhile, return to the tailplane. Remove from the plan and cement parts T6,11 and T8 in place. Carve elevators to triangular section and join with the elevator horn. Remove all pins from the tailplane and sand the LE and the TE to the correct sections. Finish by rubbing down the entire tailplane lightly with a very fine grade of sandpaper.
8. After carving angles into the elevator front to allow movement, hinge the elevator assembly to the tailplane. Ensure free movement.
9. Remove wing assembly from plan and pin down starboard lower mainspar to the STARBOARD wing plan. Slide all ribs into place between the two projecting spars and cement in place. Cement all Rib/leading edge joints..."

BUILDING this very pretty model was a a joint project, 'self and son. To be truthful, I intended to let him build it himself; but after opening the box and seeing all those pieces, I just had to have a go!

The model was built as per the plan, except for minor details. For instance, we found that by substituting the block upper fuselage portion ahead of the cockpit with formers and 1/16 sheet we had more room to mount the receiver vertically. We did not like the idea of the boxed-in elevator horn, so brought the push-rod out through the side of the fuselage with the horn under the left elevator so that adjustments were made easier. The DEAC had to be boxed in under the floor of the tank-bay; I normally don't like things built in out of sight, but there would be no difficulty in modifying the tank-bay floor to a removable one.

The junior partner in the project had firmly fixed the nose-leg to the rear of the front bulk-head, as per plan, so it was left thus. But why not have it on the front of the bulkhead, there is plenty of room for it and it could be simply removed without a lot of knife work?

The kit is very complete, and first class materials are used throughout, except for the elevator joiner, which was discarded as it was thought to be too soft and easily bent. A little knife-work was required to tidy up the bulk-heads and wing ribs, but on the whole, everything fitted perfectly. It was just a case of putting it in place and gluing it.

The model is intended for 3 channel proportional or 6 channel reeds, using ailerons elevator and motor. The plan shows the rudder glued to the fin. We hinged ours and made it adjustable with the aid of a Kwik-Link fixed to the fuselage side..." 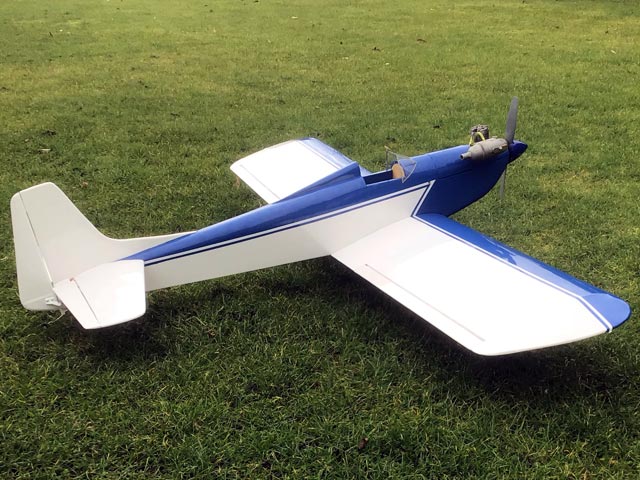 I built a fleetwing back in the seventies from a kit plan, the plan had dimensions on it so there were no problems with the result, building or flying. A good model all round. Is there a copy of this with measurements available? As I do not see how you can build from these drawings I have seen todate, or have I missed something? Thanks.
Baz - 31/10/2019
Looking at this plan, it seems to me everything you need is on there. All formers are shown, along with the wood sizes. The plan is fullsize, so once printed out, you can just measure other items off the plan itself? Or of course build the model on top of the plan, in the time-honoured fashion.
SteveWMD - 31/10/2019
The plan is from MY kit, don't remember KK ever giving material sizes.
Circlip - 31/10/2019
1: print plan
2: get ruler
3: measure thickness of items shown on plan (in fractions of an inch)
Daithi - 31/10/2019
Doh! material sizes ARE shown, Is it April yet??
Circlip - 01/11/2019
You are too materialistic, all of you. I meditate for a week and Buddha will show me all needed dimensions and thicknesses in dreams. If I meditate hard enough a heavenly drone will drop me a box with all the laser cut parts but in rosewood or teak. The Lord Buddha has never heard of balsa but I can use those for templates.
Miguel - 02/11/2019
Hi there, I saw Dave Platt fly the prototype at a rally in 1968 and was very impressed with its orange and green finish. When the kit came out I had to have one but my orange and green finish was not as good as the original’s, how could it be? It was my first semi aerobatic model and taught me a lot. 50 years on and firmly into the nostalgia game, I thought I’d have another go [main pic, 010]. Orange and green enamel out, Oracover in. With an Enya 35 plain bearing up front, bought new by me in 1973 and now in its second model, it flies beautifully and is now my go to model for aerobatic fun in my dotage. Will fit a pilot when I can find one suitable.
Roger Smith - 11/05/2021
Add a comment