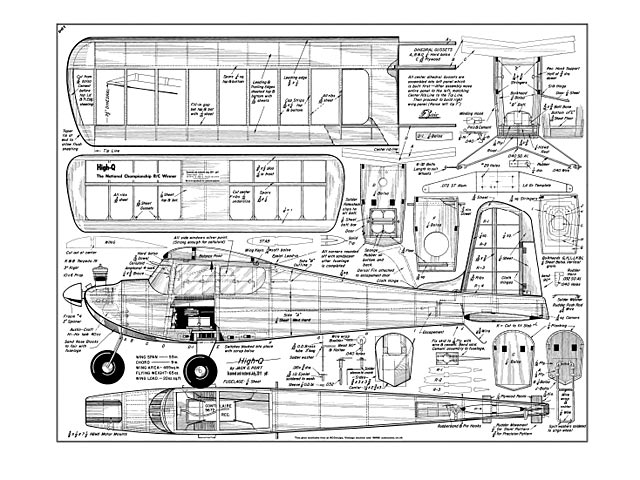 Published in AM 1954, this plan was also later reprinted in MB 1990. See supplement file for later MB article.

Quote: "The National Championship R/C Winner. What's needed in a model to win? One chap who knows: the Champ himself. High-Q, by Jack C Port.

High Q is not a completely new design, but rather my latest attempt to incorporate desirable features that would produce a better model for radio control contest work. Actually, the design is based on experience gained by flying other ships at contests and taking note of the scoring deficiencies present. Probably the most important factor in the design of a radio model is the type of basic control to be used. Because of past experience in flying and adjusting the basic escapement rudder control configuration, the design here was centered around the improvement in performance of this simple but effective method of control.

If we analyze the AMA radio control flight rules, combined with general contest conditions, certain ideas for development are evident. First, the model must be fully stuntable, yet adaptable to the type of weather conditions encountered.

As I have noted in the past, a lot of good models were at fault in the wind. Usually because of light wing loading and inadequate power the model, although capable of the stunt pattern, was prone to be lost downwind due to the lack of penetration. Actually penetration is the property of high air-speed combined with good longitudinal stability and the degree of its use is primarily controlled by power and wing loading factors.

If we attempt to increase the penetration factor in any given model of light wing loading (12 to 14 oz/sq ft), we must increase power, move CG aft, and reduce angular difference between wing and stabilizer. Usually before the desired airspeed is reached, a condition of longitudinal instability appears. Sometimes the model will tend to 'tuck-under,' especially if airspeed is increased more by a spiral dive in an attempt to begin a maneuver. This is basically a result of flying the wing at too low an angle of attack, which causes the center of pressure to move aft, creating a nose-down tendency. Also, due sometimes to poor wing structure, the increased airspeed will cause a certain flexing that lessens even more the angular attack, thereby exaggerating the tuck-under condition in model.

Although the tuck-under condition may not be to the point of complete danger, with respect to crashing the airplane, it will minimize the property of stunting the model. A nose-up tendency proportional to the increased airspeed is desirable in any rudder-only model. This is the basic element that allows a rudder-only ship to enter and complete a maneuver. Therefore, in the desire to increase the penetration factor, and still maintain good stunt quality, we must increase the wing loading and power, so the angular flight difference between the wing and stabilizer is greater.

Another factor equally important in obtaining good penetration, combined with stunting quality, is the selection of the proper wing and stabilizer airfoils. The flat-bottomed, medium-lift section is desirable for the wing, because it must be flown at higher airspeeds to create sufficient lift for the wing loading. Also, it is less prone to aft center of pressure travel when used at low angles of attack, thus minimizing the tuck-under condition..." 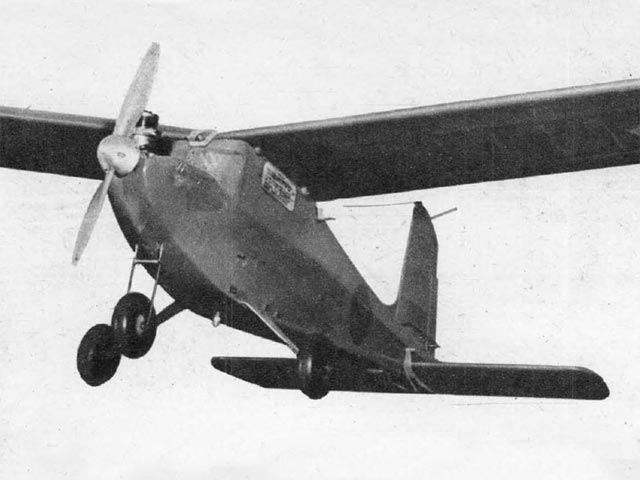