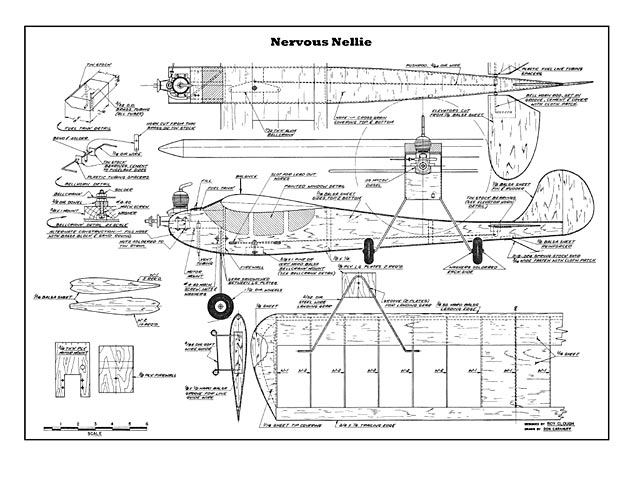 Quote: " If you think you are pretty good and want a ship that will leave the spectators weak and shaking, then Nervous Nellie is for you. Nellie doesn't look nervous. She looks like a gentle old goat with a strong blend of free fighter, but fire up the Mac diesel in her nose, turn her loose and you'll find yourself inventing stunts you'd never think possible.
Vertical, eights from take-off; triangular loops; somersaulting end over end in her own prop-wash, all come easily to Nellie. What's her secret? It's relatively simple. It's a gimmick known as a 'flying tail'. Consider the average elevator, hinged approximately in the middle; by bending it up or down we deflect the airstream and so move the nose of the model in a new direction. This works quite well, but bending a flat plate in the middle results in a sharply angular section which is highly productive of drag. Thus loss of flying speed occurs procedure as shown in picture of Nellie in flight to a greater or lesser degree in every maneuver due to elevator drag In addi- tion to that speed lost due to changing direction against inertial forces.
Nervous Nellie has a different type of elevator. This one is pivoted to ro- tate - it simply climbs or dives in the propeller wash according to the amount of deflection imposed. Control surface drag is reduced to a minimum and as a result the model whisks through maneuvers like a greased eel. Tighten up on any stunt and the model simply rotates around its center of lift. Loops of eight foot diameter are not only possible but practical - you have complete control right down to walking speed; just keep the lines tight and you can literally tumble the model end for end without losing control..." 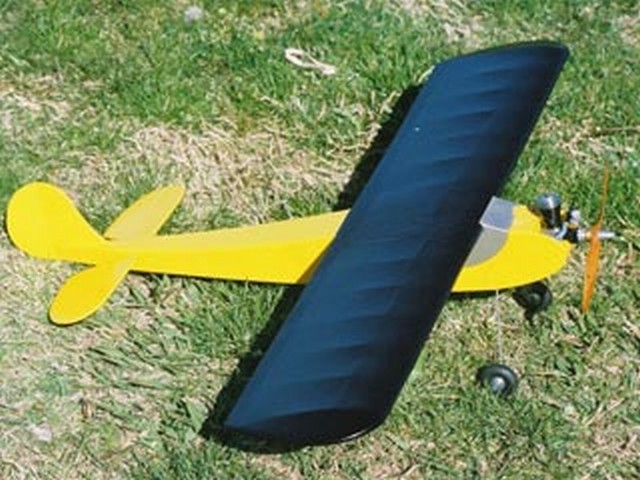