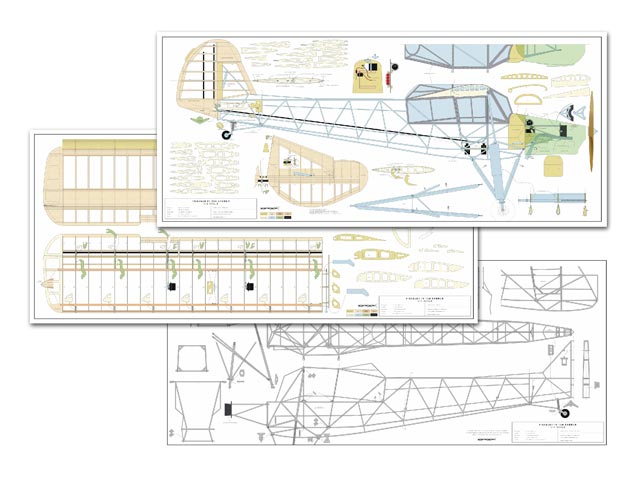 Note this plan is available as a free download from designer's own website at http://www.paoloseverin.it/Fieseler... along with a 14 page build article (in three languages) that explains the construction. Also there is a 48 page photo-album pdf download, too.

Quote: "I had heard many stories on the Fieseler Storch, but I had never seen one, other than in world war two old movies or in books and magazines.

Being a lover of slow flying, of the very slow landings, I got hooked by listening to the many legends about it and became for me imperative to build one.

I therefore started to get acquainted so as to have a good three views drawing, buying some from the www.bobsairdoc.com website, but among the three or four three view drawings that I received from the USA there were not two alike. I decided to stick to the most realistic one. Still on the internet on the site www.hinkleymall.com/storch.html, I purchased for $40 (you don’t go broke just gambling) a big book containing more than 200 copies of original drawings from the Fieseler factory.

Most of them were elevation views of as built details, not too useful for the project, even though interesting. However were included very precious drawings of the wing original airfoil, with the slats on the leading edge, the flaps and ailerons showing precisely the hinge points, in addition to the test results in the wind tunnel.

I had noticed some intriguing details of the fuselage steel structure which fascinated me. I then began to 'nurture' the project. I was pondering on how to solve this or that detail, trying always to find solutions that were as close as possible to the original one, but the picture that kept coming back to my mind was the steel structure of the fuselage. I started to evaluate if it was possible to build the fuselage like the one of the full scale airplane, some time before I had found small tubes in stainless steel in various diameter size , thick only 2,5 tens of millimiter. After some calculation i was amazed: a 1/4 scale fuselage over 2m long would have weighted a little over one and half kilogram. I could not believe it. I recalculate but the result was the same. So I said 'same as the full scale or nothing! and I decided to start. One hand on my heart and one on the wallet, I ordered over 40m of small tubes in different sizes,worth about Euro 300, from the company Castiglioni of Milano (see www.castiglioni-tubi.it) . The stuff arrived right before the Christmas holidays during which I started to work.

The project. After scanning the 3 view drawings I began to simulate various scales on the computer and i decided to go with 1/4 scale. The model that came out had a wingspan of 354cm, length 242 cm and 175 sq dm of wing area. A true beast! Just for precaution, before moving on, I measured out the car and calculated that by removing the stabilizer probably was going to fit..." 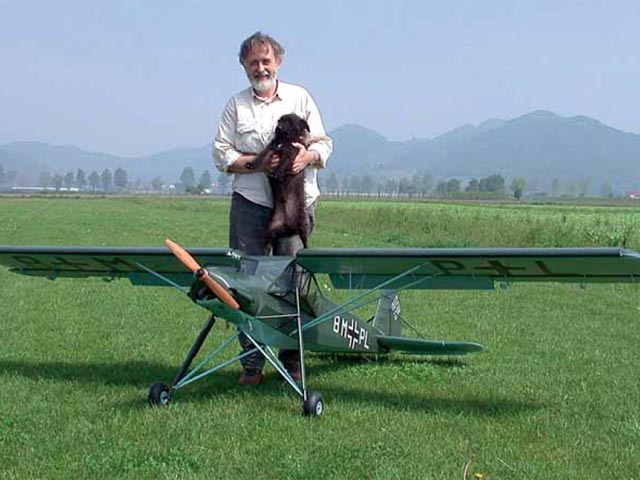 Have always LIKED this airplane and would love to build this model. It seems to lack any detail on fuselage formers, though, so it's hard to determine fuselage cross sections at various stations front to rear. Is there another plan sheet that's missing ? Any additional detail on a mechanism to open leading edge slats in concert with trailing edge flaps (maybe a cam arrangement to add slats at >20 degrees of trailing edge flaps) also would be useful/helpful. Or I could set up slats on a separate channel, perhaps. I would plan to make it a 6-channel R/C model - rudder, elevator, ailerons, engine speed, flaps/slats and lights. Many thanks for any added info.
GeoffSteele - 24/11/2018
If anyone can help Geoff, please chip in here via Comments. He's also happy to engage in direct email correspondence, so let me know if you want me to put you in touch.
Mary - 24/11/2018
Hi Geoff, I think you're putting the cart ahead of the horse as the Fi 156 slats were fixed. No extend/retract mechanism, just bolted in open position. Regarding fuselage formers, the original had none of these, the fuselage was welded metal tube - I'm not sure of the material right now - and Mr Severin followed the original.
Miguel - 26/11/2018
Yes, the fuselage is welded from stainless steel tubing, forming an exact scale replica of the full size machine. Without using any jig, or indeed any 1:1 drawings, according to the article. It's an incredibly skilful and complex build, using techniques that the rest of us would simply describe as magic. So...no, there are no formers. Although he does sell a complete kit, so there must be some way of replicating the build.
SteveWMD - 26/11/2018
I really appreciate the other comments and just want to add mine by saying that Paolo is probably the best combination of scientist and artist in the model aircraft field today, whom I'm aware of. Hopefully he's still alive, but if not then there are evidently others carrying on his work because his website contacts includes a laboratory in Italy plus dealers in America, Germany and Japan. Even his website is a scientific and artistic example for others to follow. It's dated 2008, but one of his models on this website is dated 2011, so maybe it's just an oversight. However, I just checked his blog on RCGroups and it says that he joined in 2008 and his last entry was also in 2011. Maybe he's just retired, rather than dead, because a web search of his name says nothing about his death, and check out the attached file. Anyway, whether he's still with us or not, his words at the top of the website are very encouraging to all of us who love scale model aircraft: In order to build a beautiful scale model, you only have to make the most faithful replica of the real plane.
GreggD - 29/12/2018
The magnificent coloured drawing of the full-size aircraft included in the article probably came originally from the reference to www.bobsairdoc.com [now known as http://airdoc.biz/]. However, it was probably enhanced by Paolo because it contains Italian text. On briefly perusing that website it's not easy to find, so if someone is any the wiser then please let me know.
GreggD - 29/12/2018
Is the body metal rods?
Pete - 10/01/2020
Yes. What a strange question, after reading this page, reading these comments, and looking at the photos.
SteveWMD - 10/01/2020
Add a comment