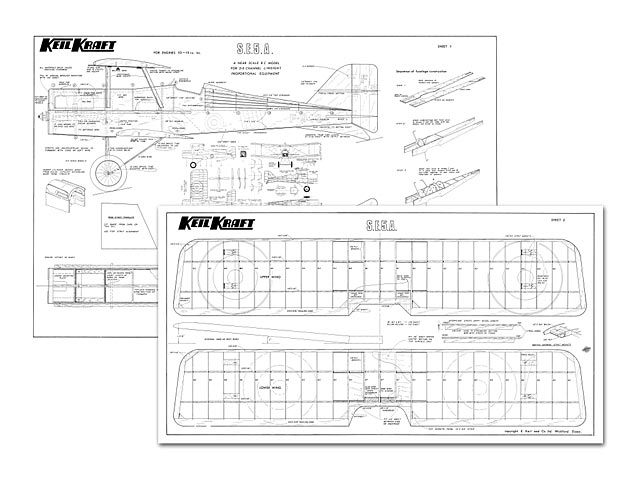 Quote: "Flown by Aces such as Ball, Mannock and McCudden, the SE 5A has carved itself a place in history as one of the finest fighting aircraft of World War I. The men and machines of the period were quite unique and represented a style of warfare that was completely different to anything else before or since. There is much value in preserving information on this subject and we hope that your model will enable you to recapture the excitement of the age of fighting biplanes.

Before you start building, read all the instructions carefully and study the plan to identify the parts of the model.

Commence with the fuselage construction:

1. Lay the two fuselage sides on the plan as shown in 'Step 1' and glue the front and rear ply doublers in place. Use an impact adhesive for this operation making sure that one right hand and one left hand side is built.

2. Carefully trasfer the positions for the spacers and formers from the plan and mark these on to the inside of the fuselage sides.

3. Trim the 3/8 square hardwood engine bearers to length and glue to ply doublers as shown in 'Step 1' on the plan. Use formers F3 and F5 to obtain correct position..."

Quote (from review): "There is plenty of room for up to three-channel equipment, and if the 4 oz tank supplied is used, I would certainly recommend having throttle control - but not at the expense of elevator. Routing of the push-rods is not shown but proved to be simple. Sufficient hardware is included for 3-channel operation, and the devises, horns and so on are ideal for the job.

My equipment slotted in, with three servos abreast, and the receiver behind the tank. A 225 nicad was taped to a ply plate and, in an effort to keep the CG well forward, the latter was screwed to wood blocks under the tank. In order to avoid having to remove the lower wing for battery charging, a remote charging socket is to be recommended.

The final all-up weight (with 4 oz noseweight and empty tank) came to 54 oz. This produced the relatively low wing loading of 14 oz/sq ft, so no problems were anticipated with flyability. The need for that lead in the nose was probably due to my extra coat of sealer, and since the instructions say that the elevator control is quite sensitive, it will pay to make sure that the CG on your model is no further back than shown!

Flying: My OS.15 had been installed with its silencer outlet joined by silicone tubing to a scale-length exhaust-pipe of 3/8 in dia aluminium tube, so a power loss was to be expected. The hardest part of pre-flight preparation was in selecting the propeller. There was no specific guidance in the instructions, except to select an experienced assistant. Well, I'm pretty experienced, but was still uncertain! I therefore tried three sizes, experimenting in the back garden: 8 x 6 nylon, 9 x 4 nylon and 10 x 3-1/2 TopFlite wood. The 10 in prop gave the best static thrust, and the 9 x 4 next best. The 8 x 6 was poor on the deck, but I felt could possibly be better in flight. I selected the 9 x 4, due to its better crash-resistance, for the first takeoff - and took off for the flying field.

This was the first SE5a to be seen in our area, so its arrival did not go unnoticed, and tanking up and starting was a warm operation because I was surrounded by on-lookers! There was very little wind and, on the first takeoff attempt, air-speed was not attained due to the drag on our grassy strip. Off with the 9 x 4 and on with the to 10 x 3-1/2. This time the acceleration was better but she still didn't quite make it before reaching the longer grass at the edge of the strip. Ah well, nothing left now but to give 'er a chuck. A willing helper was found who, with a gigantic heave, catapulted the SE into her element. Poetry in motion, it was - and the model looked good, as well!

No trim adjustments were necessary, the SE climbing steadily away with a nice air of realism. I experimented with the rudder control - it was quite a change to get back to rudder/elevator - and she handled like a well-bred trainer. Response to controls was smooth and pleasant; I had kept the throws fairly limited as recommended in the instructions. (In the absence of specific details, I used the outermost hole on the elevator horn, and ad-justed the rudder throw for lin. each side of centre).

After these intial experiments, I flew the model around, savouring the authentic vintage atmosphere it exuded. After about ten minutes (the 4 oz tank is good for twenty!) looped her, using a dive to build up speed. Next came a stall turn - ragged, but then, I wasn't used to her. Next a barrel roll - and phut! - the motor conked, so I glided her in. By keeping the nose down, I was able to maintain the good control response on the glide, and the landing would have been all right but for that long grass, which tipped her up.

For the next flight I disconnected the long exhaust pipe, but kept the 10 x 3-1/2 prop in place. She'd been so stable, right from the first launch that I did the honours myself this time, gripping the tranny in my left hand - smooth as silk again. The all-sheet fuselage gives confidence, and single-handed flying in rough pasture should be easily accomplished.

This second flight was every bit as enjoyable as the first, though removing the exhaust extension only improved power slightly. This time, spins were attempted - unsuccessfully - and the engine cut again during another barrel roll (perhaps a touch of pressure would help here). The landing was a picture - she trundled along for ten yards, once again up-ending on reaching the longer grass.

Summary: The KK SE5a is a lovely little plane and will rightfully become very popular. It is certainly not over-powered with the .15 and, I should think, would be on the marginal side with a .10 - and probably pleasantly lively with a 19. Further flights have verified her viceless nature and, provided one has passed the basic trainer stage, Keil's SE5a will give you many hours of pleasing, nostalgic, entertaining flying." 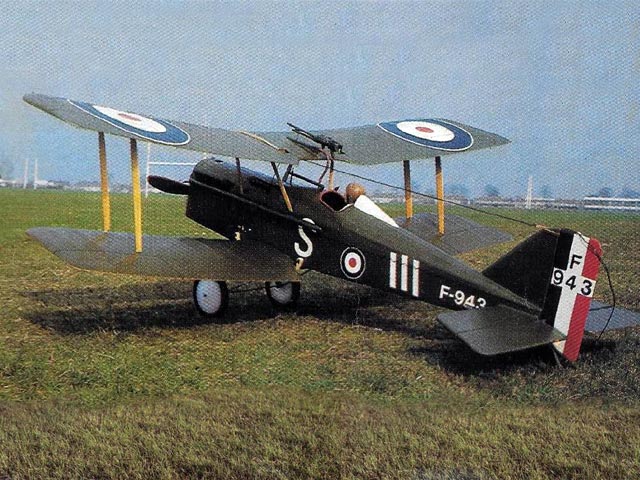