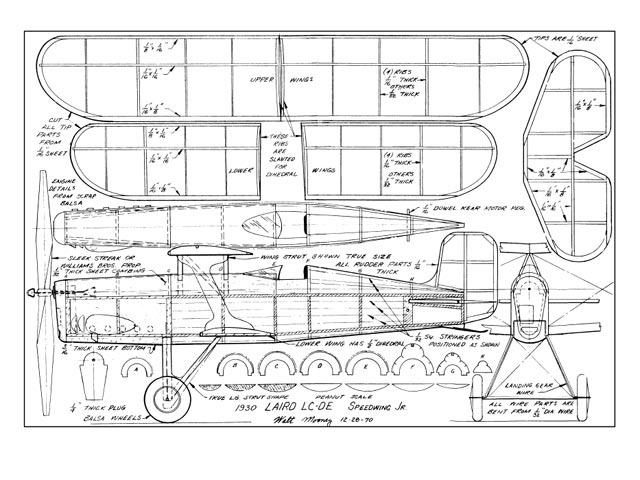 Laird LC-DE Speedwing. Peanut scale racer by Walt Mooney. This is the inline-engine version of the Laird.

Quote: "By Walt Mooney. Peanut scale of a little known biplane from the Giant's Hangar of the Golden Age of Air Racing, Long nose moment of the Laird LC-DC makes it an easy plane to balance, gives long motor run.

This is an extremely pretty little biplane racer. Its configuration is particularly suitable for a rubber powered scale model. The long nose and the long tail length make for an easily balanced and stable flyer. Three models of the Laird LC-DC were built and they have all proven to be nice flyers. All three models are capable of flights of more than 30 seconds.

The model construction is strictly conventional. As drawn it will not result in a particularly light weight Peanut Scale model, However, careful attention to wood weights and the use of slightly smaller wood sizes will result in an indoor type model capable of even better flight durations.

The real airplane had a lot of string-ers fairing out the fuselage. These are indicated as dash-dot-dash lines on the drawings. Omission of one or more of the side stringers in the interest of simplifying the model will hurt the overall appearance very little unless you worry about the last scale point in a contest. Flight wires can also be omitted in the interest of simplicity and less flight drag if desired.

For those who are interested in scale details and the utmost in judging points, good three-views of this airplane and other interesting racers are available from RS Hirsh, 8439 Dale Street, Buena Park, Calif 90620. Write for his

The model should balance about an eighth of an inch aft of the lower wing leading edge. No downthrust was required on the models built and the max-imum up elevator adjustment was used.

Since the model structure is strictly conventional; a box fuselage with formers and stringers, single spar wings, and sheet balsa surface tip outlines, only a few specific comments will be made.

First, the wheel diameter is rather large for a Peanut Scale so it is impor-tant to keep them light weight. Make them out of balsa or better yet mold them on a Vacu-form over a balsa or hardwood form. Second, the struts for the wing and landing gear will take quite a beating so..." 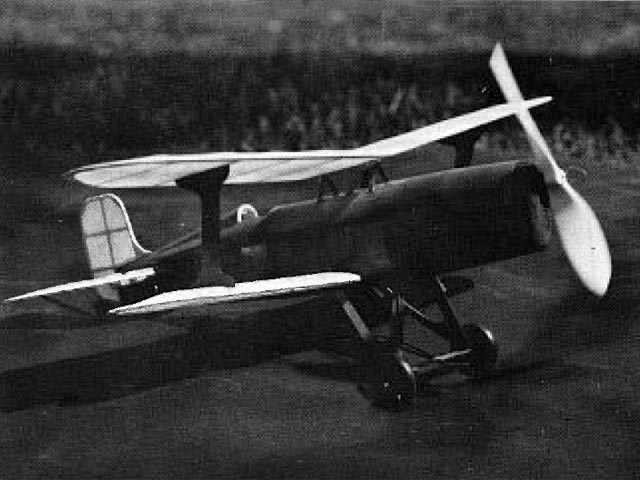