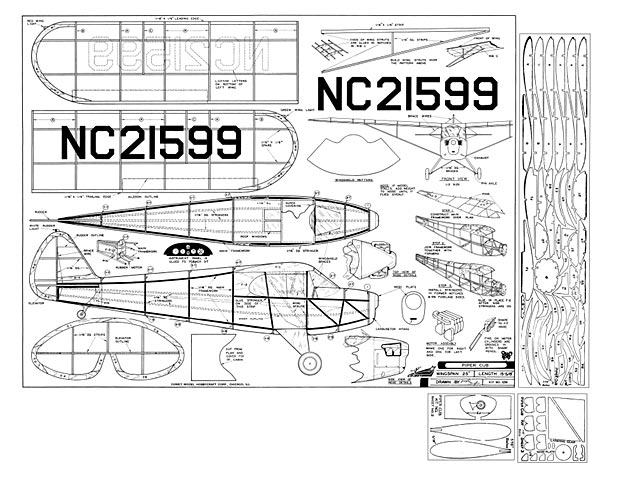 [Edit 24/05/2017: This scan is almost an exact duplicate (very minor differences, like added spats) of the Comet Piper Cub Coupe plan ref:E6 (oz6277) so I guess the title block has been edited later, in error. So most likely this is actually a Piper Cub Coupe plan from Comet (thanks Frank, Stuart), that has been later edited and titled incorrectly. Curious that the printwood all says 'Cub' and not 'Cub Coupe' on it though. Does the ref# 3206 mean anything useful? Ah, ok yes the Comet ref #3206 is for the "Piper Cub" kit, which has an illustration of a J-3 Cub on the box (?) ...so this plan scan here is deeply unreliable, on that basis.]

It is a Piper J-4 Coupe. Two place side by side trainer. note the doors, there was one on each side of the aircraft.
FrankAllen - 24/05/2017
"Piper Cub", Comet kit #3206: The uncertainty cited about this kit (is it a Piper J-3 Cub, or what is it?) likely has to do with the fact that the kit is simply titled "PIPER CUB", and then things grow foggy as the box art depicts the famous tandem-seat J-3 Cub but the plans depict a J-4, a relatively obscure 1938 side-by-seating evolution of the Cub design, and it was named the "Cub Coupe".
For this Comet kit #3206, prolific kit designer Joseph Konafes presents the J-4 Cub Coupe variant, but the kit name and the box art merely say 'Piper Cub".
So again, this kit is actually the J-4 Cub Coupe, a significantly different design from the tandem seat configuration of the classic J-3. In fact, the J-4 Cub Coupe was the first Piper design with side-by-side seating, likely done in direct response to the newly popular side-by-side designs by its chief competitors Taylorcraft and Aeronca.
Detail note: The J-4 Cub Coupe first appeared with exposed engine cylinders, and indeed this is the version depicted by Mr. Konafes in this nice vintage plan. Later versions had a fully enclosed engine.
John H. Rood, Jr. - 07/06/2020
It's a J-5
scotprin - 04/10/2020
I looked up the registration number (NC21599) on the FAA database. It's registered, and is listed as a 1938 Piper J4. I haven't been able to find any information as to whether that plane (c/n 4-400) left the factory with that registration or not.
There are deregistered aircraft records for this number also - one for a Cessna 172, and the others for the same Piper J4.
At any rate, the plan definitely looks like it's for a J4.
Roger Ritter - 08/07/2021
Roger Ritter, the Piper Cub club probably has records of all J4 coupes produced with registration numbers. It is not uncommon for someone to acquire a project airplane to restore that has been out of license long enough for the registration number to be reassigned to another airplane. The restorer will usually contact the current owner of the number and work a deal to transfer the number back to the aircraft being restored.
Douglas Babb - 13/08/2021
Add a comment