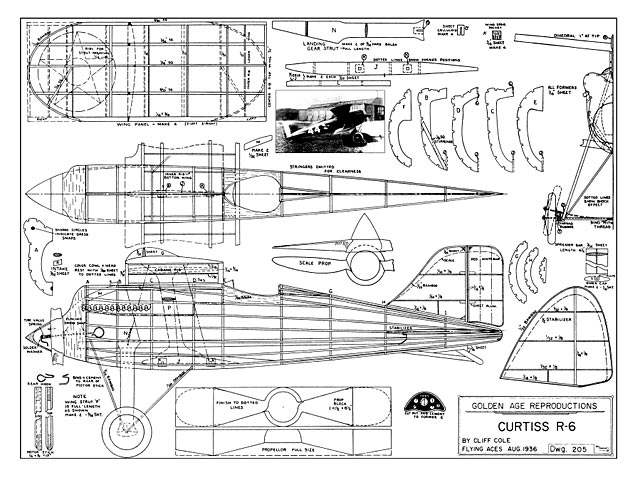 Quote: "THIS trim little speed ship was produced by the Curtiss Company in conjunction with the US military authorities in 1922. It was designated the Curtiss R-6 Racer. In this machine, wing radiators for racing purposes were used for the first time.

The radiators were fared into the wing beautifully. They eliminated the parasitic drag commonly caused by radiators of standard mounting.

This early plane had many other fine features that are still in common use on speed planes, namely, 'I' wing struts, single strut undercarriage, monocoque fuselage, etc. These refinements enabled this ship to walk away with the Pulitzer Trophy Race that year, at 206 mph - at that time a new world's record.

The long and illustrious line of Army and Navy Curtiss Hawks may be directly traced from the results of the research on this ship, their famous prototype. By carefully following the plans given here, a realistic, sturdy, and clean scale flying model may easily be made. (The scale is 1 in equals 1 ft).

This model will surprise and please you, with its powerful climb and speed enabled by the excellent streamlining that has been faithfully reproduced in the model.

FUSELAGE AND LANDING GEAR: Using the patterns given, cut all formers from 1/16 sheet balsa. Cement 1/8 sq stiffeners, as shown on front of former B. Next cut formers M, L, and J, from 1/32 sheet, making two of each. The fuselage is made in two halves, in the simple half-shell method of construction. After tracing a duplicate outline of the fuselage, so as to make a right and left side, we may start with the actual construction. Pin formers M, L, and J, on plans in proper positions. Next put 1/16 sq balsa strips on the outlines of the fuselage, from former F to tail of fuselage. Now cement all formers in their proper positions, making sure you have right and left sides for the fuselage.

After the cement has set, put a 1/16 sq stringer in center notches of formers, then continue applying 1/16 sq stringers until completed. You may now trim all stringers off flush with tip and nose of fuselage, and cement the two sides together, holding the sides together with rubber bands. Now fill in between formers E and F with 1/32 sheet balsa to form cockpit enclosure, and finish by cementing a piece of string around rim of cockpit, to form bead. Cut and apply 1/60 sheet balsa over cowl and head rest to dotted lines, then sand smooth.

We are now ready for the landing gear. Make two N struts of 3/32 hard sheet balsa, streamline and cement in place against back of former B, and to sides of former L. Spread to 4 inch tread. Next put finished spreader bar in place and cement. Assemble shock caps Y, on spreader bar, and cement celluloid guides 0, and place on struts. The axle is made of No. 14 piano wire and is bound to the center of the spreader bar with silk thread Wrap 1/32 thread rubber over axle between strut and shock cap, and tie. Place 2 hardwood wheels in place and cement washers on the end of the axle to hold them. Now brace struts with 1/20 bamboo, to formers A and D, as shown.

Cover fuselage, being sure to leave an opening for placing the lower wing in, using narrow strips of Superfine tissue to avoid wrinkles. You may now cement the celluloid windshield in place.

WINGS AND STRUTS Cut eighteen ribs of 1/32 sheet and five ribs of 1/16 sheet, to rib pattern. Pin 3/32 sq balsa to plan and assemble ribs and top spar, as designated. The leading edge is 3/32 sq and the trailing edge is 1/16 by 3/16. It will be noted that the only difference in the upper and lower wing construction is the center rib placing. Leave spars, leading and trailing edges 'projecting to center on the lower wing panels. The wing tips are of 1/20 bamboo, bent by flame and inset as shown. Assemble two halves of the top wing, giving it 1 in dihedral at each tip, and cement center rib in place..."

Article (includes original drawings as printed in the magazine). 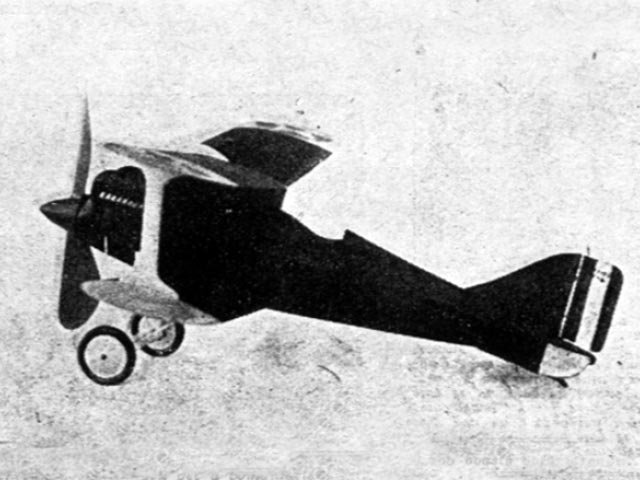