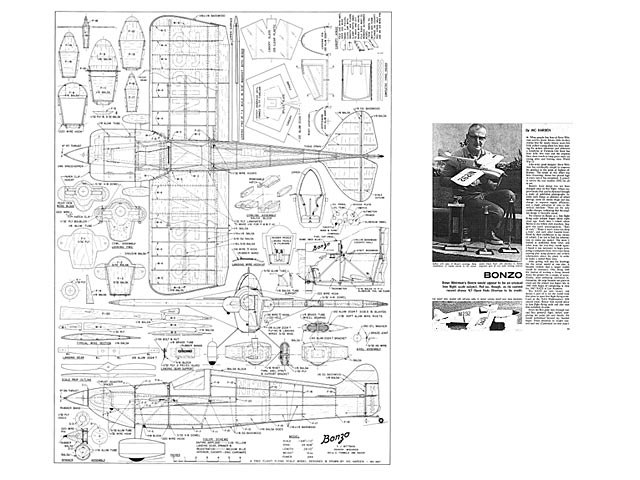 Quote: "Steve Whitman's Bonzo would appear to be an unusual free flight scale subject. Not so, though, as its contest record shows '67 Open Nats Champs to its credit.

When people first hear of Steve Wittman and his plane, Bonzo, little do they realize that for nearly twenty years this little yellow racing plane has been dusting the pylons whenever and wherever a Goodyear or Formula One Race has been held. The man and the airplane have done much to keep grass roots air racing alive and kicking since World War II.

Like every good designer, Steve Wittman has continually sought to improve his product to the point of highest efficiency. The result of this effort has been rewarding. Bonzo has placed high in every race it has completed. It proud-ly carries the race number ONE for all to see.

Bonzo's basic design has not been changed since its first flight. Minor improvements that can be detected through a study of published photographs include such things as addition of wheel fairings, some air intake shape and size change to improve engine efficiency, and a slight reduction of area in the vertical stabilizer. These are the only visible changes, indicating that the original design is basically sound.

My interest in Bonzo as a free flight flying scale subject began about eight years ago. Each time I talked about Bonzo to my fellow club members, they gave the usual encouragement; 'Rots of ruck', 'Hope it won't make too deep a hole', and such other hopeful hints. Fired by their confidence in my choice of subject, I set out to find the information to make my model.

The more I looked at published three views and other data, the less they would agree. I found it was necessary to begin compiling a composite three view from those existing plus using pictures and written information about the plane in order to make a useful three view. After getting well into the drawings for the actual model at one size, it became evident that alarger model would be necessary. This, along with the routine of earning a living slowed BONZO down the project for a couple of years. Finally, after collecting additional in-formation, the urge became too great to resist and the project was begun late in 1965 with hopes of completing in time for 1967 NATS at Los Alamitos.

From the first glide tests through taxi and first powered flight, before completing the paint job and details, the model performed beyond my fondest hopes..."

Update 03/10/2012: Replaced this plan with a clearer version, thanks to theshadow. 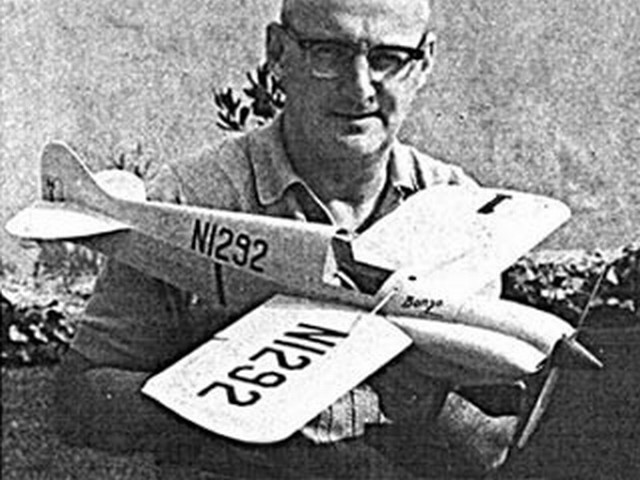