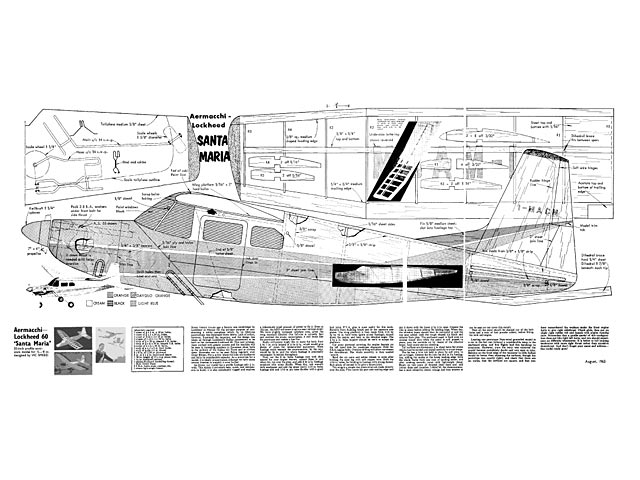 SOME THREE YEARS ago a factory was established by Lockheed in Mexico for the primary purpose of constructing a utility aeroplane which, by its Mexican associations, was christened Santa Maria. Lack of orders, however, frustrated the intention, and the design was taken up through Lockheed's Italian connections to be built as the Aermacchi-Lockheed 60. This new arrangement worked with greater success and the machine will be seen in increasing numbers in European skies, both in the uniform of the Italian Air Force and in civilian dress. Examples are to be seen flying regularly over Great Britain. For a utility plane the lines are handsome and belie its considerable capacity. As a prototype for a model, it is ideally proportioned, although we have taken certain liberties to simplify it even further.

As drawn, our model has a profile fuselage only 1/2 in wide. This makes it extremely easy, quick, and inexpensive to build; it is also remarkably rugged and requires a ridiculously small amount of power to fly it. Even at 10-1/2 oz, the AS55 will zoom it up in a near vertical climb! We have slightly increased tailplane area, given the wing standard dihedral (the full-size is virtually flat) and omitted the struts; nevertheless, it still looks like the prototype and makes a line flier.

Radio enthusiasts might like to make the body from 1/8 by 1 in strip instead of 1/8 by 3/8 in, which would give plenty of room for miniaturised equipment. Scale fuselage width beneath the centre-section, by the way, would be 3-1/2 in, and the whole fuselage is practically rectangular in section throughout.

First, cut the 3/8 in balsa fuselage core with slots spaced for your engine bearers, cement these in and when dry, lay over the plan, and add 3/8 by 1/8 in fuselage structure plus scrap blocks. When dry, rub smooth with sandpaper and add the upper (port) 1/16 balsa fuselage side and 1/16 ply nose doubler with a good butt joint. PVA glue is most useful for this work. Remove from building board and fit the opposite side plates. The wing platform is then made from 1/16 by 2-1/2 by 5-1/8 in hard balsa (grain across fuselage), scored down the centre, and bent to the dihedral angle. The by 3/8 by 1/8 in balsa support should be vee'd to accept the platform.

Cut away plywood covering the engine bearers on the left hand side for crankcase clearance. Drill for 5 BA engine bolts. Oversize drilling will allow movement for downthrust. The whole assembly is then sanded smooth.

Bend the uic units and solder wheels to axles after binding the nose leg with soft copper wire. Drill the 1/16 in holes, for binding to fuselage with strong thread. Rub plenty of cement in to give a secure joint.

The wing is a simple two piece structure made directly over the plan. First notch the port side trailing edge and pin it down with the lower 1/8 x 1/4 in spar. Cement the ribs in place before adding the leading edge. When dry, the dihedral brace should then be cemented in and the top spar added. Add the rough shaped tip block and remove from plan. The starboard panel is built over on reverse traced plan while the panel is still pinned in place, join the portside on by means of the dihedral brace..." 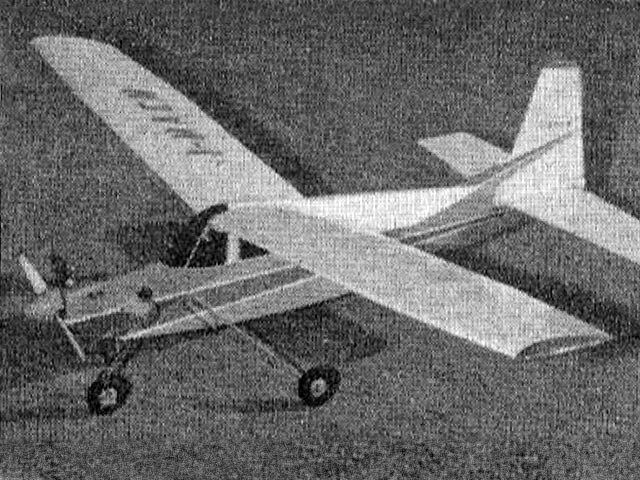