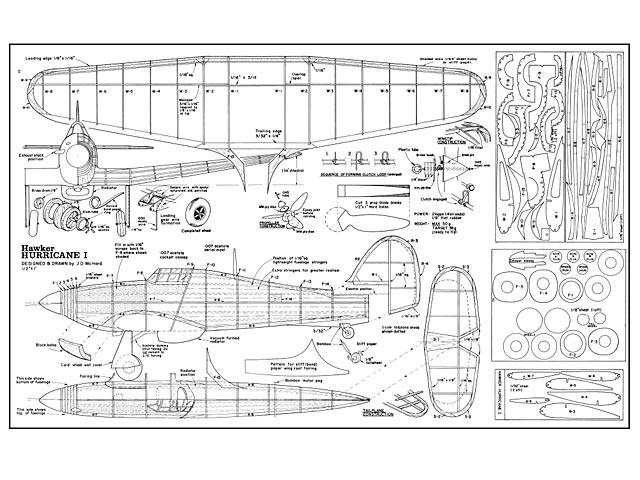 Hawker Hurricane. Rubber scale fighter. Scale is 1/24. This plan is from the book 'Flying Scale Models of WWII' from Model Builder magazine.

Quote: "Our model is based upon a machine belonging to No. 257 Sqdn, based at North Weald in Essex in 1940, and generally flown by Pilot Officer Pniak. An attempt has been made with this model to reproduce the bluff, rounded, multi-stringered appearance so characteristic of the Hurricane, but so rarely captured in miniature. In models of this kind it is of course impossible to reproduce accurately every external feature of the original machine. Ribs will invariably protrude on the wing and tailplane, wheel wells will be painted on, and propellers will most likely be oversize.

The difference between an 'average' model and a really good one frequently lies in the designer's ability to recognize the most important characteristics of the prototype and to reproduce them as closely as possible. If these key features are right, the rest of the model can often be simplified to its constructional and flying advantage.

It is my opinion that the Hurricane's personality has rarely been captured in small model form, and one reason for this is the difficulty of simulating the extra thick wing with its very blunt leading edge. Reduce this radius and you lose the Hurricane. The rear fuselage really needs all those stringers to achieve a convincing effect, and the wing root leading edge fairing is another elusive point of reference..."

Update 02/03/2015: Replaced this plan with a new version that fixes some distortion in the printwood formers, thanks to GuyColeman.

Quote: "Dear Steve, The formers F6 and F11 [also wing rib W2] on this plan have been distorted in the scan, and since they must be duplicated it will create a considerable discrepancy in fuselage width at the nose and mid-section. I have attached a 600dpi scan of all the parts so that you can repair the plan if you so wish. Kind regards,"

Update 30/06/2015: Replaced this plan with revised version (fin shape corrected) thanks to StuartBurling. 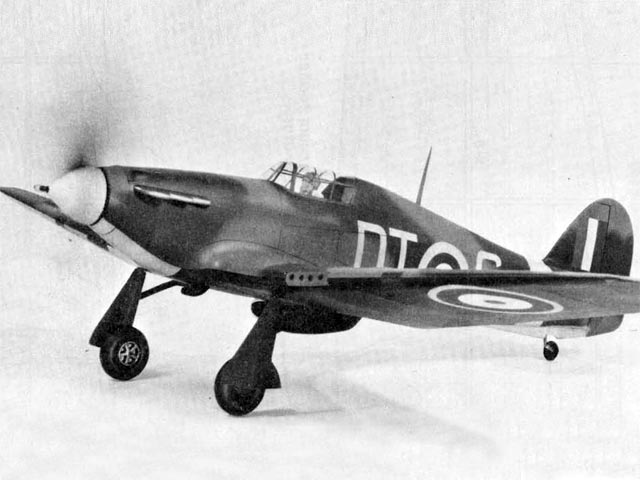 Hi Steve - a small but worthwhile correction to the above. The fin shape on Outerzone's Hurricane plan is somewhat distorted. You can see the difference in these two pictures (before and after) [see more pics 005] My corrected version of the plan is attached. (I used my own copy of the original publication to correct the Outerzone plan, but my work was made easy thanks to the original contributor who did all the difficult stuff, so credit for producing the plan should remain with him). Regards,
StuartBurling - 30/06/2015
Hi Steve. At 1/24th scale (as were all plans in this book), the Hurricane wingspan must be 20in not 21in. Regards,
HowardF - 18/05/2018
Thanks Howard. You're right of course. Let's call this one 20 inch.
SteveWMD - 18/05/2018
In my youth I built Doug McHard?s SE5a and spent ages studying his plan for the Gloster Gladiator, but I did not know of this Hurricane plan until I saw it on the wonderful Outerzone website. As with D. McH?s other plans it certainly looks right (unlike many Hurricane plans), he?s clearly shown where he?s slightly increased tail surfaces and the construction is carefully & cleverly worked out. I don?t know if I?ll ever get to build the model but I?d certainly love to and I?ve already had a lot of enjoyment from the plan! Many thanks.
Andrew - 27/08/2020
Hi there. Regarding the Doug McHard Hurricane design, here are a couple of pics [006, 007] of my completed attempt! Finished as an RAF 69 Squadron Luqua (Malta) 1941 version. Best Regards,
Nick Johnson - 20/10/2021
Looking good, Nick. PRU Blue and Rudder in Stone/Dk Earth, it appears. I hope it flies well!
Miguel - 21/10/2021
Add a comment