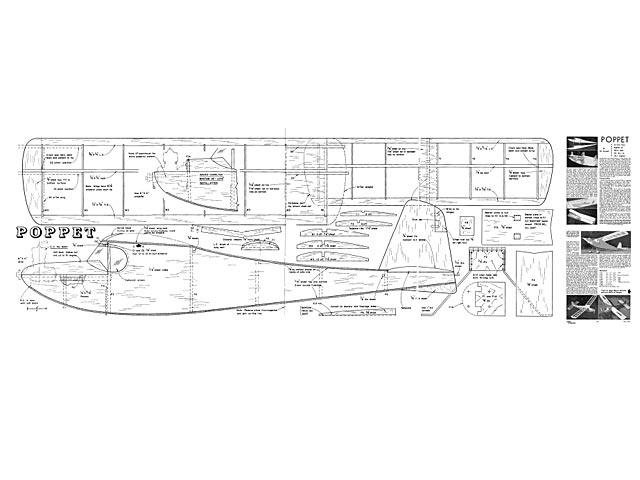 THERE IS NOTHING particularly new or unusual about this little model - it follows what might be termed traditional design layout, shape, and construction. What does put it in a class of its own is its performance, for its size. When we checked out the first prototype it was a frosty, absolutely windless day with bright sunshine and just a little haze in the sky - in other words, ideal conditions. Glide tests showed a smooth glide which, with a shim under the tail trailing edge, became a floating descent. Banging on hard right tab, we launched with the engine at reduced revs and the model turned tight right and flew into the long grass. With 'half' left tab and the same engine setting, we got 50 ft diameter circles to the left, without climbing.

Having thus established the turn characteristics in each direction, we set the tab about ten degrees right, adjusted the motor to maximum revs., and launched with what static ground tests (it was a new motor) had shown would be about a 15 sec. motor run. Forty-five seconds later we saw the motor cut, just; the model had climbed in one wide right circle and was a minute speck almost overhead, out of earshot, so that the only indication of engine cutting was a sudden change into about 50 ft glide circles.

Several minutes passed before we realised that it wasn't coming down, but drifting along in a weak thermal. We followed for about twenty minutes, towards the end catching only an occasional glint in the sun, until eventually we were forced to concede that it had gone - still at a dizzy height and flying well. The following day we learned that it had been seen to land on a golf course some 21 miles away just over an hour after launching.

A second model is now under way, mainly because it is hoped to make a radio conversion. This is not recom-mended except to reasonably experienced R/C fliers, and no details are therefore shown on the plan. In passing, we should perhaps point out that wing section and dihedral tend towards a compromise for R/C use, and if you are building the model purely for free flight, make sure you do not have less dihedral than shown; a little more makes no odds.

Construction. Decide first what motor is to be installed, i.e. whether beam or radial mount is required. A wide range of motors are suitable, from the Pee Wee .010 or .020 - which would probably call for ballast in the nose - to any of the standard .049 or .8cc engines. The prototype used an E.D. Baby .46cc and flew very happily at an all-up weight of 6-1/4oz.

Select stiff but light 1/16in sheet for the fuselage sides, trace and cut out and sand to ensure that both sides are identical. Cut bulkheads, bend undercarriage (this is 'flat' to make accurate bending and axle line-up easier) and bind to F2 as shown. Small nicks in the sides of F2 will allow the thread to sit flush. Now cement F2 to F3 thoroughly, and allow to dry under a weight..." 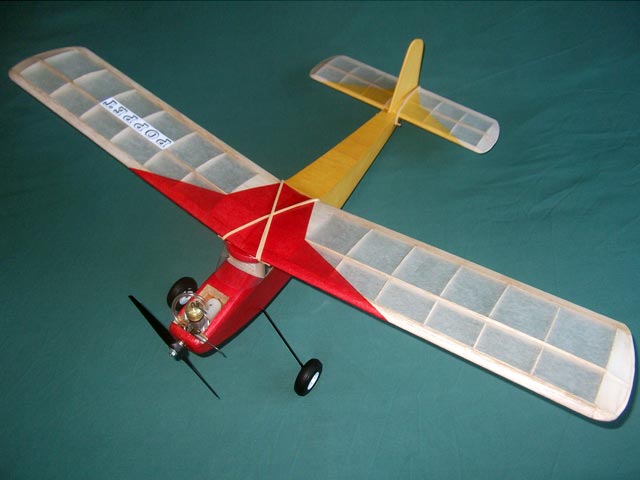 Colour photo of the Poppet [more pics 007] is thanks to JohnSanderson.
SteveWMD - 18/10/2012
Hi Mary and Steve, please find attached a couple of photos of my Poppet [more pics 003-006]. I built it as a test to see whether adding a few 1/8 sq balsa cross-braces would increase the wing's rigidity, as I wanted to cover the model with plastic film, that does not give the structure the torsional rigidity given by doped tissue. The cross-bracing was successful, for a negligible weight increase. Powered by a .049 Babe Bee I only flew it in this configuration a few times, as I hated the idea of losing the model from an engine over-run! And yes, I did try measuring the fuel I injected on the integral tank ... A couple of years later, I converted it to single channel RC, using some quite unsuitable equipment! It was in the 1980s and the then-current 'micro' Cannon systems were totally out of reach financially-wise, as I was just a student! In that guise it was reasonably successful, as at least I had a 'fighting chance' of preventing it flying away! The model still exists, so I am toying with the idea of recuperating it, this time using electric power and mini RC gear - 'mini' gear that, as old hands know, is *smaller and lighter* than what passed as 'micro-gear' in Cannon's heyday! Best regards,
ArnaldoCorreia - 22/03/2017
Here's a couple of pictures of my 'Poppet', built during the 2020 lockdown [main pic, 009]. Made more or less totally from scrap (apart from the fuselage sides), this super-simple design will be a certain flier - whenever that might be! The colour-scheme is my variation on Vic's original and a late Goldhead 'Dart' provides the power. The model was featured again more recently in the December 2017 'Aeromodeller' and included the full-size plan.
Richard Scott - 19/05/2020
Add a comment