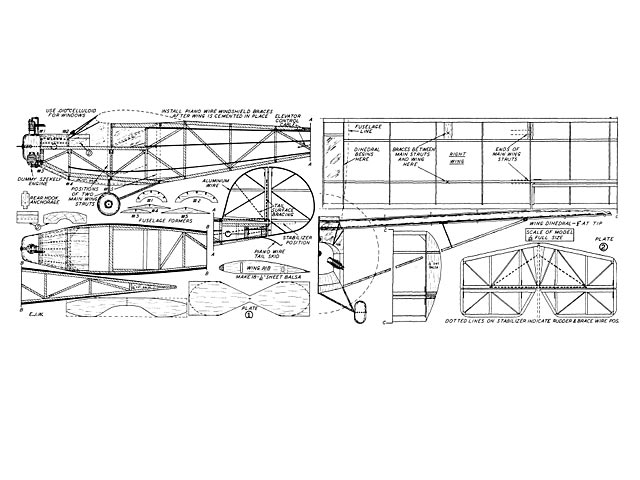 Quote: "Build this flying scale model which has the proportions to make it a real performer .

HERE is a well designed pre-war American lightplane that lends itself admirably to model building. It was in the same category as the 40 hp Piper Cub, being of the same general dimensions and performance. The Flyabout had ample room for two people and a puppy - so stated Aircraft Mechanics, the manufacturer. Two powerplants were available: the Continental A40 of 38 hp, and the Szekely of 45 hp, as reproduced on this model.

The scale of the model is 1/20 full size. All balsa used should be of firm texture unless otherwise specified.

Fuselage. Begin by making the two side frames (shaded on drawing). Use 1/16 sq and 1/16 x 3/32for these. 1/16 x 1/8 stock is required for front portion of the lower longerons. Assemble the two frames in the usual way, first installing the cross-braces under the wing position. Notice that a few of the upper crossbraces, of 1/8 sq. balsa (between nose and rear of cabin), are set low to allow passage of the rubber motor.

When the fuselage frame is completed to this point, cut out the required formers from 1/32 sheet balsa. Cement each in their re-spective positions. The 1/32 x 1/16 stringers should now be put in the nose as well as the single stringer which runs along the cen-ter on the bottom. Cover these areas with 1/64 sheet balsa, using three separate pieces in covering the bottom as shown.

After cutting the rear rubber hook bulkhead to shape, bend the rear rubber motor hook from No. 15 piano wire and insert in the bulkhead, following with the placing of the unit in the fuselage frame at rear as shown. The nose block, of medium-hard balsa, is made next..."

Thanks to Pit for more detail on this plan, quote: - "from Model Airplane News April 1947. From ELBERT J. (JOE) WEATHERS (1920-1984) Alexander Aircraft Company, succeded in Aircraft Mechanics, Inc. This model is known as Alexander D-2 Flyabout with 3 cyl. Szekely engine." 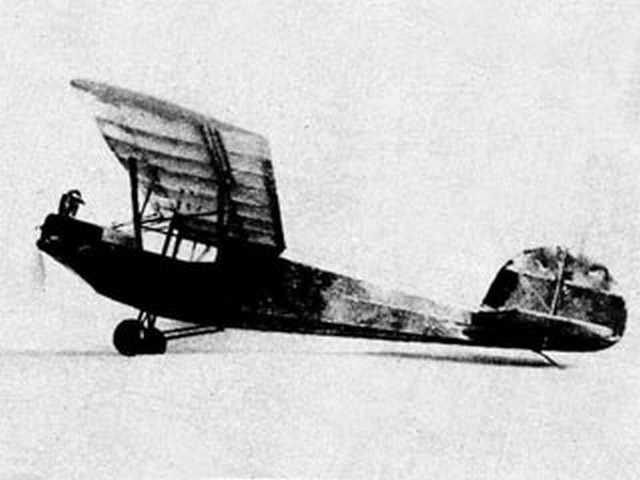