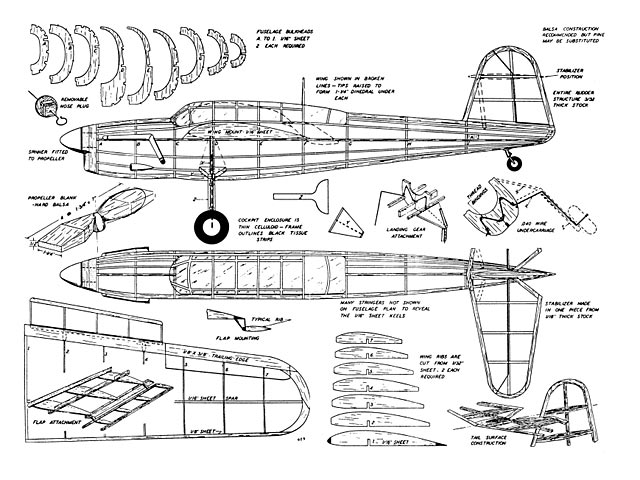 IN A dramatic carrier launched assault early last spring, the Fairey Barracuda was introduced to the Nazis. Sweeping over Alten Fjord, Norway, at the very moment when the capital battlewagon Tirpitz was about to leave her anchorage to steam away, forty-two Barracudas scored twenty-four direct hits, delivering the knockout blow to keep her down for the count.

Built to most difficult specifications of the Fleet Air Arm, the Barracuda is said to be equally suited for dive, torpedo and precision bombing. As such it carries a torpedo, bombs or a mine, and contains a full set of navigational equipment as well as defensive armament. For offensive and defensive reasons it was conceived to be reasonably fast, but at the same time takeoff run and landing speed were kept at a minimum because of carrier operations. That the craft is capable of performing its duties is reflected in the large number of Barracudas that have been delivered to the Royal Navy.

External observation of the ship reveals a number of unusual features. Readily apparent are the large novel flaps which hang below the wing trailing edge. These pivot about their lateral axis and are set level for cruising, lowered slightly for takeoff, fully depressed for landing and set negatively for dive bombing. Outstanding virtue of this type flap is that it does not alter the trim of the airplane.

However, when the flaps are set at a negative angle for braking, the flow of air towards the tail is greatly disturbed. This unquestionably dictated the high-set, strutted tail plane, for it is mounted Westland Whirlwind fashion almost at the top of the fin.

Other noteworthy features are the unique retractable undercarriage and folding wings. The problem of stowing the landing gear on a high wing ship is nicely solved by placing the unit pivot at the junction to the fuselage. In this manner the wheels arc into wells in the wing where they are stowed without a break in the airfoil's contour. Likewise, ingenuity is reflected in the manner in which the wings are folded. First, the whole trailing edge, flap included, lifts up to rest upside down on the wings' top surface, Then the wings fold back where they are secured near the tail. This collapsibility enables the craft to be stored below decks.

Because of the plane's interesting design, it makes an attractive, practical flying model. Very little deviation from scale was required to adapt the craft for a model of simple construction and maximum flight capabilities.

Plans are full scale and the following brief description outlines the manner of construction. It is suggested that the various parts be assembled right over them for greater accuracy and simplicity.

Since balsa wood is available to most builders, it is recommended for use in this project; however, in the event that white pine or spruce must be substituted, it will not handicap the model's flying efficiency too much. Simply reduce the cross-section sizes of the parts a bit and the weight and strength will remain about the same. Colorless, quick drying cement is used for adhesive regardless of what type wood is employed.

Construction of the fuselage is a good start for the project, and since bulkheads and keels are used, it is easy to make a neat, accurate job. Cut the bulkheads and four keels (top, bottom and two sides) from hard 1/16 sheet; only those notches indicated are cut out of the bulkheads, others being marked to be cut later. To assemble these parts, first pin the top and bottom keels in place over the top view, then fit bulkhead halves in place and attach the side keel. Once this structure is dry, remove It from the jig and add the remaining bulkheads and keel. Stringers are 1/16 sq stock. Attach those closest to the side keels first, cutting the notches as the work proceeds. By placing stringers in similar positions on each side at the same time, the frame will not become disaligned.

Several other items are now added to the fuselage structure. The nose block is shaped from laminations of 1/4 sheet and the center is cut out to receive the nose plug. A removable bamboo pin holds the rubber motor in the rear and this pin is cradled by small sections of very hard balsa cemented between the stringers as shown. Rib-like formers to which the wing panels are butted are cut from hard 1/16 sheet and they must be ce­mented to the bulkheads and side keels at the exact position shown.

Details of the landing gear are shown on the plan and it will be found that this undercarriage is both practical and easy to make. Music wire, .040 diam., is bent as indicated and then secured to bulkhead 'D' by thread which is sewed right through the wood and about the wire. Thread wrappings and the adjacent structure are thoroughly covered with cement for greater strength. External appearance details of the landing gear are added later.

Because the horizontal stabilizer is mounted on the rudder, the latter must be made extremely accurate and strong. Work right over the plan and assemble the rudder from 3/32 thick stock of the width shown (outlines are of odd widths, so simply cut them from sheet stock). Ribs are streamline in cross section and this is achieved by cementing 1/16 x 3/32 strips to each side of each rib. These are later cut to the streamline shape shown by the perspective. The stabilizer is one piece and constructed in a similar manner, only difference being that 1/16 material is used throughout.

Only the left wing plan is shown because of limited space. Ribs, with the exception of No.1, are 1/32 sheet; two of each are required. Likewise spars and leading edges are cut from sheet stock. Since they are tapered, depth of each is determined by the size of notches in the ribs. Tips are cut from 1/8 sheet. Assemble parts over the plans, using pins to hold them in place until the cement hardens..." 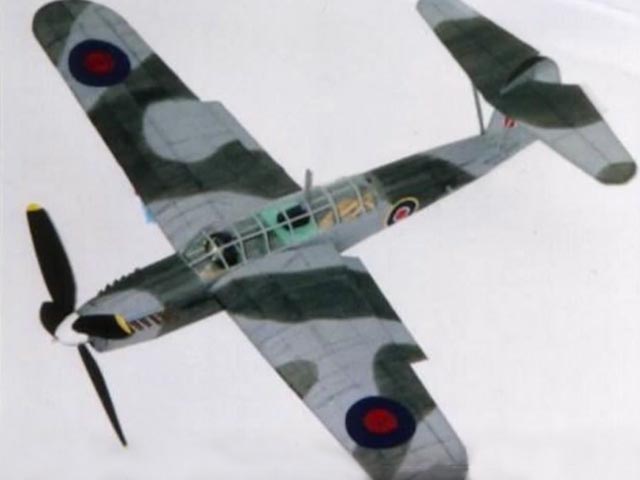