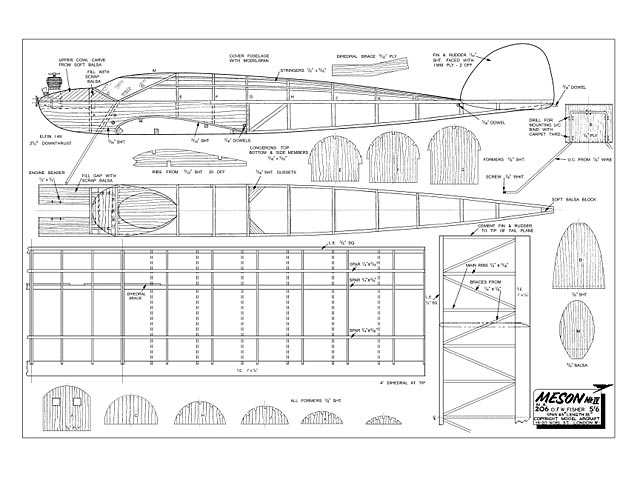 The Meson Mk.IV is the latest of a series of low wing monoplanes, most of which were fitted with radio control. In its original form the Mk. IV was powered by the Allbon Javelin 1.49 cc but it has also been flown with equal success when powered by other similar capacity engines, including the new ball bearing Elfin 1.49cc.

Contruction is quite straightforward and combines simplicity with strength.

Fuselage. Cut the 3/16 in sheet side formers to shape and build the fuselage side from 3/16 sq balsa directly over the plan. The second side should then be built up superimposed on the first. Now mark the positions or formers E, F and G on the inner surfaces of the side-formers, and then cement the formers at right angles to one side, using a set square or postcard..."

Update 02/02/2016: replaced this plan with a clearer copy (patterned background removed) thanks to TonyP.

Note colour photos of Meson model are from RCME, 2004. 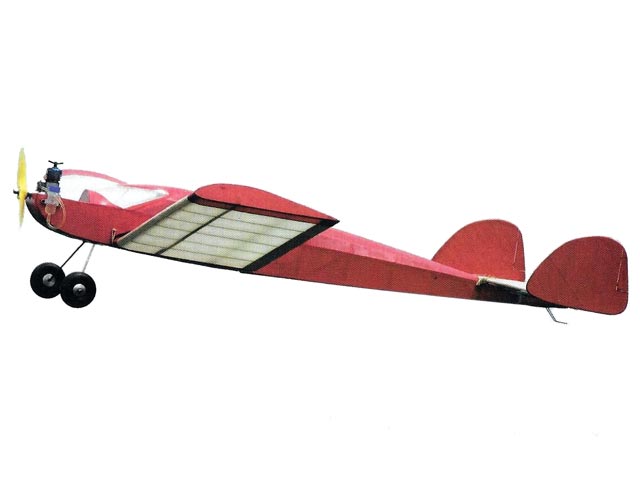 I discovered a nice video of the Meson MkIV flying at 10:45 here: www.youtube.com Anyone sceptical about the stability of low wing free flight models should take a look at how well this one flies !!!
ChrisPinn - 22/02/2016
Hi, in the picture you have of a young lad with his red & white Meson is my son Andy, he’d have been aged about 13 then. He still has the Meson.
I stumbled upon this by chance, I’ve sent him a screenshot and he looks forward to his royalties!
Regards,
Charlie
Charlie Jeffreys - 05/11/2019
Add a comment