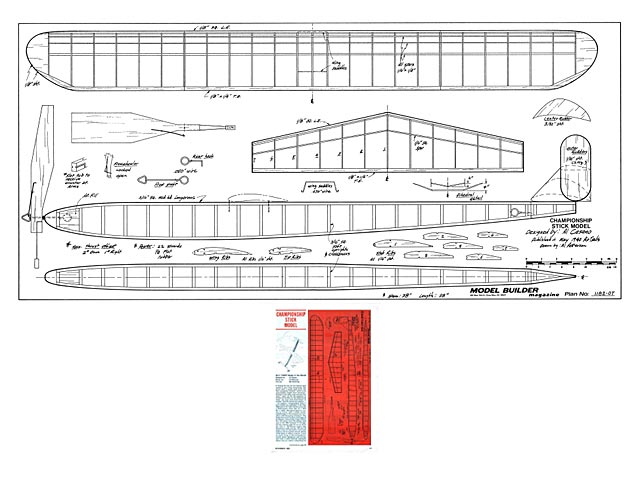 Writing the text for this feature each month is very time consuming. The article itself is usually quite short. The time consumed, however, seems to be unavoidably longer than necessary. Writing it only takes a few minutes, but when I open up the old magazine to refresh my memory on the featured old timer, my eyes and mind begin to wander. Take this month, for instance.

Al Casano's Championship Class C Stick Model was published in the May 1940 issue of Air Trails. On the cover was a three-quarter front view of a TWA DC-3, highly silhouetted against a sun-rise or sunset, with a single round-roofed hangar in the background, com-plete with drooping windsock. The inside front cover contains a full-page ad by Megow, announcing a huge contest. First two places were all-expense paid trips to the 1940 Nationals in Chicago. On the contents page (4) was an ad for the Class A .199 Bantam engine, Ben Shereshaw's pride and joy. The next 20 pages were all devoted to full-scale aviation; ads for aviation schools, photos of the latest in military aviation, a story on early flying in the stratosphere, articles about lightplanes and soaring, and even a short fictional adventure about two air cadets competing for

assignment to a highly rated fighter squadron. The model section started on page 25, with an inside cover photo and head-lines for key articles. First there was the 'Thermaleer' by Dan Veronica, a beautiful, streamlined Class C gas model with a span of 76 inches. Full-size ribs for the Chester "Jeep"-style tapered wing, and full-size bulkheads, help in enlarging the plans for construction. In fact, it's so pretty, we'll have to do it some day soon for Model Builder.

Next was Model Matters, featuring The Dope Can (it really didn't mean anything else in those days) by Gordon Light. Then came an article on prop fittings by Dick Korda, top rubber modeler of the day.

Our OT Model of the Month appeared next. If you remember Al Casano's designs, you'd probably agree they were functional, but not always pretty. The sometimes angular outlines cut into what would ordinarily constitute the esthetic beauty of many other designs of the time. In my opinion, however, this stick model was simple, clean, func-tional, and had a 'just right' look about it. Being chicken about heavy rubber motors, I really liked the 3/16 square fuselage construction!

On the next page, Herb Weiss pre-sented an article on model helicopters, 'Ceiling Walker' style, but more exotic. Following three-views of a Douglas DB-7 for France came Part II of Henry Struck's 'New Ruler' article (now you know how I found Casano's Stick model - wandering through the mag when writing about the New Ruler!)

After another three-view and a brief article on building a Stinson 105 solid model (you know what a solid model is, don't you? Even plastic models aren't solidi!) We come to the model ads that make old timer addicts drool; kits for a few bucks, all kinds of juicy ignition engines - how about an OK Twin 1.2 cu in displacement for $35.00 the Atom for $12.95, Miniature Aircraft Corp scale kits, Midwest's 'Jabberwock' for $1.00 postpaid, and so on. See?! An hour-and-a-half shot already on only 66 pages, and I've been through the magazine hundreds of times since I picked it up 42 years ago."

Update 06/11/2012: Replaced this plan with a clearer version from MB courtesy of theshadow.

Article.
Scan of the original drawing as it appeared on the magazine page. Unscaled. Thanks to 50+AirYears. 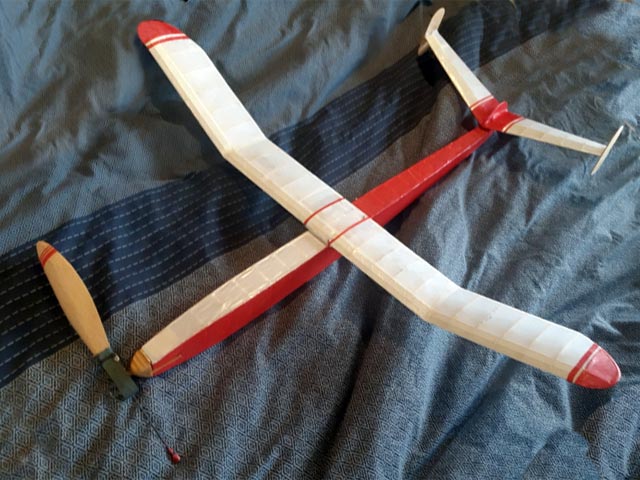