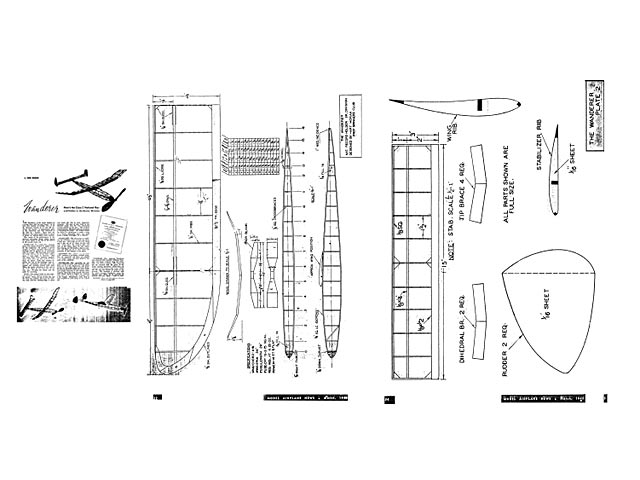 Update 01/06/2012: Thanks to David Wagner for the submitted pic of his Wanderer model, built from this plan [see more pics] - very nice work. Beautiful.

Note this is the Wanderer plan as it appeared when first published in MAN 1945. For a later redrawn version of this plan at full size, see Wanderer (oz9147).

Quote: "THE Wanderer, as its name implies, is a model that will not stay home. In its very first contest at Linden NJ, it set the National Record of 13 min 48 sec which still stands. It disappeared early in the afternoon and was returned to the field by a farmer. Since then the Wanderer has taken more than its share of prizes in various East coast contests.

The secret of its performance is the inherent skyrocket climb, which leaves it a small speck in the sky at the end of its 26-second motor run.

FUSELAGE: To build , the fuselage select four pieces of hard 1/8 square balsa for the tongerons. Be careful to secure lengths of equal strength otherwise the fuselage will be pulled out of symmetry after it is made. The first step is to make two sides, one on top of the other with a piece of wax paper in between. This will keep them from sticking together.

After both sides are dry, remove them from the plans. Trim and cement together the rear of the fuselage; next insert the crossbraces starting with the largest and working toward both ends. When the entire structure is dry, put in the 1/16 sheet at the nose and at the rear peg. Re-glue all joints and lay aside for covering.

WING: The wing is built in four separate sections: two tip panels and two center panels. First, cut out all the ribs and the wing tip outlines; then put the trailing edge and the leading edge in place and insert the ribs in their respective positions. The spar is then built to the dihedral angle, and the four completed sections placed on the spar. This method installs proper dihedral without cracking or breaking the joints. The author thinks the above is a good way to make a wing in a hurry, especially when you must build a model overnight for a contest.

STABILIZER: The first step in building the stabilizer is to enlarge the plans to full size. Cut 9 ribs out of 1/16 sheet and 2 ribs out of 1/8 sheet for the end ribs. Next place the trailing edge and spar on the plans, place the ribs where they belong, put the leading edge in position, and glue up all at once while the assembly is still pinned to the plans.

RUDDERS: The rudders are cut from 1/16 medium sheet balsa, vertical grain. Two are required, and these are sanded to an airfoil shape and then glued to the ends of the stabilizer.

PROPELLER: The propeller is cut from a 12-1/2 x 2 x 1-1/4 inch soft block of balsa. First cut it to the dimensions and shape shown on the plans, then carve it down. Be sure to get both blades the same shape and weight otherwise it will vibrate when rotating. Sand the prop smooth and cover with tissue which is doped on. This is important as it makes the propeller last a lot longer. Remember, your ship is only as good as your prop, so do a good job.

FLYING: First test the balance of your model by gliding it from shoulder level. If it dives, move the wing forward; if it stalls, move the wing back; however don't move it more than 1-1/2 in either way. If the model stalls or dives past those limits, add positive or negative incidence as needed. The original required 1/8 in positive incidence to obtain a good glide. When the glide is satisfactory, give the motor a 100 winds, and adjust for a right spiral climb and a tight left circle in the glide. When the climb and glide is 'on the ball,' wind her up full and start running in pursuit of your Wanderer!" 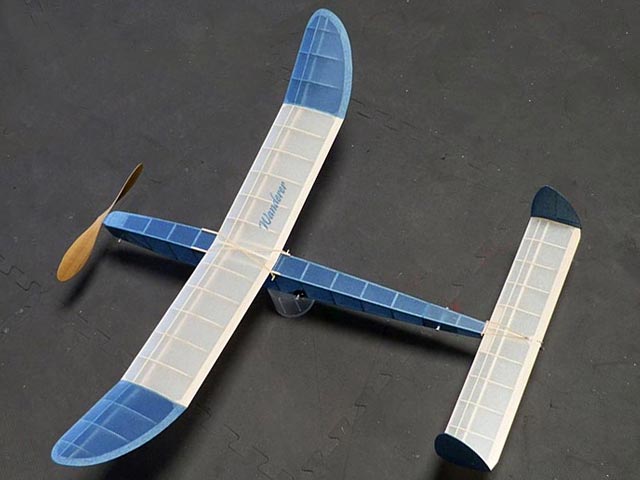