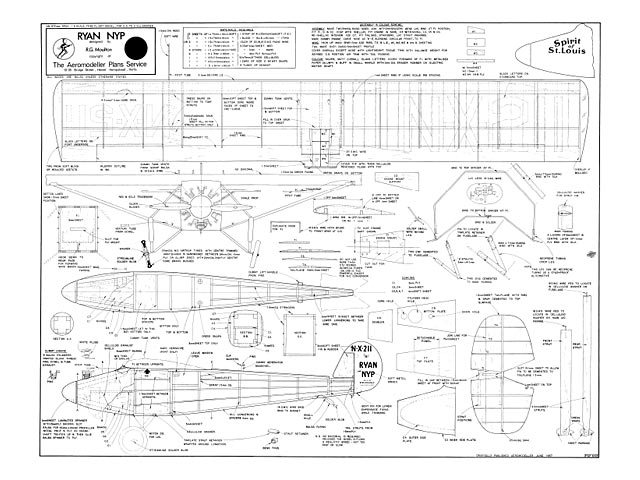 Impossible, stated the critics. Nevertheless we always did like tackling something really difficult and even if the Ryan NYP did show an alarming lack of dihedral and paltry tail surfaces, it did at least boast a nice simple fuselage construction and, believe it or not, Clark Y airfoil section on the full size. Such a flying scale subject is the type of challenge which makes aeromodelling all the more interesting. The 'Spirit' has always been a modellers' subject in the USA, but oh! how it has been divested of its true characteristic flat wing and stringered fuselage in so many cases!

To satisfy ourselves that a model could be made free flight, to exact scale, apart from the zero wing incidence of the full size, plans were drawn up more than a year ago and three prototypes made by independent modellers. The dihedral problem was considered seriously and as originally designed, the model had the spacing between the wing struts filled-in with a celluloid plate to provide sesqui-plane effect. This point has been eliminated from the drawing.

Flt./Sgt. Bob Collington at RAF Hemswell was the first to get one of the prototypes airborne and he tried it straightaway without the celluloid strut filler. Low power, with a prolonged glide seemed satisfactory so he increased the revs on the Dart driving a Truflex 6 x 4, and to use his own words, 'The stability of the model in the air gave the impression that it was held horizontally by a pair of invisible hands on the wing tips' - so much then for our concern over the dihedral!

First power flights have, in all cases, been practically dead straight runs. To obtain a nice climbing turn, Bob Collington found he could deflect the rudder as much as 20 degrees - which just shows how insensitive those diminutive scale surfaces are, and how this design serves to contradict the expectations of the Pundits. Best flight pattern is wide left hand climb, turning to the right on the glide, using slight right rudder.

So much for flight performance. As for the construction, the model is little more than a square box fuselage with a slab of wing superimposed and solid sheet tail surfaces. Anyone with experience will find it a simpleton to make except, perhaps, if you want to make it absolutely dead scale with true rib spacing when you find yourself with forty-eight 1/32 ribs to cut.

The most difficult part of the model is the dummy engine, but if treated carefully, it is remarkable how one can reproduce nine balsa cylinders with thread tins wound around a carved balsa dowel, and odd pieces of reed used for the curling exhausts, with pins for push rod covers, etc.

The strutting is rather involved, but the method of retention permits easier assembly and a minimum risk of damage in the event of a hard landing. One should remember that the wings do not have to be supported by the struts which are purely ornamental and the wing is in fact, retained by connecting it with tight elastic hands from the wing hook to the inside fuselage hook on F1. Then slide it forward so that the Newey dress snaps on the trailing edge pop into place to lock the wing and retain the incidence.

Leave the tail surfaces loose, held on by elastic bands until you have sorted out a flight trim, then cement firmly into place with tail struts added for scale..."

Update 26/10/2018: Replaced this plan with a (massively) clearer copy thanks to DBHL, theshadow. 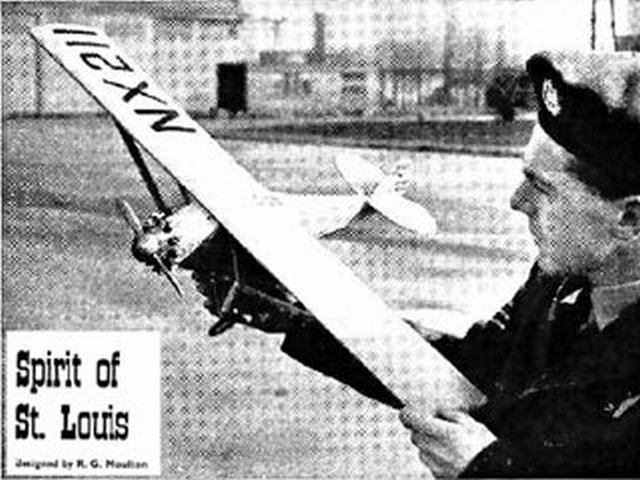