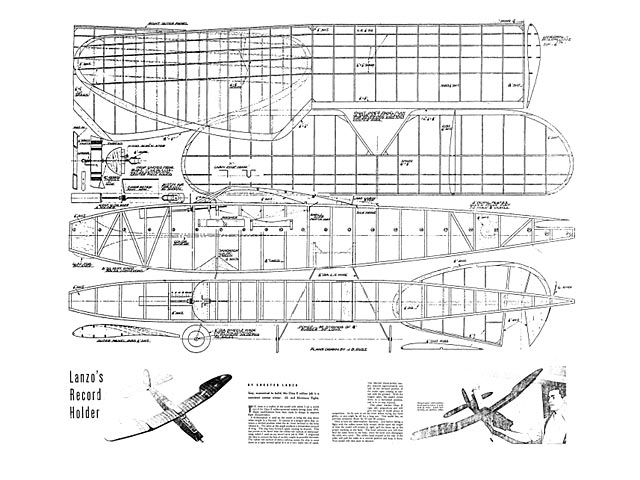 THIS plane is a replica of the model with which I set a world record for Class E rubber-powered models during June, 1941. Slight modifications have been made in design to improve flight characteristics.

A dethermalizer is used on this model to bring the ship down when caught in a thermal. It consists of a hinged cabin that assumes a vertical position when the air timer inclosed in the body releases it. The cabin at this angle produces a tremendous amount of drag. The ship loses forward speed, causing its descent. This has proven to be better than the rubber-tab method of dethermalizing, which I used on my record stick job in 1940. I originated this idea to prevent the loss of models caught in powerful thermals. The rudder-tab method of dethermalizing causes the ship to come down in a tight vertical spiral dive at a very rapid rate of speed. This inherent characteristic usually removes approximately one half of the forward portion of the model upon coming in contact with the ground. With the hinged cabin, the model comes down in a horizontal position, and is in no way injured.

This plane reaches Class B (gas job) proportions and will give any type of model plenty of competition. So be sure to set the timer before trying any hand glides, or you might be off for a long run. This model has, on previous occasions, flown for 63 and 30 minutes.

Here is how the dethermalizer functions. Just before taking a flight with the rubber motor fully wound, decide upon the length of time the model will remain in sight, pull the timer up to the proper marking on the body. The timer extension arm will then hold the cabin down to the body. When the timer arm disengages the cabin wire catch. The rubber band situated at the rear of the cabin will pull the cabin to a vertical position and keep it there. Your model will then start to descend." 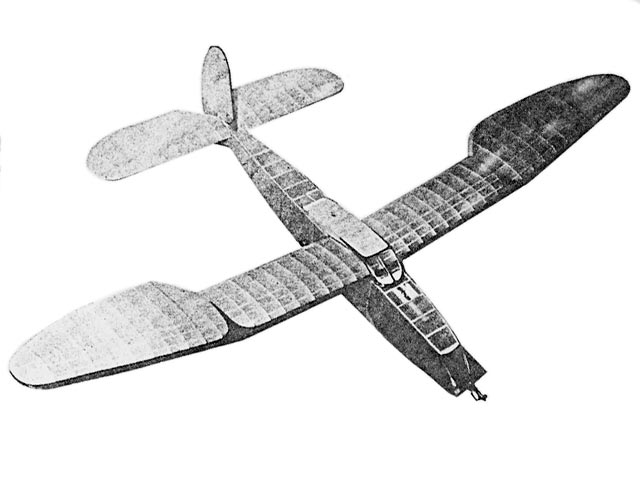