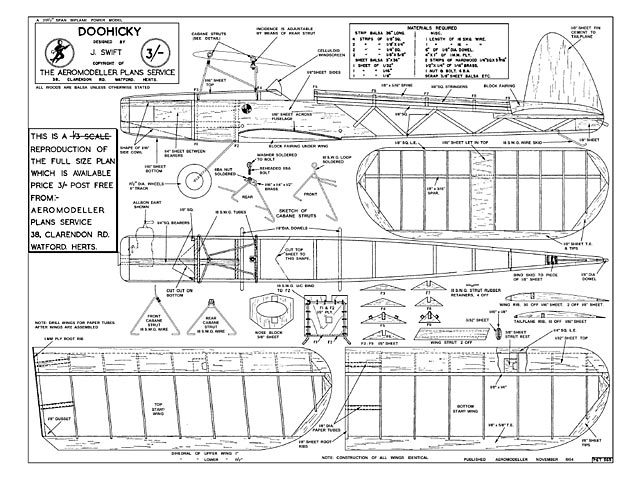 Quote: "Doohicky by John Swift. This is another of those delightful designs that can be carried about in a suitcase, flown for a whole day without fear of spinning in or breaking apart in the air, and then packed away again ready for another day. The original flew on a Frog 50, but any engine of similar capacity or power output can be used, provided that allowance is made for any difference in engine bearer spacing.

Sweepback on the upper wing adds further realism and a straight lower wing gives Doohicky a 'Hawker' air. The top wing is also the means of flight trimming for by means of an ingenious incidence changing system on the wire centre section struts, a simple arrangement employing a sawn-off 6 BA bolt and soldered washer allows the most minute changes of setting to be obtained.

Construction begins with the fuselage, and two sides are made with 1/8th sheet forward portions from F.11 back to just in front of F.6. The 16-gauge undercarriage is bent to shape and bound in place on F.2, then both F.1 and F.2 are assembled on to the engine bearers. At this stage any alteration made necessary by use of a different engine can be compensated by altering the bearer spacing. This bearer assembly now has the pair of sides attached and these in turn are joined at the rear and formers F.3 to F.9 fitted in place. Stringers follow next, and then the brass tubing to take the cabane or centre section struts. These are best held in place with a fillet of plastic wood as well as liberal coatings of strong cement.

Cover the top with 1/16th sheet, fit the engine and tank, add the cowling front to the bearers and arrange a hinged panel for access as seen in the photo here. Then add the dowels and sheeting for the lower wing seat. The wings and tail are of normal structure, and when the wings are removed from the board the upper leading edge should be sheeted and paper tubes added as well as ply facing ribs on the upper pair and strut anchorages. Lower wing has a fairing to streamline it with the fuselage.

Intricacies of the centre section struts are amply described on the plan and as the fin is a simple shape cut from sheet, the only further instruction needed is to cover with lightweight Modelspan and give two coats of dope plus colour dope to personal choice.

Flying Doohicky is a delight, and all trimming for the initial gliding tests is made by altering the upper wing incidence. Only touch the tail if really necessary and avoid a right hand power turn. The best pattern is to have a climb to the left, and glide to the right." 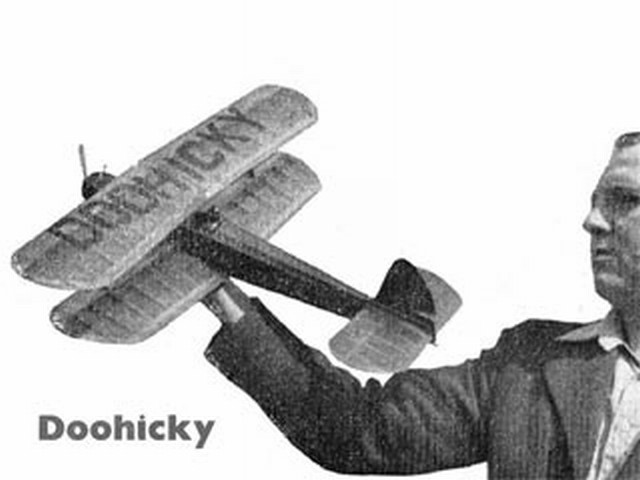