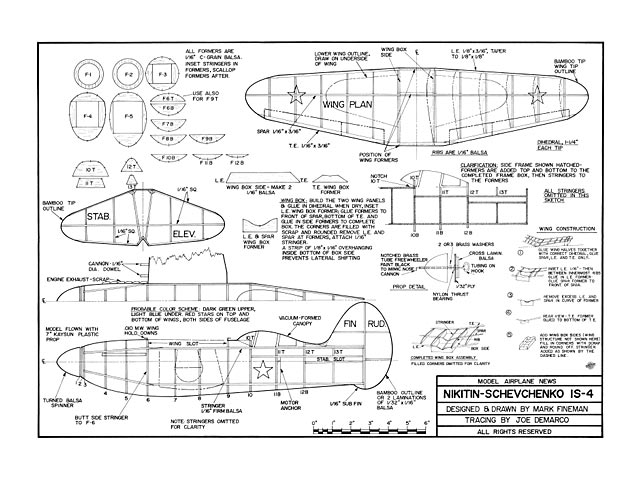 Quote: "The last of the Soviet folding-wing fighters is inherently stable with low drag and good moments, making it a fine project for WWII combat events; this one qualified at the FAC Nats.

Among the many pleasures of modeling is the ability to create a flying replica of an obscure or experimental aircraft. Watching such a craft take wing provides insights into what the designers and engineers of its full-size counterpart must have felt watching their creation as it flew. The subject of this article was just such a unique project, a short-lived but attractive Soviet fighter that reflected the conflicts among its creators.

The high command of the Soviet Air Force remained enamored of biplanes long after other air services had abandoned them in favor of the sleeker monoplanes. Such was the intensity of the biplane-monoplane controversy, that a series of peculiar aircraft was commissioned that could be flown in either form. These 'folding fighters' were designed in such a way that the lower wing could be retracted into recesses in the fuselage and upper wing, thereby allowing the maneuverability of a biplane or the speed of a shoulder-wing monoplane as the circumstances required. This early example of variable geometry was eventually dropped in favor of more conventional configurations, notably the low-wing monoplane.

The last of the folding-wing fighters was the Nikitin-Schevchenko IS-4 (named for its principal designers). It is an ideal subject for a flying model because of the inherent stability of the shoulder wing in the monoplane configuration, the narrow frontal cross-section afforded by its water-cooled engine, and good nose and tail moments. Photographs of the IS-4 have never appeared in print, but a good 3-view and perspective drawings were published in Soviet Air Force Fighters Part 1, by Green and Swanborough (Arco, 1977). The real aircraft did indeed fly in the summer of 1941, but appears to have been abandoned in the face of the rapid advance of the Wehrmacht.

My 18in span model was specifically designed with mass-launch WWII combat competitions in mind. Most of my low-wing model fighters have exhibited suicidal glides once the power ran out, so the Chambermaid-like proportions of the IS-4 had an irresistible appeal. The model recently won the WW II combat event of the Glastonbury Connecticut modelers and was one of a dozen models to qualify for the event in the 1980 FAC Nationals. It is an extremely stable plane that regularly turns in times in excess of a minute..."

Update 24/10/2021: Replaced this plan with a clearer copy, thanks to PatrickUrbain. 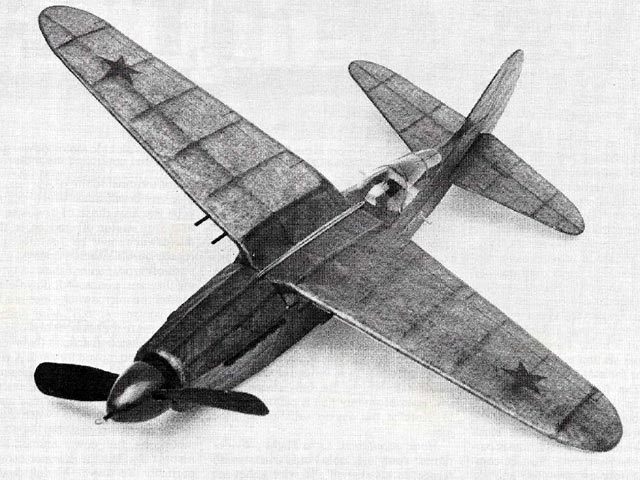