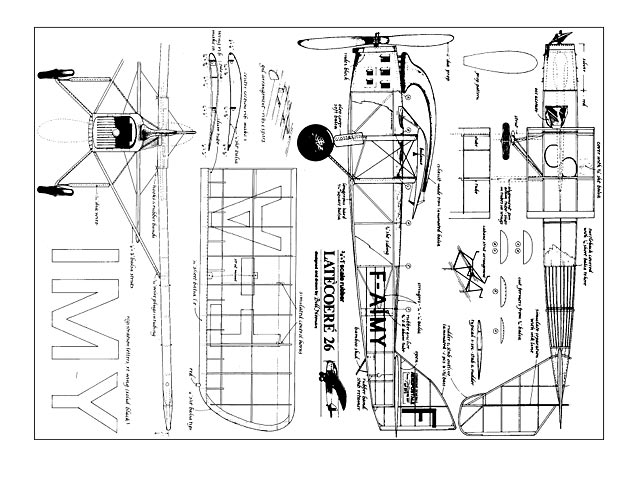 Quote: "Another magnificent rubber-powered project from the Noonan workshop. This French airplane of the Twenties has character, good proportions and easily modeled lines. Latecoere 26, by Bill Noonan.

THE PLANES TURNED OUT by the French between the wars had a character all their own. Most were lacking in harmonious proportion and were usually cluttered with curious appendages, apertures and assorted protuberances.

The Latecoere 26 maintains its Gallic character but manages to get its act together pretty well in the proportion department. This is what makes it an,ex-cellent rubber scale subject. There are just enough louvers, struts and vents to counterpoint the rather plain design. The color scheme is unusually attractive. The rhino horn exhaust is always good for a laugh at scale contests.

The model is very stable in flight and tolerates indiscriminate adjustment with aplomb. The parasol configuration and removable wing panels allow the model to absorb a lot of punishment without ex-cessive damage. Our model once flew into a parked camper, making a spectacular crunching sound, but close inspection disclosed only superficial dents and dings. It was flying again in minutes.

The Laté (sometimes the name was contracted) was a big (57 ft span) aeroplane. Fifty were built, mostly for carrying mail. We developed our model from three-views procured from the Musee de l'Air (Paris), and photos from the National Air and Space Museum, Washington, DC. The three-views show the three-cockpit arrangement with an optional cargo space in lieu of the aft cockpit. Photos show a great number of detail differences in production aircraft. The prototype machine had a horn-balanced rudder, whereas production aircraft had a plain break between fin and rudder. Some 268 had corrugated metal fuselage sides from the middle of the fuselage forward, and also a conventional exhaust pipe running aft on the starboard side of the fuselage. Some had oleo struts, some did not. F-AIMY had a quaint windshield which we felt was an appropriate foil for the outrageous exhaust. Our model has consistently placed high in Flightmaster contests. It is capable of one-minute flights, but averages 45 to 50 seconds.

FUSELAGE. Lay waxed paper or plastic wrap over plans before positioning 3/32 sq hard balsa longerons over the side view. The first upright immediately behind the 1/4 in sheet cowling is 3/32 sq, followed by the next three..." 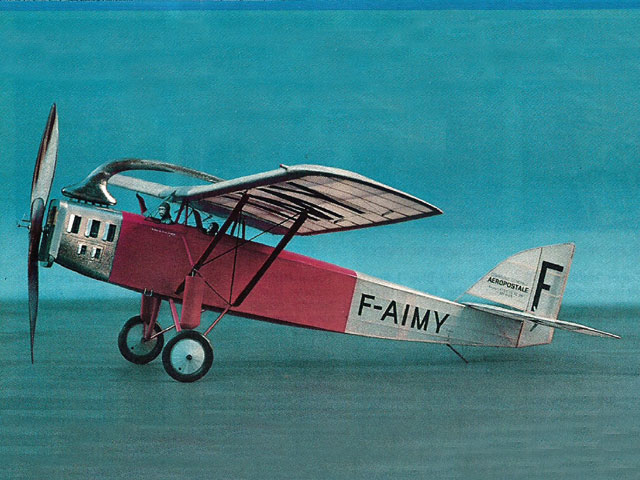