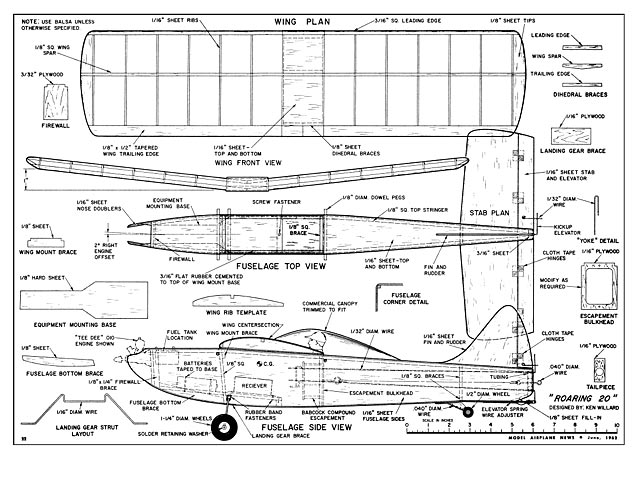 Quote: "Twenty inches long; twenty-inch span; super hot performance with a Tee Dee .020. And that's where the name 'Roaring 20' came from. But don't let it scare you from building it because you can build up gradually by powering the model first with an .010 until you learn all about its flight characteristics. For most fellows, the .010 version will be plenty satisfactory anyway.

The Roaring 20 is a direct descendant from the Gasser (oz2505) and the Scorcher (oz1184). The same general force setup is used, but a comparatively thick airfoil tames the model down and makes it a very reliable and maneuverable job. The fuselage bellies down a little more - this is required in order to accommodate the Babcock escapement without having to cut it down. Only the light weight transistorized receivers which operate on three volts are recommended, otherwise the weight builds up too fast and the model would be far too tricky.

Also, you will note that the plans show the batteries soldered at the connections and taped to the mounting base. Two reasons for this: it saves the weight of a battery box, and with two Eveready E91-energizers that are really fresh when you put them in you can fly practically all summer. Like all small models, the Roaring 20 reacts rapidly, but by varying the amount of rudder throw you can go as gentle or as wild as you like. More about that later. So, start it now, and fly it next weekend.

Wing: The wing is conventional, single spar construction. Sometimes people ask me why I put a spar along the top. There's a good reason..." 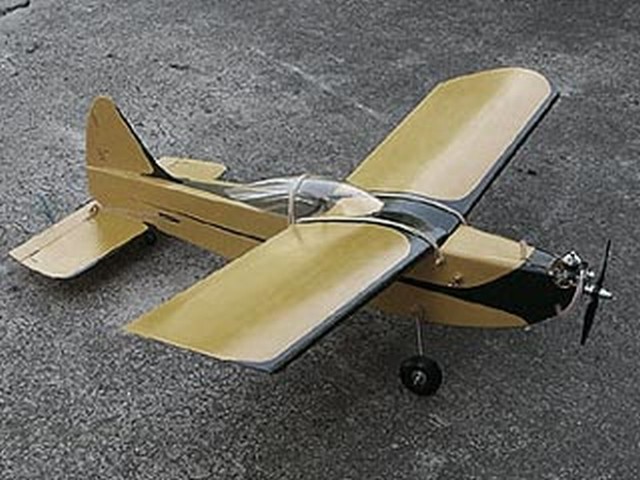 Colour photos of his completed model [more pics 003, 004] are thanks to bhibbets who says quote: - "Roaring 20 by Ken Willard built from your plan #1429. Flying weight is 6.75 oz (US) with an E-Flight 250 motor and 2S 800 ma battery. Flew one in the 1960s with a Cox .020 and an escapement system, and later converted to an ACE pulse rudder radio. Many, many successful flights then and now."
SteveWMD - 11/03/2013
Thanks for making the Roaring 20 kit plans available. I built one from the Top Flite kit in 1964 or 1965 as my first RC project. I used a Pee Wee .020 to power it and a Controlaire single channel transmitter and relayless receiver with (I believe) a Citizenship escapement. I flew rudder-only and enjoyed it very much. I'm considering getting back into RC and might build a new plane and power it with my original engine or an electric motor.
RichYarrows - 01/08/2016
Pictures of my recently completed Roaring 20 built from plans on your site [more pics 007, 008], taken just after the first flight to avoid bad karma, no pix before test flight. I had to make a few changes for modern equipment, a nose heavy condition was only cured by moving the two micro servos back to the tail and cutting about an inch off the nose, with a new firewall. Powered by a 250 motor, 1510, 2200 KV, plenty of power with a 2 cell 300 lipo and Cox 6x3 prop, 5 amps. A Berg 4 receiver with added short antenna, 2 smallest micro servos that come with standard connectors, Castle 10 ESC complete the equipment. Weight ready to fly with battery, slightly under 5 ounces. Mine is covered with Doculam trimmed with a little Rustoleum, probably lighter than the same model I had about 1964, built from the Top Flite kit. Top Flite modified Ken's design by including special wide, thin balsa for wing sheeting, probably heavier but bulletproof. Balsa like that is not available these days, that's why I used the magazine plan version. I weighed the wing ready to cover at .37 oz, covered with Doculam, .50 oz, total with Rustoleum trim, .55 oz. Covering and paint didn't add much. I think the 250 motor has more power than my original Cox 010, and certainly cheaper. My engine cost me $7.95 back then. If you want one bad enough, a new one from Cox International will only set you back $195.00. One of the pictures shows Ken with his custom box for the Roaring 20 [more pics 006]. Ken was a weatherman and frequently traveled by air. His box, with everything he needed to fly the model, would fit under an airline seat. You could do the same thing today if you included a small ParkZone transmitter and a few batteries, keeping your Roaring 20 away from the tender mercies of baggage handlers. Thanks to OuterZone for keeping this classic alive.
DougSmith - 18/10/2016
I've built a Roaring 20 from your plan [more pics 009-011].
AlanDavis - 17/07/2018
Add a comment