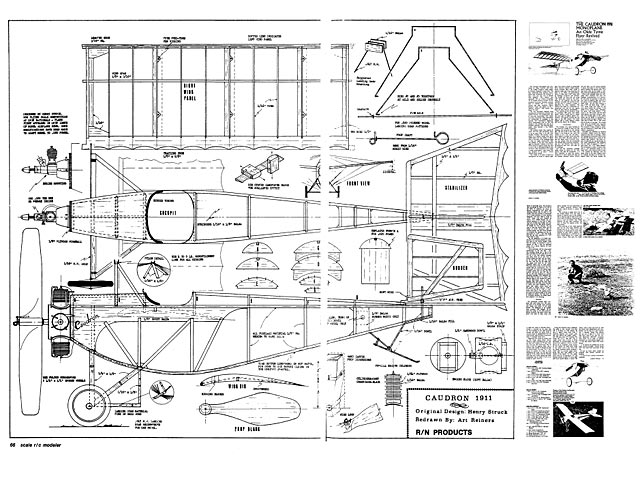 Quote: "The Caudron Monoplane was produced by Rene Caudron and flown in the United Kingdom Aerial Derby at Hendon, England in June 1912. The racy appearing little Caudron monoplane was introduced into England in early 1912 and was one of several new designs. This version was equipped with an Anzani 6-cylinder, 45 hp engine driving a 6-foot 10-inch propeller clockwise. Available pictures tend to indicate that a 4 cylinder engine was also available (Henry Struck's model was based on the 4 cylinder version.) Top speed was about 75 mph.

The real aeroplane featured wing warping and conventional elevator and rudder controls. The landing gear was of rigid ash construction with rubber cord axle mountings. More information on construction is available in the October 1912 Aeronautics Magazine. Other performance data on this little beauty is very sketchy and may be of doubtful accuracy. The following illustration does provide a few helpful dimensions.

The original model was copied directly from the real aeroplane which is not an easy thing to do with most models. However the Caudron monoplane is a natural - large prop, good detail items and low center of lateral area in the belly of the fuselage make it ideal for scale construction. With the addition of the new wire landing gear for strength it makes a nice flyer. Henry Struck's original 1911 Caudron (oz587) model was able to turn in 25 to 40 second flights from an ROG start. Since this is no longer a scale requirement I have found that our Caudron will do about 1 minute without much trouble.

Our model is of basic construction throughout - no tricks or special gadgets. The version shown is essentially Henry Struck's original model design. Some changes have been made in material sizes and wing mounting but there is no effect on performance. Henry's model used 5/32 in balsa strip for fuselage longerons and spacers. The models we have built are using 1/8 stock due mostly to the availability of 1/8 material. The wing was originally mounted with aluminum tub-ing and wire to provide. a means of detaching the wing assembly. The method now used is a permanent ar-rangement and with all the rigging does not lend itself to disassembly.

Two versions of the Caudron model are provided: .020 power and rubber power. Henry's model was for rubber only and was of slightly lighter construction. The dummy engine was not used on the .020 version. The model adapts well to small electric motors such as the Hytork 48 or Mattel.

Construction. The modeler may begin building at any point but I prefer to start with the fuselage and progress to the landing gear, tail and wings in that order. This model is not large so any good flat surface of 24 x 36 in can be used. I use a piece of cellotex to pin the parts down and cover the plan section in use with Saran wrap to prevent sticking..." 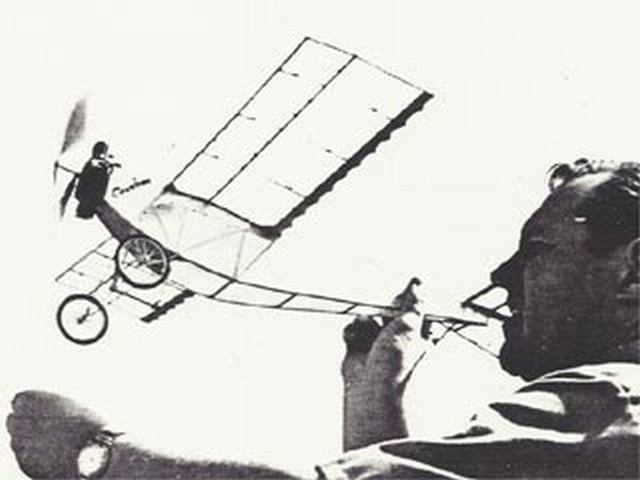