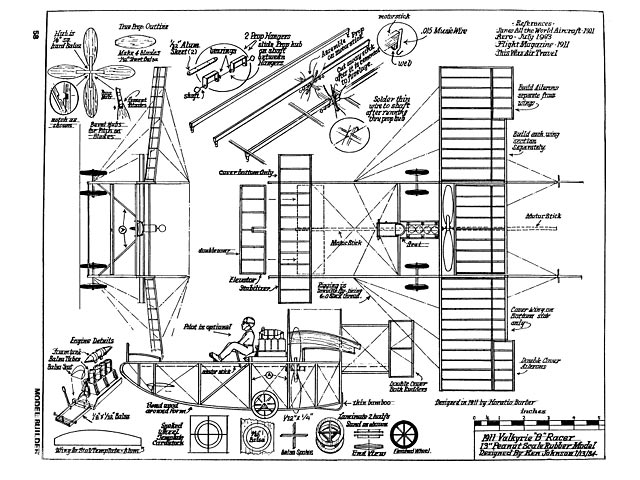 Quote: "VALKYRIE RACER: In the August 1981 issue of Model Builder, a photo of the Valkyrie-Type 7 canard monoplane appeared in this column. It was the first Valkyrie this author was to build. The year was about 1967, and the meet was in Pittsburgh, PA.

A later racing version of this plane was noted in a book called This Was Air Travel. A search of an early Jane's All the World's Aircraft netted a good two-view of the racer. A 16-inch model was drawn and constructed. The configuration of the open fuse-lage warranted the use of a solid motor stick to support the rubber motor. As the propeller was located near the center of the plane, a rear-placed motor stick was tried. The model was tail heavy.

Then, a forward motor stick was substituted, and the CG was nearer the ideal position. Although somewhat nose heavy, the forward plane angle was increased and the model flew well. The major complaint was that it was difficult to attach the knotted end of the rubber (fully wound) to the front hook. This was accomplished by using an extension hook to clear the front end of the plane, and then removing this hook with the winder after hook-up.

Later, an 11-inch version of the racer came off my building board. It flew OK, but not as well as the larger version. The size of the small model made construc-tion of the four wire wheels difficult, and I was not proud of my workmanship on these wheels. Both models remained with friends when we moved to Cali-fornia. More recently, a photo of the Valkyrie B was printed in my column (Dec. '83), and I received several inquires (or plans and information on it.

It was decided to scale the plans to 13-inches (Peanut size) and feature it in the column. The model plans were drawn right over the two-views, so the model is very faithful to the real machine. The rib spacing is true to scale, as are the stab and fin sizes.

One deterent to a modeler tackling this subject (I felt) was in constructing the four wheels. Before the days of the marvelous Hungerford spoked wheels, many builders shied away from early planes because of the wire wheels. I feel that to make the Valkyrie attractive to model, the wheel construction has to be simplified somewhat. Sure, you can journey to your local hobby shop and plunk down the $17.00 for the Hungerford wheels, or if that sounds a little steep, you can build the Johnson version shown on the plan. It's up to you.

The all-balsa wheels are built in two halves and cemented together. The one-inch size made me think that a simple eight-spoked version was in order. The purchase of a circle template from the local drafting or art supply store is necessary. The one-inch outline of the wheel is traced onto white card stock and a smaller circle is centered inside of the outer ring. A vertical and horizontal line are drawn through the center of the rings. This will be the plan over which the eight half-wheels are constructed.

The same circles and lines are drawn onto soft 1/16-inch sheet balsa. Next, carefully cut a line along the inside circle with a NEW, No.11 Uber Skiver knife. Be careful not to tear the wood as you repeat this cut on each of the eight inner circles.

Then, wrap a short length of fine sand-paper around a 3/4-inch diameter cylinder, and sand the inner circle smooth and round on each. The outer circle of the wood rim can now be cut and sanded smooth and round. One at a time, the wood rings are tack glued to the card stock plan and the four 1/8 x 1/32 ribs are cemented in place. Note that the grain on the ring is parallel tothe vertical rib direction.

When all eight half-wheels are com-pleted, cement them together in twos, making sure that the rim wood is cross-grained on each wheel. See the plan for clarification.

After the wheels are dry, sand the spokes at an angle toward the outer rim on each tire. Then, sand the tire on the outside edge only, to the rounded shape of a tire. Spray the entire wheel with black enamel, and then paint the outer edge of each spoke silver. The inner edge of the tire will also need a coat of silver.

The only task remaining on the wheels is to sink a small hole at the hub for the axle wire to pass through each wheel. A very thin beading needle is ideal for this task. The resulting spoked wheels are presentable, and take only an hour or so to build.

The fuselage of the Valkyrie is like two giant sled runners. The structure is open and braced with wire. We will use fisherman's fly tieing thread to simulate the wire rigging. The 1/16 x 1/16 soft balsa structure is precolored with Dr. Martin's concentrated water color dye. I use a Q-tip cotton swab dipped in brown dye to do the job. Simply run the swab along the length of the wood on each side, and allow the pieces of balsa to dry before beginning construction. The bottom longeron is taped to a card-board form (precut to the proper curve and sanded to a smooth shape) while wet and baked in a 300° oven for 20 minutes. The thread bracing is cemented onto the fuselage sides while they are still pinned down to the board..." 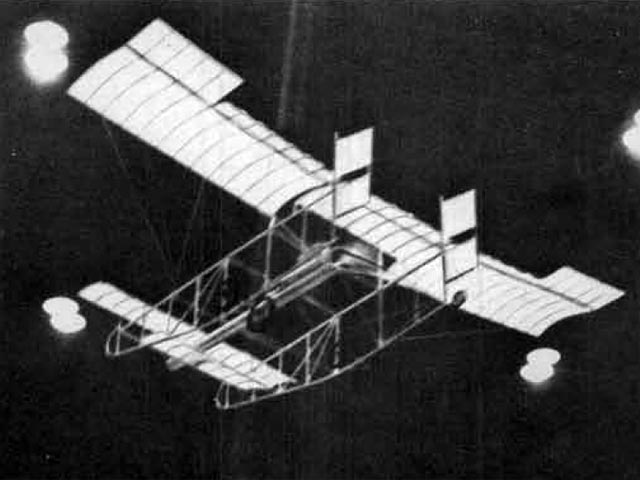