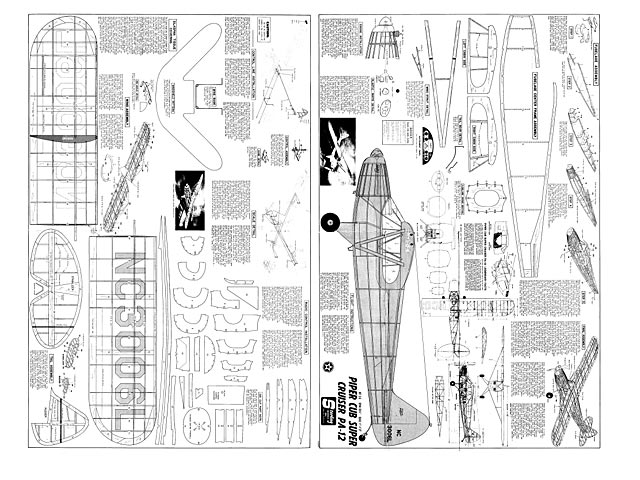 Quote: "Products in Use: Sterling's Piper Super Cruiser for Rubber or Gas, by Fernando Ramos.

What's in a kit? ln this day and age there are certainly many varied kinds of model airplane kits, and not since the days of Cleveland, Megow and Peerless have there been as many scale models to choose from. One company that has helped the scale modeler is Sterling. They have been coming out for years with flying scale models that can be adapted to either rubber or gas for power, and some are suitable for small radio installations. Recently, Sterling issued a new series of three airplanes, all at one inch to the foot scale, of the Piper Super Cruiser, Citabria, and Curtiss P-40. I chose the Super Cruiser to build since it has been a favorite of mine over the years, and I decided to build the gas version, using the Cox Pee Wee.

Even though l have been building model airplanes for as long as I can remember, I spent quite a bit of time reading over the plans and directions. Kits usually have steps that should be followed, otherwise you could end up doing twice the amount of work.

Typical of most all of Sterling's kits, the fuselage construction is of the crutch type, which allows for - take a sanding block and sand the back side of each printed sheet. This enables you to remove the parts more easily, with less chance of breaking.

I laid out the keel pieces over the plans, followed by the various bulkheads. To keep the bulkheads vertical, I sandwich them between some small paint bottles, this saves time and keeps things aligned. When the bulkheads are dry, a side keel is glued in place, and when this is dry, you can remove it from the plan and build the other side.

Before going on, I decided what modifications should be made, if any, for the gas powered version. The first step was to take the plywood firewall furnished in the kit and install blind nuts on the back before gluing it in the proper location. The only other change was to lace the landing gear wire to a plywood bulkhead instead of sandwiching it in between two balsa ones. The latter method would be all right if you are building the rubber powered version.

After putting on the cabin sides and a few of the stringers, the fuselage took on a very realistic look. One engineering item that impressed me was the fact that the bulkheads were scalloped between stringers, unlike most kits of this type. This of course, avoids unsightly bumps in the covering and adds to the realistic appearance of the model.

One addition which l felt the gas powered version needed was to sheet the front end of the fuselage where the cowling would be simulated. Besides realism, it also gives a great deal of strength where necessary. l measured and found that the Cox Pee Wee .020 would sit inside the cowl, on its side, without having to cut any openings, other than for the exhaust gases out the bottom.

In order to save time - l thought - I would put on all of the stringers up front, figuring to balsa sheet in between them. Was I wrong! This operation took me as long to do as it did to build the entire fuselage! l even traced each section on tracing paper, using it as a template - never again! I should have under-cut a couple of bulkheads and used sheet balsa instead. One thing for sure, it is certainly strong! All that remains is to bend up the tail wheel wire and glue it in place.

I built the stab and rudder next, with one slight modification. I laminated the surface outlines using basswood. This is something I happen to prefer to do even though, unlike in many kits, the outline parts are not excessively wide. However, laminating wood makes a very strong, warp resistant structure. The tail assembly took no time at all, even though I hinged the elevator and rudder for trim purposes - and perhaps for the added realism.

Now for the wings. No matter what model I’m building, the wings come last! Wings are wings, and to me, not very enjoyable to build - but to each his own. I looked at the drawings carefully then punched out all of the parts. The construction of the wings were very well engineered, and to my surprise, went together faster than any wings I have built in years. Everything fitted perfectly!

At this stage the entire model was given a thorough sanding and sub assembled for photographic reasons, including the engine. Next month I will report on the finish and flying of the model. This time of year the grass is tall and green, just waiting for those first test flights." 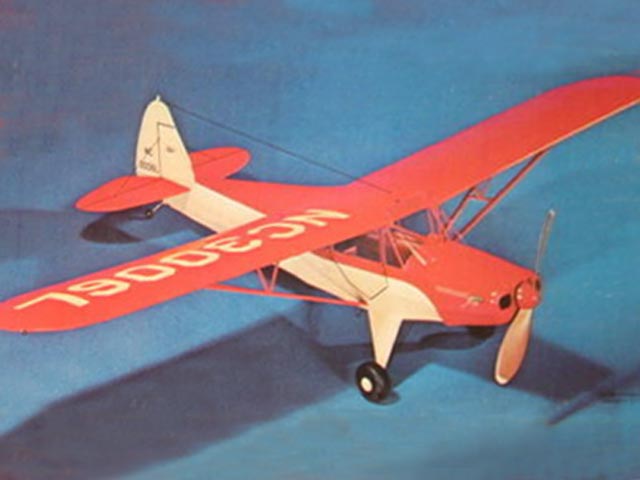