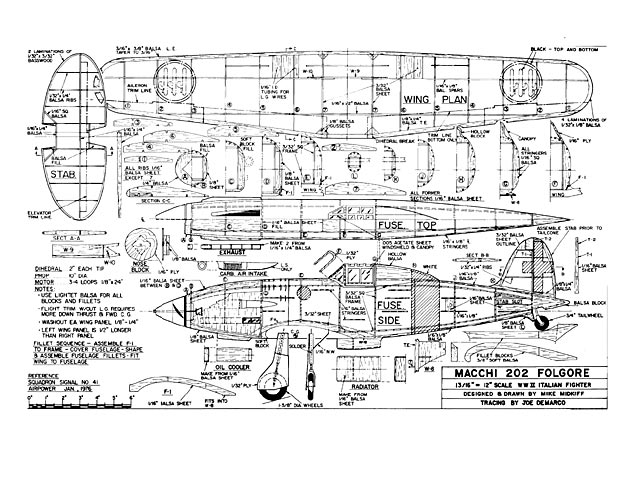 Quote: "Here's one of WW II's most aesthetically clean designs. A natural for F/F competition. Macchi 202 for Rubber Scale, by Mike Midkiff.

Perhaps the most colorful and aesthetic fighter aircraft to come out of WW II was the MC 202. The Folgore (lightning) with its spotted green-on-yellow color scheme, multi-colored insignia, and prominent carburetor air scoop is a modeler's delight in both color and shape.

The MC 202 was originally a private venture by Macchi Aircraft under the guidance of their chief designer, Mario Castoldi. Italian aircraft industries had, up until then, largely ignored fighter aircraft development incorporating an in-line engine. However, the availability of the German DB 601 in-line engine complemented by inclusion of flying surfaces from the radial powered MC 200 blended into a very pleasant to fly yet high performance aircraft.

This well sculptured aircraft was constructed in a clean, robust manner. The aircraft featured self-sealing fuel tanks, split flaps, and integral pilot armor. Another unique aspect of the MC 202 was the somewhat sophisticated method of torque control accomplished by increasing the length of the left wing in comparison with that of the right wing. Probably the only complaint one can point to was the initial anemic armament consisting of two 12.7 mm cowl guns. In the hands of an experienced airman, the 202 was truly a dangerous adversary and by all accounts, she was a pilot's airplane.

General construction notes: Balsa is used throughout the construction of the model except the stabilizer outline, nose block disc, and the canopy windshield and frame. All balsa should be the lightest available except for the four main longerons which are medium hard 3/32 square stock.

The landing gear is designed to be removable giving one the option of flying with or without. The rear canopy headrest fairing is carved out of soft balsa, but not assembled until covering is complete. The fuselage tail cone is carved out of soft balsa and assembled only after the stabilizer is glued in place. The canopy is made from flat acetate sheet glued over the framing.

Fuselage: I usually start construction with the fuselage since it is the most difficult and, therefore, want to get it over and done with. Also, the fit-up of the flying surfaces to their respective fuselage locations can be checked as you go along.

Build two side frameworks directly over the plan where it shows cross-hatching. The longerons are from medium/hard 3/32 square stock and the uprights are soft 3/32 square balsa. Two wing saddles are cut out of light 3/32 sheet and glued to the bottom longerons. When the two side frame-works are dry, remove and add all of the light 3/33 cross pieces. These are shown in the true length in the plan top view.

Cut out all of the formers (B through L) from light 1h 6 sheet. Shape each as shown in the appropriate cross-section and glue to each respective cross piece or upright. Add soft 1/8 sheeting to each side from B to D and also on the bot-tom. Cut out two W-8's and glue them as shown in the side view and section G. Notch out for the five 1/16 X 1/8 center line stringers and glue these stringers in place. Notch out for all the other 1/16 square stringers and glue in place. Cut out two F-1's from soft 1/16 sheet and glue to the notches in D,E,F, and W-8. Cut out and glue in place the '/4 sheet front cowl ring. Sheet with 1/16 balsa between the stringers from B to D on top..." 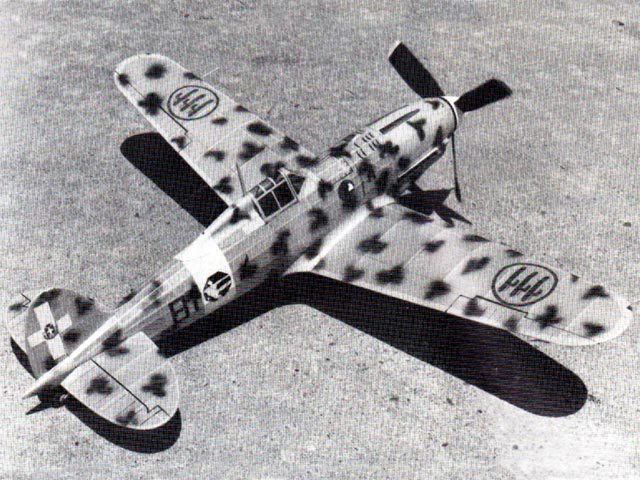