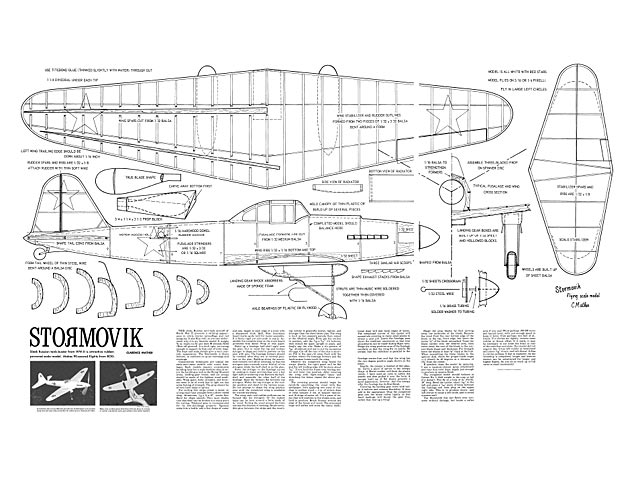 THIS sleek Russian anti-tank aircraft of World War II presents a striking appearance in white winter camouflage and red insignias. It also flies well, so you can understand why it is my favorite model! It weighs 3/4 oz ready-to-fly and does 90 seconds ROG (Rise-off-ground). It is built light, yet strong enough to support its thin coat of color dope. The dope and scale details give a very realistic appearance. The Stormovik is flown indoors, or outdoors on quiet mornings and evenings.

Construction techniques are typical for stick-and-tissue models with round fuselages. Such models require considerable building time but a scale modeler should enjoy the building as well as the flying! Sheeted areas, landing-gear boxes, and air scoops should be made of the lightest wood available. Wing spars, body stringers, and formers need to be of wood that is light yet has some feeling of strength. The prop should be of very hard balsa or spruce.

For cutting thin strips obtain a metal, or a long steel ruler straight from a sheet-metal shop. Aluminum, 1/40 x 1/2 x 18in, works fine. Sand the edges smooth. Thin razor blades (not stainless) can be broken to a sharp point for cutting. Titebond glue is recommended for its low-shrinkage property. Squeeze some into a bottle, add a few drops of water and mix. Apply to each edge of a joint with a sharpened stick. Soft, fiber insulation board works quite well for model assembly. It is fairly rigid yet pins push in easily. Assemble the complete plan on the work board, protected with Saran Wrap or wax paper.

Form the stringer to the fuselage curves by soaking in water and bending over a hot light bulb or soldering iron. Remove the half-shell and assemble the other half of the fuselage. Sand the formers flat between the stringers. Widen the top stringer at the rud-der position and sheet-in the various areas. Do not attempt to shape the wing position area until the completed wing is available for custom matching.

The wing, stab, and rudder outlines can be formed like the stringers. Or the soaked balsa can be bent around a form made of 1/8 wood. Pulling the wood around the form reduces the chances of kinking. Brush extra-thin glue between the strips and the resulting outline is generally neater, lighter, and stronger than the sheet balsa type.

The wing is built as two separate panels, then joined at the dihedral angle. First, pin the outline in position, add the 1/32 x 1/16 rib bottoms, then install the spars upright in place, and finally cap the ribs. Make a rib pattern of 1/32 aluminum and use to cut the numerous rib caps..." 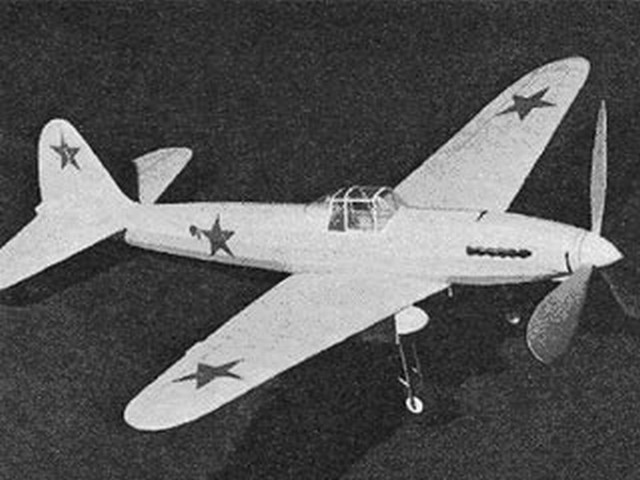