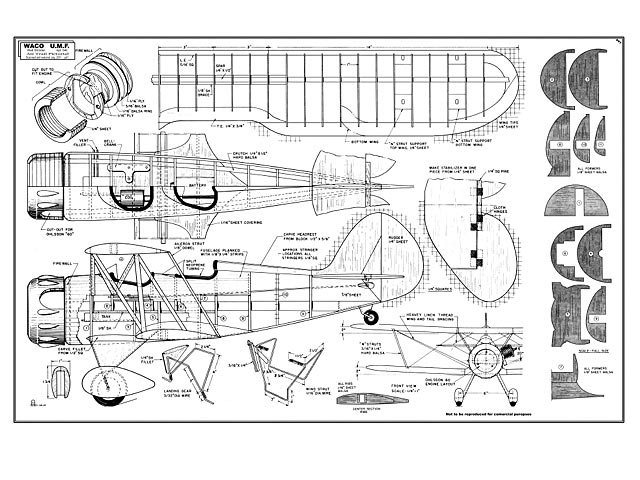 Quote: "All you Ohlsson '60' fans can stand up and cheer - here is the model for your engine. Waco UMF, by Walter Schroder.

THIS Waco, product of the early thirties, was the plane in which many of the present day airline pilots and executives of the aeronautical industry trained. Developed primarily for the fledgling Army and Navy Air Forces, it was also quite popular as a private trainer on the many small fields which mushroomed throughout the country. Its capacious front seat with room for two also made it ideal for those $1.00 sight-seeing hops so popular in those days.

This biplane represents the days when every plane had more glamour in its right wing strut then the present stripped-down, aerodynamically perfect jobs that you hear but can't see as they streak by.

Of course many of the younger set will say that old-timers glory in living in the past and resist progress. If any of the modern set ever attended a county fair or small airport and experienced the thrill of watching a parachutist or stunt man climb out between the wings and make his way back and forth between the struts and guy wires while performing dare-devil stunts, he or she would soon admit that today's scientific exploits couldn't hold a candle to the by-the-seat-of-the-pants flying era.

The UMF's proportions are ideal for scale and stunt work, and require no alterations from scale, Any builder who has been attending control-line contests and has watched the flight attempts of the average entry in a beauty scale event, will welcome the excess of power called for here. So what if the engine does protrude through the cowl. You're not cutting down on scale - it's still the same - but there is more than enough power for any condition or emergency.

To keep appearance and facilitate choking the engine it is mounted at a 20° angle, offset from the vertical. The radial mounting advantages of the Ohlsson '60' engine have been employed. If another engine is used insert the conventional beam type motor mounts. The minimum size for such mounts should be 3/8 x 5/8 in by whateve length is desired. Such mounts should extend rearward through at least one station to the rear of the firewall.

To start construction, scale up the plans as required. The fuselage requires little in the way of plans. As a matter of fact all that is required is the crutch drawing. To lay out the crutch, plot the station positions and then use the full size bulkheads to secure the widths at the respective stations. Now place the 1/4 x 1/2 in longerons over the plans. If necessary soak the longerons in hot water four or five minutes..."

Quote: "Here's a Waco UMF by Walt Schroder from April 1948 Air Trails pictorial. When I was very young my dad's friend built this one, It's a beautiful model. He had a Torp 15 in it. I have no idea what Walt Schroder was thinking when he put an Ohlson 60 in it, it's only a 34 inch wing span. Talk about overpowered. Made me think of Jimmy Franklin's WACO with the jet engine. " 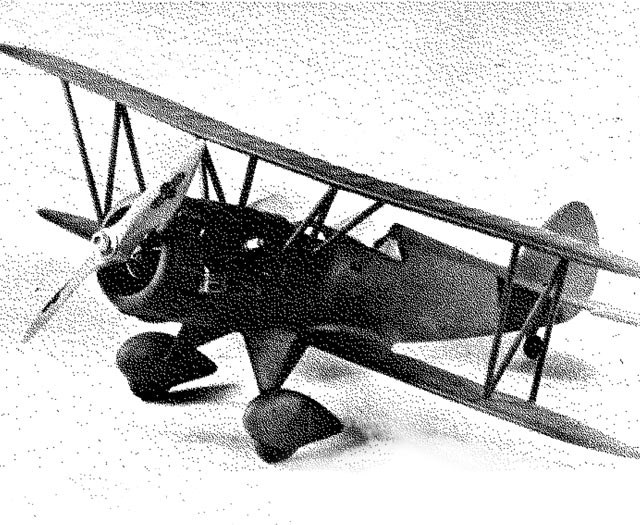