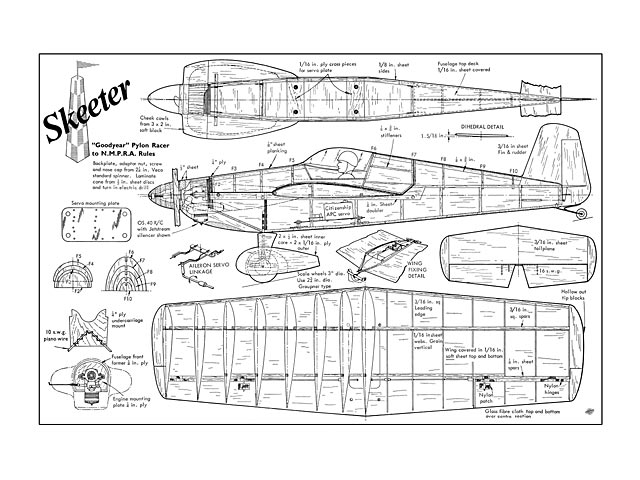 SKEETER is one of the earliest full-size Goodyear racers and was originally named La Jollita. Although never the fastest, it has always been admired for its perpetual good looks, throughout the many modifications it underwent at the hands of successive sponsors.

It is still, in the opinion of many people, one of the prettiest of the 190 cu in displacement racers, blending as it does the practical approach of a Wittman design with the scientific lines of a Cosmic Wind or Shoestring.

Skeeter is presented here in its 1951-52 form, in which year its Goodyear Race qualifying time was 181 mph. However, it was eliminated in the second head.

The Model: Construction is fairly simple, but great care must be taken to save every ounce of weight, particularly at the nose. The original weighed just 5 lb, the overweight being due mainly to a heavy finish and 2 oz of ballast at the tail. The minimum weight of 4-1/2 lb should be achieved, since speed and flying characteristics deteriorate with every excess ounce.

Citizen-Ship APC proportional radio equipment was used in the prototype model in both three and four servo models. The four servo system was finally standardised, since the mechanically coupled rudder/ aileron arrangement of the three servo system would result in slight trim changes if the wing shifted.

The model drawn here is as near as possible to exact scale. The engine is radially mounted to a 1/4 in ply former and held onto the fuselage with rubber bands. I have used this system for many years now on all sizes of engine and would not, through choice, use any other.

Wings are held on by internal rubber bands on 'S' hooks between 1/4 in dowels. They are strapped on very tightly, but still give a little in a heavy landing. Bolts, Dzus or Camlock fasteners may be used easily and are advised if the mechanically coupled rudder/aileron system is used. Do not eliminate the glass fibre reinforcement inside the fuselage from the firewall to aft of the wing.

The cowl cheeks and cockpit canopy moulds were made from 3 x 2 x 30 in soft balsa block, but may be easily built up from 1/2 in sheet, especially if the scale shape is modified slightly. The specially shaped spinner is a must if the character of the full-size aircraft is to be retained. The cone and nosepiece was 'turned up' in a 1/4 in electric drill. The balsa was then covered with tissue and coated with balsa cement before painting.

First flight is likely to be a somewhat nerve shattering experience as there is little inbuilt stability, since the full-size machine was intended to have a high rate of roll.

To tame the model, reduce control surface movements below those shown if possible, as tight turns are not required during the testing stages. I do not advise flying on ailerons only, as recovering from a turn is much improved by a coupled rudder. Be sure that the airframe is absolutely true since at the flying speed of this model a warp is invariably fatal. The engine has 3° downthrust and 2° right.

Take-off procedure for this and another similar model, is to set the rudder about 1/4 in over to the right (by control column, not trim - assuming you have proportional control) and the elevator about 1/4 in up. As the model accelerates, gradually centralise the rudder and if the model does not lift by itself, ease in some up elevator after a run of about 100 ft, depending on how long the model takes to gain speed. Hold that elevator setting as the model rises and concentrate on directional control. Maintain a straight heading and gradually neutralise the elevator, but do not commence a turn below 150 ft altitude.

Landing with this model, as with any other, is the most difficult part of the flight, and necessitates careful familiarisation with landing characteristics. Introduce landing trim at a safe altitude, and refrain from applying elevator corrections on the approach. Do not try to flare out as the stalling speed is very high and a stall on the landing approach is sudden death.

The model, incidentally, is reasonably aerobatic with a surprisingly tight looping radius, and will execute consecutive upward rolls." 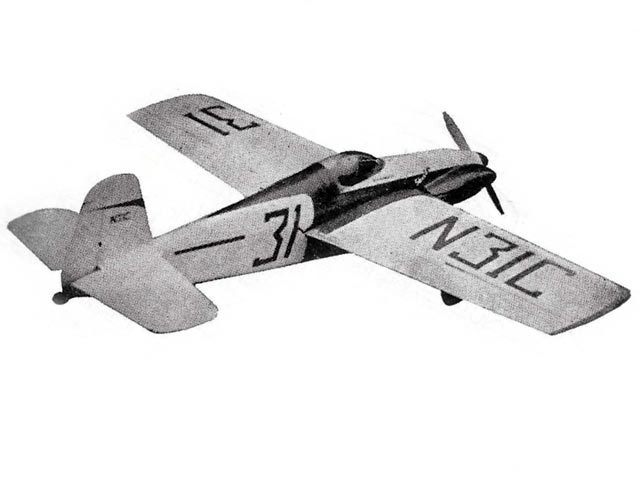