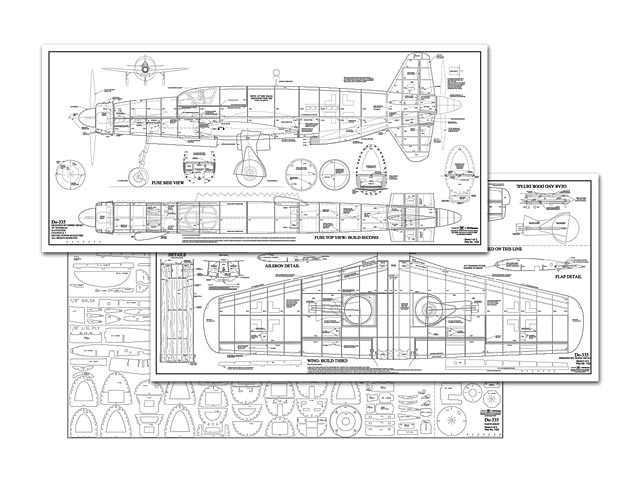 Note this plan is a free download available from the Model Aviation site at https://www.modelaviation.com/dornier-pfeil-micko where it appears along with the full build text and some great build pics. Also a free download of the plan in tiled format.

Quote: "There are some full-scale aircraft that simply look menacing, even while on the ground. I think the Dornier Do 335 Pfeil is one of those aircraft. First flown in October 1943, Dornier utilized its knowledge of multi-engine aircraft to create a twin that had its engines on the centerline of the fuselage versus on the wing, resulting in a much more streamlined design. This feature was, and still is, uncommon for multi-engine designs.

Other unconventional features were that it was one of the first aircraft to utilize an ejection seat, and there were explosive devices on the rear propeller to help protect the pilot during a bailout.

The aircraft was massive for a single-seat design. Its wingspan was 45 feet and it was more than 16 feet tall. Offensive weapons included two 20 mm cannons, and it could also carry an internal bombload. Fortunately for the Allies, technical delays prevented the Pfeil (Arrow) from reaching mass production and its full potential.

The Model: Similar to some of my previous designs, the Bearcat and Polikarpov I-16 Rata (oz11094), the 335 is designed with scale outlines but features a stick-and-tissue Free Flight stringer look. The result is an accurate-looking model of the full-scale aircraft but with a lower wing loading for gentler flying.

The model features CAD-designed interlocking parts and is built using plywood, light plywood, basswood, and balsa. To help simplify operation, the model can be built powered with only the front motor (tractor) or with both the front and rear motors. The front motor uses a Power 60 motor, 80- to 90-amp ESC, 16 × 8 three-blade propeller, and a 5,000 mAh 6S LiPo battery. This combination offers good flight performance; however, a modeler can add the second motor if he or she wants a twin.

The plans are available as a free digital download from Model Aviation online. Should you choose not to cut the parts yourself Manzano Laser Works sells the parts in a short kit, including an available canopy from Park Flyer Plastics.

The spinners are modified versions of Paul Kohlmann’s M.20 design. These and the nose gear file can be found on Thingiverse and can be 3D printed. Construction details will cover the main points of building the model and are excerpts from the construction manual. The full manual is available for download on Manzano’s website..."

Note see also the prototype build thread by D-Rock on RCGroups at https://www.rcgroups.com/forums/showthread.php?3464395-Fun-Scale-Dornier-Do-335 for more details and great pics. 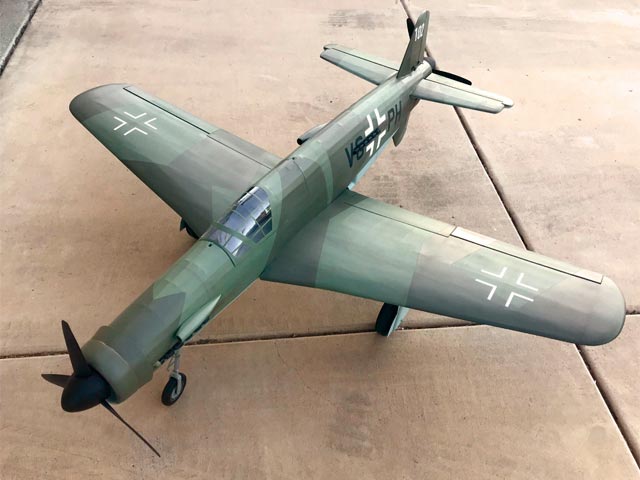