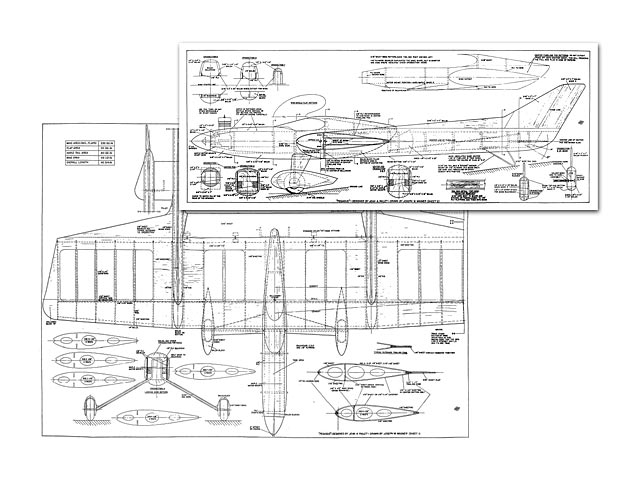 Quote: "This Pegasus, unlike its namesake in Greek mythology, is not a flying horse; nor does it fly as you might imagine a horse would. The original Pegasus model, shown in the accompanying photos, did have one horse-like aspect, however: it was as heavy as a horse. It weighed 56 ounces which is kinda horse-like for a high-performance stunt model. However, in spite of its obesity (probably inherited from the designer), it flew well.

The reasons for the existence of the Pegasus model are the author's desire to determine the merits of a flying (or 'slab') tail coupled with his naturally rebellious nature. The rebellion, of course, is against the established trend towards conformity in stunt model design. I'm just plain tired of building the same old model over and over again; which is basically the case. even when there is a bit of variance in the external shape. I for one am wholeheartedly for the establishment of a Scale Stunt event and am currently experimenting with a stunter utilizing a biplane configuration with just that kind of event in mind.

While I am ready to admit that today's stunt models have been empirically well proven to give the best performance in the event as we know it, what I am suggesting is that what is needed is more emphasis on design originality in the scoring system in order to encourage the stunt fliers to work as hard with their heads as they presently do with their wrists. Ah, but I digress - back to the Pegasus.

As just mentioned, the present stunt rules being what they are, we are forced to conform to a general configuration. Since the Pegasus must compete under these rules, it conforms, generally. I have followed my usual practice in stunt-model design of locating both the wing and tail chord-lines on the engine thrust-line. This tends to make the model fly more symmetrically about the pitch axis, which is of prime concern in stunting.

The NACA 63018 airfoil is used with a standard flat-plate flap added inboard of the tail booms. Outboard of the booms the result is a reflex-type airfoil gradually changing to the standard 63018. Therefore, we have what is really a 15 per cent thick root airfoil increasing to an 18 per cent airfoil at the tip section. I've used this arrangeinent on other models and found it very satisfactory.

Construction can begin with the wing and the first step is to cut all the ribs from 1/16 sheet balsa. Splice the 1/16 x 1/2 in spars into full span lengths and mark the proper rib locations on them. Notch the trailing edge accordingly and assemble the ribs, spars and leading and trailing edges. This forms the basic framework to the wing. Add the 1/16 x 1-1/4 trailing edge sheeting inboard of tail boom locations. Note that outboard of the booms, trailing edge sheet is cut from 4 in wide stock to shape indicated and contact-cemented together.

Next add the 1/32 sheet spar-web with the grain vertical (perpendicular to the chordal plane) in order to obtain an extremely strong and warp-resistant wing. Observe from the plans that the forward lead-out must have a 'cross-over' hole provided for it through the 1/32 sheet between ribs C and D. Provide a 1/2 in plywood bellcrank platform. between the center ribs and install the bellcrank (nylon preferred) with lead-outs attached..." 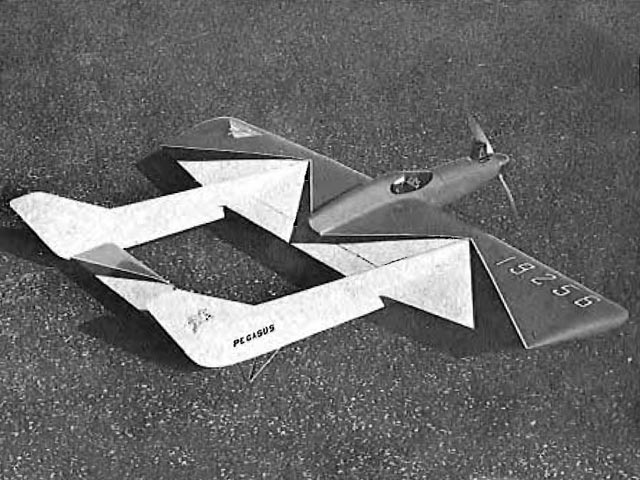