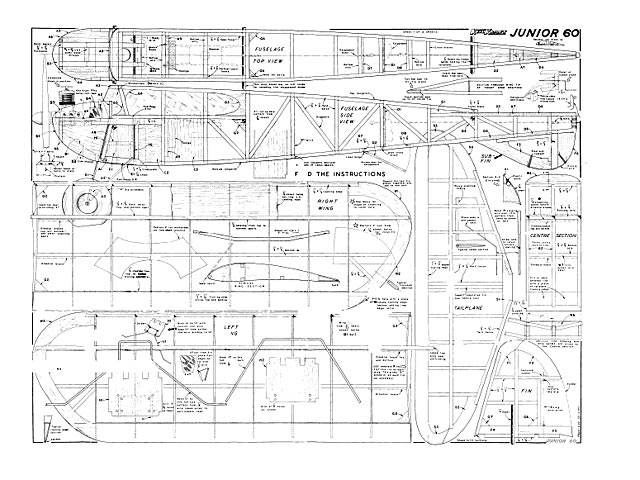 Quote: "When looking for a plane in which to install his gear, the radio modeller turned naturally to a model which had proved itself in the free flight field and the Junior 60 seemed an obvious choice. This choice was well justified and the Junior 60 soon became the standard radio model, just as years before it had been the standard power model. In 1955, the model was re-kitted, to bring the plans up to date. An E.D. Racer was shown on the plans and also the installation of radio equipment. Apart from widening the fuselage a little to allow more room for radio gear and showing a suitable rudder, little change was made to the model itself."

For more detail on this design process, see RCLibrary page at http://www.rclibrary.co.uk/title_details.asp?ID=1069 for free download of the complete book 'Radio Control Big Four' from 1964, which contains a section of several pages written by Ernie Webster detailing the design changes between the original KK Junior 60 and the later KK Super 60 (oz552).

Note the actual wingspan of the Junior 60 is (rather confusingly) 63 inches. For reasons unknown, Keil Kraft continually referred to it and advertised it as being 60 inches in wingspan. Many thanks to Brian Cox for help with this.

Update 14/10/2017: Added sheet #2, build notes, thanks to DaveH. Quote: "Hello Steve... Thanks for all the work you've done, I've built a couple of models from Outerzone sourced plans (Smeed Courtesan and Super Scorpion), and I enjoy browsing the site. I also have another sheet of the KK Junior 60 plan which, amongst other things, details the wing tip sheeting and the flat bottom of the centre section ribs. These being two of the more common mistakes (or different choices) I see made. Is this of any use to you? Cheers, Dave"

The Junior '60' is a time-honoured sports design which was adopted in the early days of R/C flying as a standard machine, appearing in a variety of forms, such as extended wings for greater area, ply-sheeted fuselage back to the rear of the cabin position, and sometimes overloaded up to 6 or 7 lb flying weight. Whatever the modifications adopted, these models flew, and flew well, but the original layout would still more than hold its own with any for R/C work.

Right up to the present time, in fact, most people experienced in radio flying would be the first to recommend the Junior 60 to anyone starting this branch of the hobby. The size was right, the design was right, and its payload capacity well within any standards of workmanship, plus as much radio gear as could be accommodated within the fuselage. Above all else it was a really stable aeroplane which, on being left alone, would quickly sort itself out from any trouble which it had got into through real-operation of the control button. And all through, remember, this kit model was produced as a sports type F/F design.

Now the Junior 60 has reappeared, somewhat modified in detail design, and expressly intended for R/C work. The fuselage is rather more capacious, especially in the cabin area, whilst complete details are given for the installation of the radio gear, batteries, etc, together with a pivoted rudder and the necessary intermediate linkage.

The kit itself is most attractive, with 'integral' strip lengths die-cut, clearly printed sheet, etc. The structural design is quite orthodox and the kit itself straightforward in contents. All the ply parts are ready cut to shape (including that especially tricky job of making dihedral braces without notching vital bends), the set of finished wing ribs are more accurate than the majority of amateur builders could produce, whilst the balsa quality is uniformly excellent, although tending a little to the soft side. Four giant tubes of cement and four tubes of tissue paste are also included, as well as shaped blocks for the cowling, wire, dowel and really tough (beech) motor bearer stock.

We know from experience that the structure is more than rugged enough for R/C work, and also that it is quite straightforward for building. Not even a beginner should get into any real trouble with assembly.

Design-wise, the Junior 60 is an orthodox cabin layout with a low wing height, generous dihedral coupled with relatively large fin area, and a certain amount of sub-fin area which could be expected to improve stability in turns. Both the tailplane and fin are flat plate sections. Were we asked to recommend R/C design features most likely to be foolproof, our experience in this field would say wing height above thrust line fairly small, flat plate tail and fin sec-tions, generous wing dihedral to make fin area non-critical and balancing with CG well forward. Just the layout, in fact, that the Junior 60 employs. The only design feature we would criticise is the undercarriage position. The track is rather too wide and the wheels too far forward for good straight take-offs an roughish ground, but such a layout does give better ground stability on landing. You cannot have it both ways and since a model always has to land, but can be hand-launched, this is quite a logical solution for a kit designed for general consumption.

Modification of the undercarriage could, in any case, upset the balance of the finished model. The nose is extremely short for an RC design and so it is rather important to keep the tail end light and the nose end relatively heavy to balance on the wing front spar." 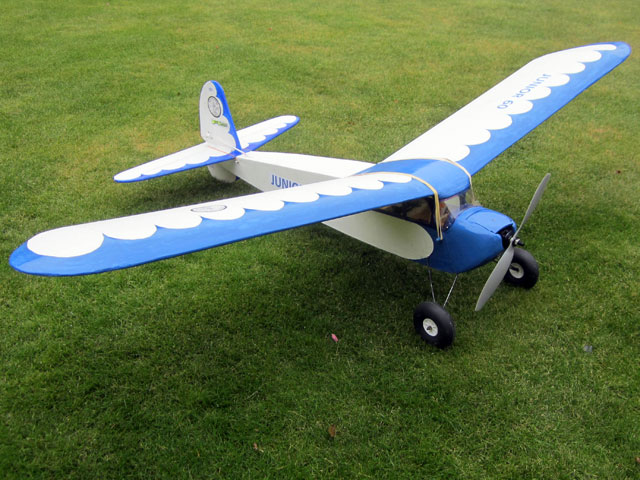