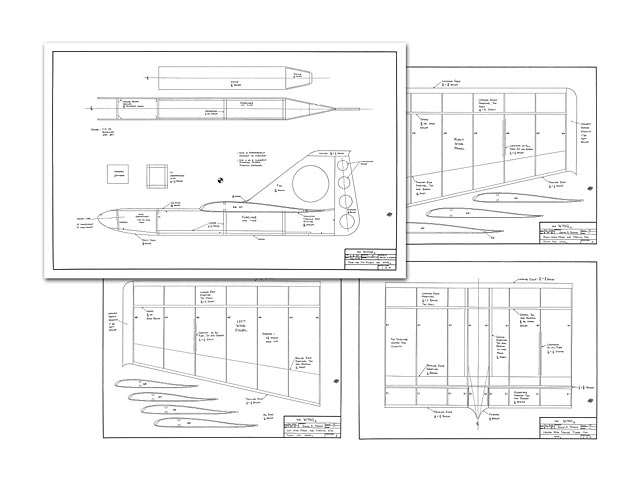 Quote: "The Wing A. Building and flying tips, by Bruce Tharpe.

Design Overview: This was definitely one of the most enjoyable models I ever designed and built. I'm kicking myself now because the photo at right is the apparently the only one that exists. In those days I was more interested in drawing, experimenting, and flying than in taking photos.

This was a follow-up to my earlier design, the Wing (oz13975), and was influenced greatly by similar plank-style wings by Dave Jones and others that appeared in magazines back in the 80's like the Raven (oz12696) and Windfreak (oz5725).

Wing Construction: Looking at the plans, this is not what I would call a complex design, but it will require some real craftsmanship and sanding skills to do it justice. There's nothing major that jumps at me that requires changing or modifying in the wing - it just requires careful building. A builder could incorporate ailerons in the outer wing panels if desired, but the rudder works just fine for the kind of flying this bird was intended to do. The upswept vortex wingtips always looked good to me, but are not necessary for success.

Fuselage Construction: The prototype did come out a little nose-heavy. I remember thinking the fuselage could be a little shorter in the nose, maybe an inch, to help with balance. I'm not sure how the elevator linkage was rigged on my model. It probably used a pre-formed elevator joiner with a center control horn (like a control-line model). If you look close at the photo, you will see a couple of tiny wheels on 1/16 music wire legs. This landing gear was removable and only used when landing on a paved runway.

Finishing Up: The large hatch on the bottom makes radio installation a breeze. There's lots of room to slide your battery fore or aft for proper balance. My model was covered with transparent yellow Monokote, mainly because I wanted to see those pretty lightening holes in the fin and rudder. Monokote was also used to hinge the elevators.

Flying: At its heart, this is a powered glider. My model had a very reliable throttle, so most flights were spent just putting around low and slow. After it seemed like the fuel was low, full-throttle would get it up to altitude quickly. When the tank ran dry, the remainder of the flight was peaceful soaring. I didn't generally go looking for thermals, but would stumble into them once in a while and extend the flight. And I always enjoyed the challenge of landing dead stick as close as possible - some landings were better than others.

Other times I would go to full throttle and let it rip through all kinds of wild stunts. I wasn't a very sophisticated pilot back then, so it was just a blur of crazy, loopy, barrel rolling flopping around. Surprisingly fun! Hope you enjoy the model as much as I did, and would love to see photos of your creation." 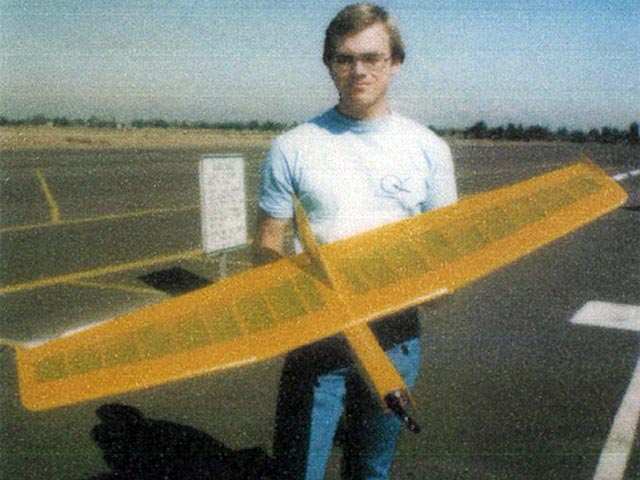