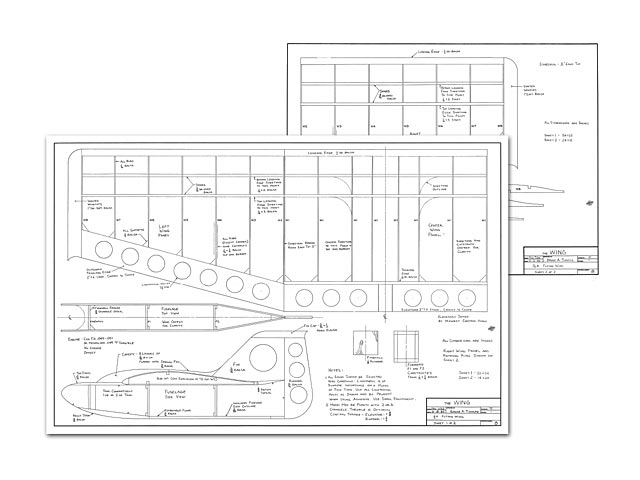 Quote: "The Wing. Building and flying tips by Bruce Tharpe.

Design Overview: This design was inspired and influenced greatly by similar plank-style wings by Dave Jones and others that appeared in magazines back in the 80's like the Raven (oz12696) and Windfreak (oz5725).

Wing Construction: One thing that I might change if building another would be to sweep the top spar forward in the outer panels to keep it at the high point of the airfoil. It would wind up directly above the bottom spar at W-8. A builder could incorporate ailerons in the outer wing panels if desired, but the rudder works just fine for the kind of flying this bird was intended to do. The upswept vortex wingtips always looked good to me, but are not a necessity.

Fuselage Construction: I'm pretty certain this model needed some
nose weight for balance. It would be easy to extend the nose a couple of inches to help with this. Also, add 4° or 5° of downthrust to the firewall - my model looped out the first launch (surprise!). I'm not sure how the elevator linkage was rigged on my model. It probably used a pre-formed elevator joiner with a center control horn (like a control-line model). I do like the look of the little balsa canopy shown on the plans, but was apparently too lazy to actually build it. Finally, the fin looks small, but I don't remember it having any bad flying habits. It shouldn't cause any problems if you want to enlarge it for aesthetic reasons.

Finishing Touches: The large hatch on the bottom makes the fuel tank and radio installation a breeze. My model was covered entirely with transparent yellow Monokote, mainly because I wanted to see those pretty lightening holes. Monokote was also used to hinge the elevators. Back in those days, it was all about the airplane - I didn't spend much time working on color trim schemes or thinking of clever model names (obviously).

Flying: The final balance point was determined with numerous hand glides, free-flight style, over tall grass. At its heart, this is a powered glider. My model did not have a throttle, so most flights were spent cruising around with an occasional loop or sloppy barrel roll, followed by a long climb to altitude. When the tank ran dry, the remainder of the flight was peaceful soaring. I didn't generally go looking for thermals, but would stumble into them once in a while and extend the flight. And I always enjoyed the challenge of landing dead stick as close as possible - some landings were better than others. Hope you enjoy the model as much as I did, and would love to see photos of your creation." 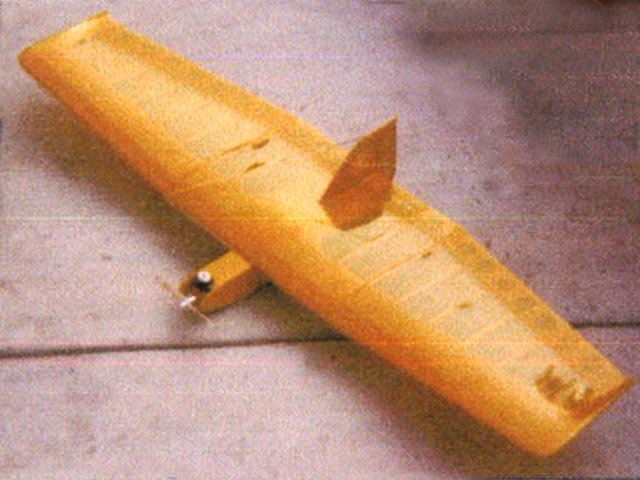