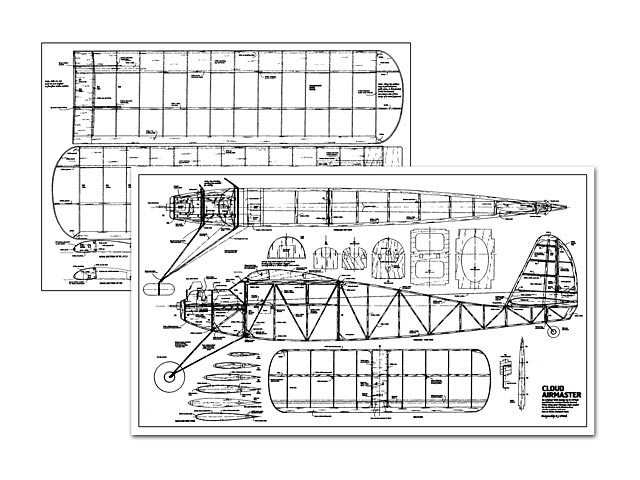 Note the original RJ O'Neil designed Cloud Airmaster was first published in 1938. This here is a later redrawn (and redesigned) plan from 2011.

Cloud Airmaster. A step into the past - where angels fear to tread. Continuing our series of plans revisited, I have chosen the Cloud Airmaster, that featured in the February 2000 issue of Model Flyer. There is quite a history to the design and the original model featured here, so I think it is definitely worth a second look.

Ken Swailes' intro: With a vintage theme for the February issue of Model Flyer, the editor was looking for a suitable subject for the feature plan in the magazine. Searching through some long undisturbed vintage plans, including ones from G Fisher, I came across a series of drawings of the Cloud Airmaster. When I say a series of plans, I am referring to the original size, seven foot wing span Airmaster', plus a 66% size for R/C rudder and elevator and a 50% size free flight version, the original being powered by an Amco .87cc diesel. These drawings were the work of Mike Benwell in the early 1970's (see Alex lmrie's history of the model) and with them was a letter from Mike, also from the 70's.

Because Mike had owned the original 'Airmaster' I assumed, wrongly, that his drawings were based on the original drawings. Mistake number one. Visiting Alex Imrie, the present owner of the 'original' model, in 2000, showed considerable differences between the drawings and the model - but was the model modified or original? At this point I decided to 'design' the model for the magazine with all of the outlines as near to the original as possible, but modify the structure, where necessary, to meet the R/C 'guided free flight' adaptation of the 'Airmaster', hence the title 'vintage style'. But over to Alex for some of the history of the design and the existing model.

Alex lmries' report: Designed by RJ O'Neil and manufactured by Cloud (Model) Aircraft of Dorking, this mid-1938 design was a slab-sided, high-wing, cabin monoplane of 7 feet span using the well proven Grant X8 aerofoil section and weighed 4-1/2 lb ready to fly. Suitable for any 1/5 hp engine, Cloud recommended the use of the Dennymite, although their prototype was fitted with the Ohlsson Gold Seal.

This robust model was completely stable in flight with a very steep climb and had an exceptionally slow flat glide. It was also stable on the ground due to the wide wheel track, but the forward location of the wheels (a normal practice to protect the engine in less than perfect arrivals) could cause trouble during ROG take-offs until the tail rose into the 'flying position'.

The Cloud company (also known as Surrey Industries Ltd) was owned by Dunn & Co, the outfitters, famous for their large range of headgear. It is not known how O'Neil, who was a keen rubber competition flyer in the mid 1930's, managed to get the Dunn backing, but this transformed the company, which expanded into one of the specialist suppliers of model accessories in the immediate pre-war period. With premises at 304 High Street, Dorking, large consignments of American merchandise were made available, the emphasis being on power models.

By mid 1938, Cloud had the services of 'an engine expert' and were offering to service 'all makes of petrol engines'. The engine man was JS Colyer (who later produced the Majesco petrol and diesel engines) he had already built an engine and with financial help from Dunn for the purchase of milling and honing machinery entered into engine production with the 3cc Cloud and the 3.8cc Cloud Hurricane. Both O'Neil and Colyer participated in power competitions, Colyer flying a Brown Junior powered Blue Dragon in the 1937 Bowden Contest, while O'Neil placed 16th (out of 38 entries) in the 1938 Sir John Shelley Cup contest presumably with the prototype Airmaster.

The kit came in a strong corrugated cardboard box measuring 38 x 8 x 6 in, and was decorated with the familiar blue and white cloud effect used by this manufacturer. The price compared well with those of the imported American kits. It was cheaper than the Denny 'De Luxe Junior', being the same price as the Ohlsson 'Pacemaker'. There were of course, cheaper power model kits to be had, but the Airmaster was always seen as a quality British product. No information is available on numbers sold, or the model's popularity - it was a 'no-nonsense' practical flying machine, but does not feature frequently as a 'reader-built' model in the illustrations shown in the magazines of the day.

Original Airmaster: In late 1972, Mike Benwell from Milton Keynes advertised this model in Aeromodeller. I was immediately attracted to it since it was powered by a taper-fin Ohlsson Gold Seal that I wanted and bought the model for the engine. The model had apparently been made in 1939, by a gentleman called McAlpine, a member of the Luton club. It had been partly restored and although some original components were covered in either silk or bamboo paper, certain parts had been re-covered in nylon.

The reason for the sale was the model was 'just too large' and Mike had in fact already drawn up plans for a half-sized version to be powered by the Amco .87, this drawing was dated 15 October 1971. Later, in May 1977, he drew up a 2/3 size Airmaster for single channel R/C (rudder only) and this drawing was used by Peter Fisher, John Kemp and Tony Penhall to make good flying sports models, which used to pollute the Biggleswade Common air in the early 1980's.

In both of these reproductions, Mike used his own structures, there being no need to duplicate the rather intricate original construction. Eventually, some modellers wishing to have a Cloud Airmaster in the original size, did so by enlarging the smaller scale drawings. Since their origin had long been forgotten, these bigger models looked like Airmasters, but structurally were quite different to RJ O'Neil's masterpiece.

In 1975 I eventually completely stripped and restored the original model. Covered in nylon, and painted in red and silver in a similar manner to the Cloud's original, it carries my old SMAE petrol registration of 'A12' on the rudder. The engine fitted is a Brown Junior Model B and the model was flown frequently in the late 1970's early 1980's, until the sheer size and difficulty of transporting it to and from my rather small-sized flying field caused me to concentrate more on smaller powered models that could be more easily operated. So the Airmaster did not do as much flying as it might have done.

Boddo takes up the story: With the drawings prepared and construction of the model - by Ken 'Pre-war' Swailes - started, your editor had a belated brainwave. Who was most likely to have a copy of the original plan? Keith Harris, of course, I really should have thought of this source (he has a staggering 10,000 plans and drawings) before and a telephone call confirmed that it was one on his list. By the time I collected copies of these, the original Cloud kit plans, it was too late to change the structure of the new model and so it is presented as vintage style - ie, not following the original strusture to the Nth degree... " 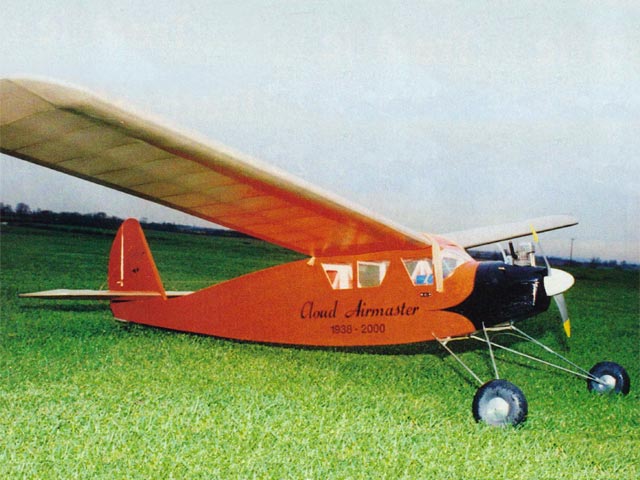 A pity the plans are low resolution, otherwise, they make up for a fine, well-engineered model.
However, what shines here is the fascinating three-author article!
Miguel - 28/07/2022
Add a comment