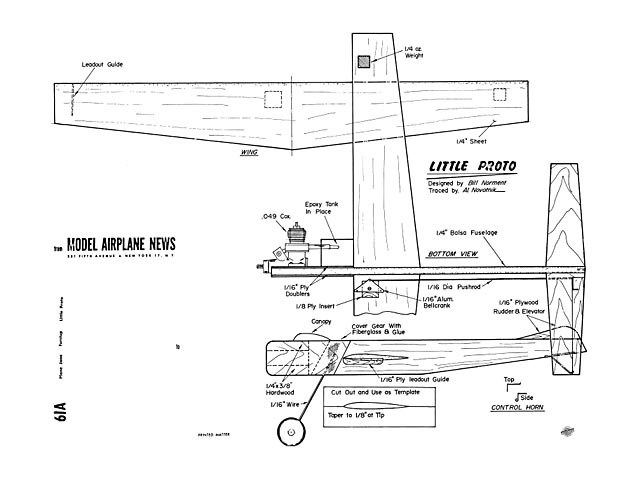 Quote: "Designed primarily for the junior members of the author's family, this 1/2A Profile Proto can also double for a 1/2A winning speed model. Excellent trainer for each event. Little Proto, by Bill Norment.

Much has been stated about promoting events which will attract juniors into the model airplane sport or hobby, whichever you prefer, but little seemingly has been done about it until recently.

Since the change by AMA in junior proto rules, the junior pilot and newcomer to the sport now feels that he can build a plane which has a good chance to compete with others. This has been brought about since juniors may now compete in 1/2-A Proto with profile planes.

All of this is excellent, but what about the youngster who is just starting, or wants to start, but doesn't have anyone to design a plane for him? Or maybe he doesn't have access to bass wood and birch and redwood and all of the other hardwoods which the contest boys use! There aren't any profile speed kits on the market, so what happens? Nothing! And we lose another junior.

All of these facts prompted the design and building of the Little Pro, since I have two boys who have just turned 8 and 10, but who can not yet sit down to one of today's complicated kits, read all of the special lingo, and come up with a finished contest plane from scratch. With the Lil Pro, that is possible.

The plane, powered by a Tee Dee .049, is built of balsa, except for 1/16 plywood doublers at the engine mount, and 1/16 plywood stab and fin. While not as fast as the souped up ships with enclosed engines, it serves its purpose well in ease of flying and building. Building time for the experienced person could be an evening, or several evenings for the inexperienced junior, which is just long enough so that he will not lose interest in the project and shelve it for something else to do.

Not only is the Little Pro a good ship for juniors, it is also a good practice plane for the more experienced flyer who is interested in getting the feel of speed for the first time. This size plane is very light, only five ounces, and even if there is a crackup, chances are that you can pick it up and put it right back into the air.

Flying the plane with two lines for the beginner is very easy. It jumps off the ground with little effort without doing a wingover, and then grooves around the circle at any height which you place it. While not as fast as the regular speed ships, it should hold its own in junior competition, and the speed and ruggedness of the plane also makes it an ideal plane for a junior to become accustomed to the speed phase of the program.

In making the initial tests with the Little Pro, a stock Tee Dee .049 was used, and results were extremely pleasing. Using Missile Mist fuel and a 6-4 nylon prop, the plane was timed for 10 laps in 33 seconds, almost 56 miles per hour. The Tee Dee proved hard on glow plugs, however, and it was found that a Babe Bee plug stood up under the strain much better, although there was a slight loss of power from the standard TD plug..." 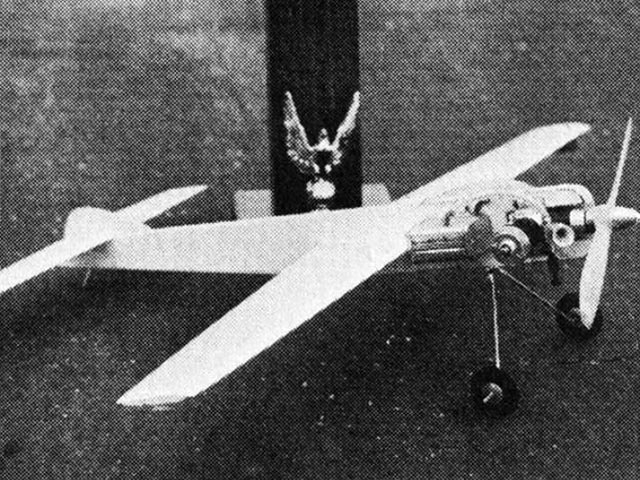