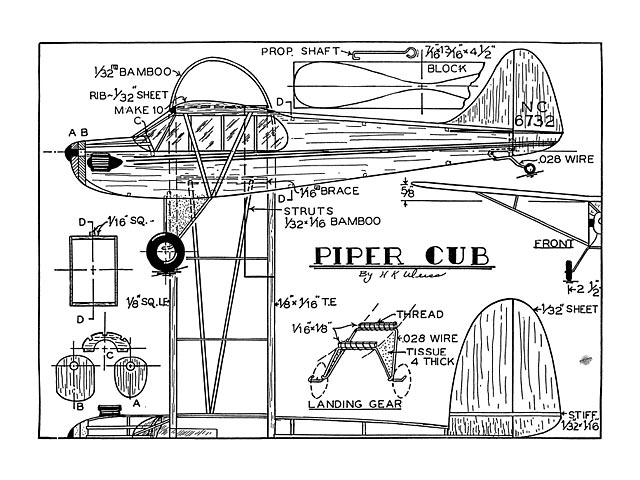 America's most popular airplane today, the Piper Aircraft Corporation's 'Cub', is the first ship to really break into the vast potential market of the air-minded public. The Cub is not yet a 'thousand dollar airplane,' but it is very near to it. With dual controls in an effectively furnished cabin the Cub seems to be giving its owners what they want, as is evidenced by the fact that over a third of all commercial airplanes sold today are Cubs.

Most significant in view of the large volume of Cub sales, is the fact that the Cub's top speed is only 84 miles an hour - fine for such a low powered ship, but nevertheless indicative of the intention of Cub owners to fly as they would drive their cars, safely and with economy.

Both aviation and the automotive industry owe much to the first wild spirits who burned the road and air in tricky experimental contraptions, but their number has always been small. A greater development from their beg,itmings requires the support of many enthusiasts. The Piper Corporation is leading the way in introducing to aviation a large and permanent group of supporters, to the eventual benefit of everyone concerned with aviation.

Our model this month has been designed for extreme simplicity. Because of the light construction, it flies very well.

Fuselage: With a sharp razor cut out two fuselage sides from 1/32 sheet balsa. The outline can be traced on the balsa by putting a sheet of carbon paper under the plan with the balsa under the carbon, then tracing the plan lightly with a sharp pencil. The rudder and stabilizer can also be traced and cut out of 1/32 sheet balsa at this time. Sand the pieces smooth on both sides with fine sandpaper.

Now cement the two fuselage sides together at the tail post, using a short piece of 1/16 square balsa as the tail post. Cut out former C from 1/16 sheet balsa, and A and B from 1/8 sheet balsa.

Cement the cross braces in place just at the rear of the windows, and follow these with the 1/8 x 1/16 braces at the landing gear. Add former C. Cement A and B together, and attach them to the nose of the fuselage as shown on the plan, using pins to hold them in place until the cement is dry.

Wing: The wing is of standard construction. Make it in one piece, leaving the leading and trailing edge in rough form, and sanding them to airfoil section alter assembly. The bamboo wing. tip can either be bent over a candle flame, or as the bamboo bends freely. simply bent and tied into place with thin thread while the cement is drying.

Assembly: Sand the wing and fuselage again to remove any projections which would spoil the covering, then cover them carefully with tissue. Colored tissue may used in any color scheme to suit the individual builder. Spray the covered parts lightly and allow them to dry, Sand the 'fuzz' from leading and trailing edges and tack down loose edges of tissue with dope.

Now cement the wing to the fuselage, scraping the tissue from the frames at the joint so that the cement can hold the balsa. Add the tail surfaces, wing struts and wheels. The tissue-covered parts can now be given a coat of very thin dope if desired.

Carve the propeller from a block of medium hard balsa to the size shown.

Flying: The original model flew very nicely on two strands of 3/32 rubber, using about an inch of slack with a winder. A heavier model will need two strands of 1/8 rubber, and can probably take almost two inches of slack. The potentialities of these small models are surprising. Our Cub flies half a minute consistently indoors and rides the outdoor air very stably.

The usual adjustments are made in balancing. If the ship stalls add small hardwood wheels or dope the prop. If it dives warp the trailing edge of the stabilizer up. If the ship stalls under power do not apply down thrust, but instead note the direction in which it tends to circle. Then apply rudder in this direction and warp the trailing edge of the inside wing down to prevent spiral diving, if necessary. The model should then climb in a tight spiral under the initial burst of power."

Update 24/7/2022: Have rescaled this plan to 12 in wingspan. I am guessing this scan had been doubled in size (to 24 in) and that half of that at 12 inches is correct. Many thanks to vicnippert for spotting this. 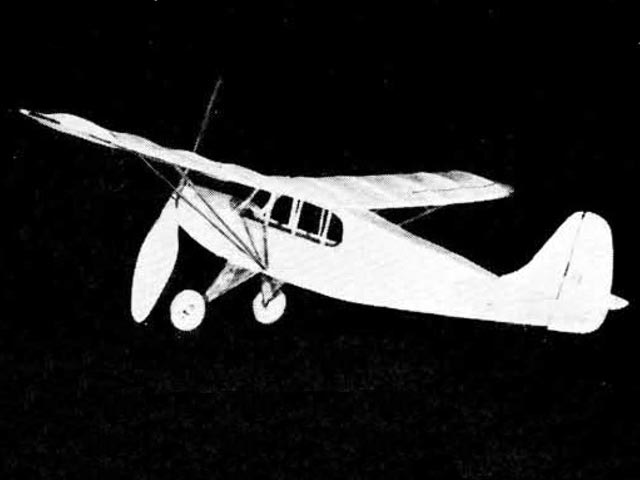 The Weiss Piper Cub plan is a lot closer to a Taylor J-2. I always wondered if perhaps he started drawing it just before Taylor and Piper had their falling out then just finished it with Piper J-3 rear windows. In any case it builds into a lovely model, I should get some pictures of mine for the site.
TimE - 25/07/2022
Add a comment