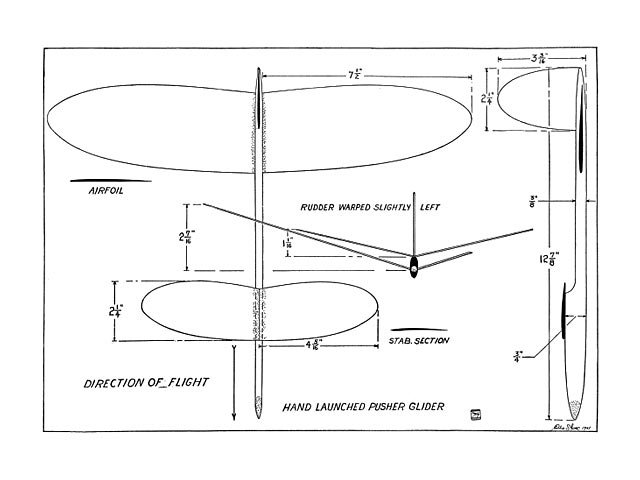 Pusher Gliders, although not as popular as tractor types, are nevertheless exceptionally good performers. The following instructions and accompanying plans, it is hoped, will go towards making this type glider more popular. But we'll let the facts - or rather, the performances - stand by themselves. Good outdoor weather will certainly make the opportunity possible.

Carving the Fuselage: The plan is is exactly half scale. Measurements may be taken from it accurately by using a scale rule or a pair of dividers. Draftsman curves will also be useful in obtaining the correct outlines for the elliptically shaped wings and tail surfaces.

Make a full-size drawing of the fuselage on a piece of stiff paper or flexible cardboard. Trim this with a pair of scissors and proceed to trace its outlines onto a piece of hard balsa measuring 1/4 by 3/4 by 12-7/8 in. This piece should be hard throughout and perfectly free of knots. A sharp knife is used to obtain the final shape. Next, use coarse sandpaper to trim down to the line limits. The cross-section shown in the front view is consistent throughout the length of the body. In effect, it is egg shaped. This sectional outline may be obtained by using sandpaper only. Finish the stick off with a very fine sanding.

Wing and Tail: Use stiff paper templates for the wing and tail parts. For the wing one template is necessary for both panels, as is for that matter for the elevator. Cut to the proper size and width, the template is laid flat upon a piece of sheet balsa measuring 3/32 x 3 x 7-1/2 in, and its outlines faithfully traced. The shape of the elevator and rudder are also traced on a piece of sheet balsa, measurements of which are given above.

A balsa cutting knife is ideal for trimming the parts. Cut as close ti) the lines as possible and sand down the rest to its true outlines later. Take the wing first and proceed to sand it to shape so that the camber or airfoil section is faithfully reproduced as shown by the solid black form on the plan. Getting the correct airfoil section is very important, for therein lies the quality that goes to make an excellent performing craft.

Taper the wing tips down to a fine degree so that when they are held up against a light at least a quarter of an inch margin around the tips allow the light to come through.

The elevator is made in one piece and is sanded to shape so that its airfoil section conforms to that shown in the plans. Note the slight undercamber and the sharply pointed leading edge. The rudder is simply cut to shape and streamlined as shown by its top view outline on the fuselage stick.

Assembly and Flying: To assemble the parts, first stand the body on edge perfectly. Then hammer on each side two fair-sized pins so close to the stick that the stick remains upright. The best place to install these pins is about one inch back of the nose and at any point between the elvator and wing. While the body is in this rigid jig, you may apply cement to the portion of the stick where the elevator will be attached. This portion measured direct from the plans should be marked off and that part sanded so that the place is slightly flat, allowing more gluing area for the elevators. Apply cement to the position and then additional cement to the center halves of the elevators. Press the parts in place and insert small model making pins so that while the parts are drying, the dihedral angle may be set at the same time. Use small 'prop' blocks under the extreme ends of each wing tip to get the required angle. Apply additional cement along the center of the crack.

The wing panels are cemented to each side of the body at the rear end as shown in the side view. This part should have been previously marked off. Apply cement_to each side of the body and the wings and attach one panel at the time. Insert model making pins to hold the required dihedral angle in position. Next, add the remaining wing panel. Again use small blocks at the wing tips to hold the angle until the cement hardens sufficiently to allow their removal.

Cement the rudder in position as shown. Later, it can be warped slightly to the left as required. The shaded areas around the wing and tail parts indicate the position where the greatest strain is imposed and therefore additional cement should be applied around those regions. This should be done on the underside as well.

When the ship is complete it is then ready to receive coats of dope.

The author's Pusher Glider performed best when circling to the left and seemed to reach higher altitudes in tight turns. On the way down,however, it would sail straight ahead. The best time yet accomplished with this ship has been well over five minutes. Its average time, however, fluctuates between 45 and 50 seconds." 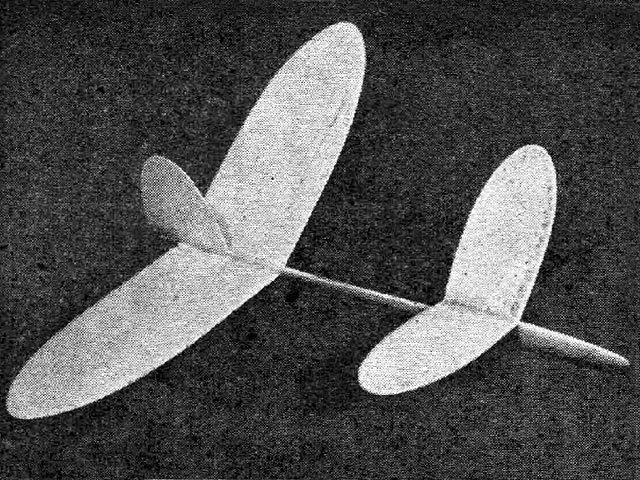