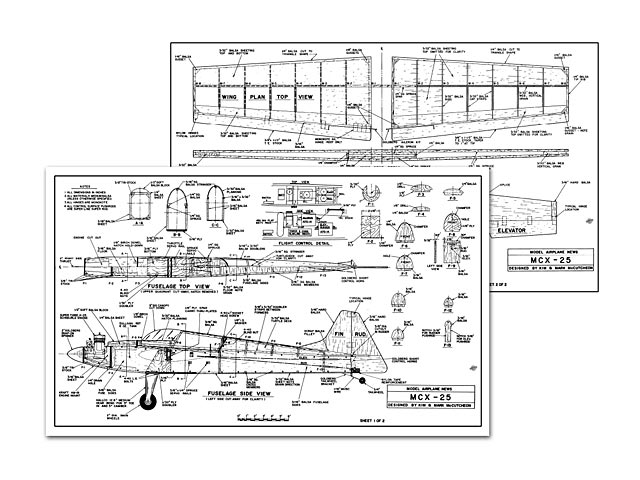 Quote: "MCX-25, by Mark and Kim McCutcheon. AFEW YEARS ago I began experimenting with .25-size ships. I was searching for true aerobatic performance without the greater costs of the larger .40 and .60 ships. This was a challenge in that it required much closer attention to weight and aerodynamics to compensate for lower Reynolds Numbers and lack of excess power. I found existing .25 kits to be generally inadequate, but modifications did produce one ship that flew admirably. However, after a radio failure put me back on track, I decided that an entirely new design was in order.

Armed with the valuable technical assistance of Al Clark, an aeronautical engineer and nationally competitive glider pilot, my brother Kim and I set out on a three-month grind of evaluating, designing, drawing, building (with intermittent bloodletting), and testing of the MCX-25. Our parameters were to build a small economical ship that would in every way match the capabilities of its larger counterparts.

The ship is built around the excellent Super-Tigre X-25 Schnuerle engine from World Engines. We chose this powerplant for its good power-to-weight ratio. A 6-ounce tank gives a 12- to 14-minute wide-open run and we used a 9x4 prop.

The airfoil is NACA 632-015 15% symmetrical with a 35% highpoint. The wing and stab are positioned directly on the thrust line with similar fuselage areas above and below, and the aft fuselage and ,fin are designed to give about 40% rudder below the thrust line and still look somewhat scale.

After experimenting with landing gear placement in relation to the CG, we configured the ship conventionally because of preference and added efficiency. The result was a docile ship as tail-draggers go. It has no tendency to tip and has to be nearly forced into a ground loop. A high, thin fuselage aids in knife-edge and hesitation maneuvers, and doubles to offer plenty of radio room for a Kraft KPS-14 and smaller size systems.

Construction is of traditional balsa, ply, and spruce with built-up I-beam D-tube wing and box fuselage. We chose, fixed wings for simplicity and low weight, and its relatively short 44-inch span fits into my Honda with ease. The 51-ounce all-up weight and 20-ounce-per-square-foot wing loading give a flat glide and a power loading you wouldn't believe.

CONSTRUCTION: Accurately match-cut two 2-1/2 x 1-5/16 inch spar carry-through plates from 1/8-inch plywood. Cut the 2-1/8 front aileron servo rail from 1/4 in ply or spruce. Drill servo mounting holes. Epoxy the servo rail to the back side of the rear spar carry-through plate. This should be very accurately positioned. Match-cut two fuselage sides from 3/16 balsa. Mark the position of the formers, doublers, servo rails, etc. Match-cut two 1/32 ply doublers and 1/4 in spruce stiffeners to each fuselage side. 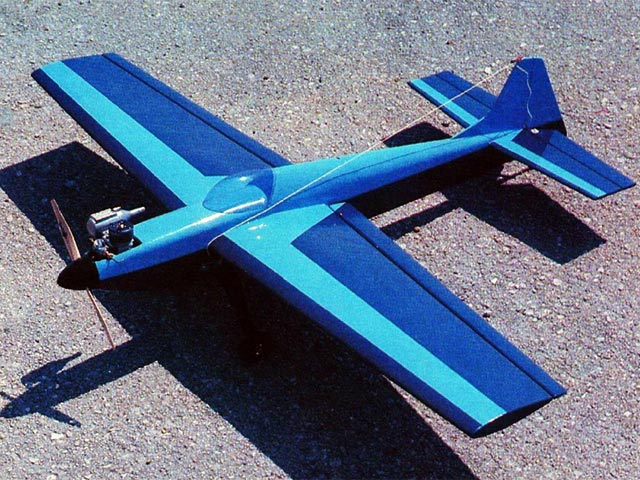