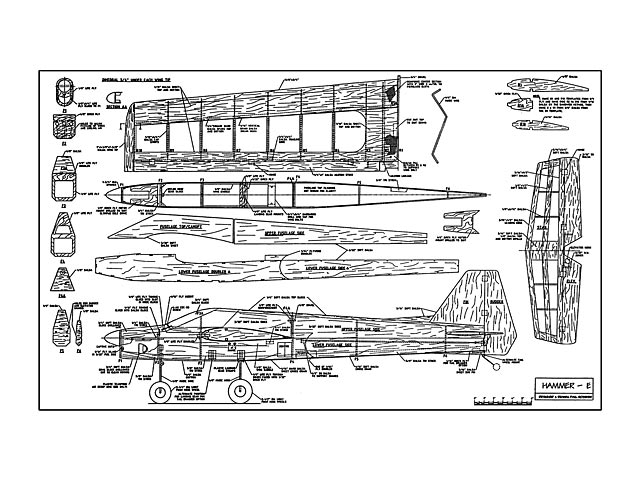 Quote: "Hammer-E, by Paul Rossiter. I believe that smaller, high speed and often quite costly hand launched models simply do not appeal. This model has generated far more interest amongst IC fliers than more spectacular and specialised models. It generates expressions of amazement on faces of IC pilots as it taxis quietly into position, lifts off after a short run and proceeds to gracefully carve up the sky for 6 to 7 minutes.

Design Considerations: For some time, I had been looking around for a design for a typical 40-sized club model that would appear and perform the same as other glo powered club models, including taxiing and taking off from the ground. However, I also wanted it to use a cheap motor and regular sized radio gear to keep costs down. I believe that all of this is necessary if more fliers are going to be lured towards electric power - smaller, high speed and often quite costly hand launched models simply do not appeal.

Kits such as the Sig Four Star 40 and Great Planes Super Sportster 40 were possible candidates if modified to keep the weight down, but I finally decided to start from scratch with a model designed for the purpose. It would also work out considerably cheaper than kit bashing.

Motor choice: The Robbe/Graupner Speed 700 motors seemed to offer a lot of potential, providing good power at low cost, but I have not been terribly impressed with their performance on direct drive and there seemed to be no cheap gear or belt drives available. However, I saw an article in the July 1994 issue of Radio Control Model World that described a simple adaptor to fit a cheap MFA Olympus belt drive to the 700 sized motors. This drive was never intended for motors of this power, but a phone call to Paul Channon in the UK indicated that, provided a soft start or proportional speed controller is used to avoid high start-up loadings, the unit gave reliable performance with up to 14 cells. It also had the considerable advantages of light weight and low cost. Details of the adaptor are given on the plan and finished adaptors, together with the new belts required, are available from myself or Paul (addresses at the end of the article).

Having decided upon a suitable power source, I then started to think about the airframe. The Speed 700 and 12 x 1700 mAh cells combination weighs 36 ounces, indicating a total model weight of around 72 ounces. A design wing loading of 20 ounces per sq ft then gives a wing area of about 3.5 sq ft. This was obtained with a tapered wing of 58 inch span, 10 in root chord and 7.5 in tip chord. I chose a 15% section to keep flying speed down, particularly in vertical descents.

Assuming a power loading of around 70 watts/lb requires a power of 315 watts i.e. 26 amps from 12 cells, ideal for the Speed 700 Turbo 9.6V, confirming its suitability for this application. The NACA 2415 wing section has been flattened from the lower spar to the trailing edge to facilitate building and thinned somewhat at the trailing edge to match readily available TE stock.

The fuselage and empennage profiles have their origins in the Dick Sarpolus Hammer family of designs the Hammer 20 (oz10680) and Hammer 40. An Electric Hammer (oz10647) version of these was published by Bob Peru in May 1988 Flying Models for geared or direct 05 motors and seven 900mAh Nicad cells. To my mind the model was too large for 05 power..." 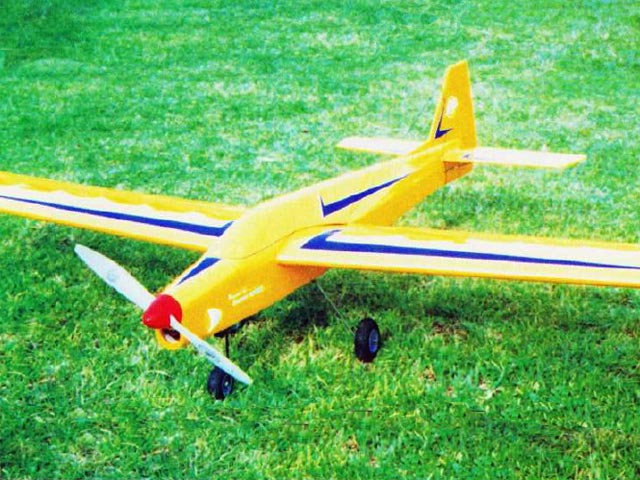